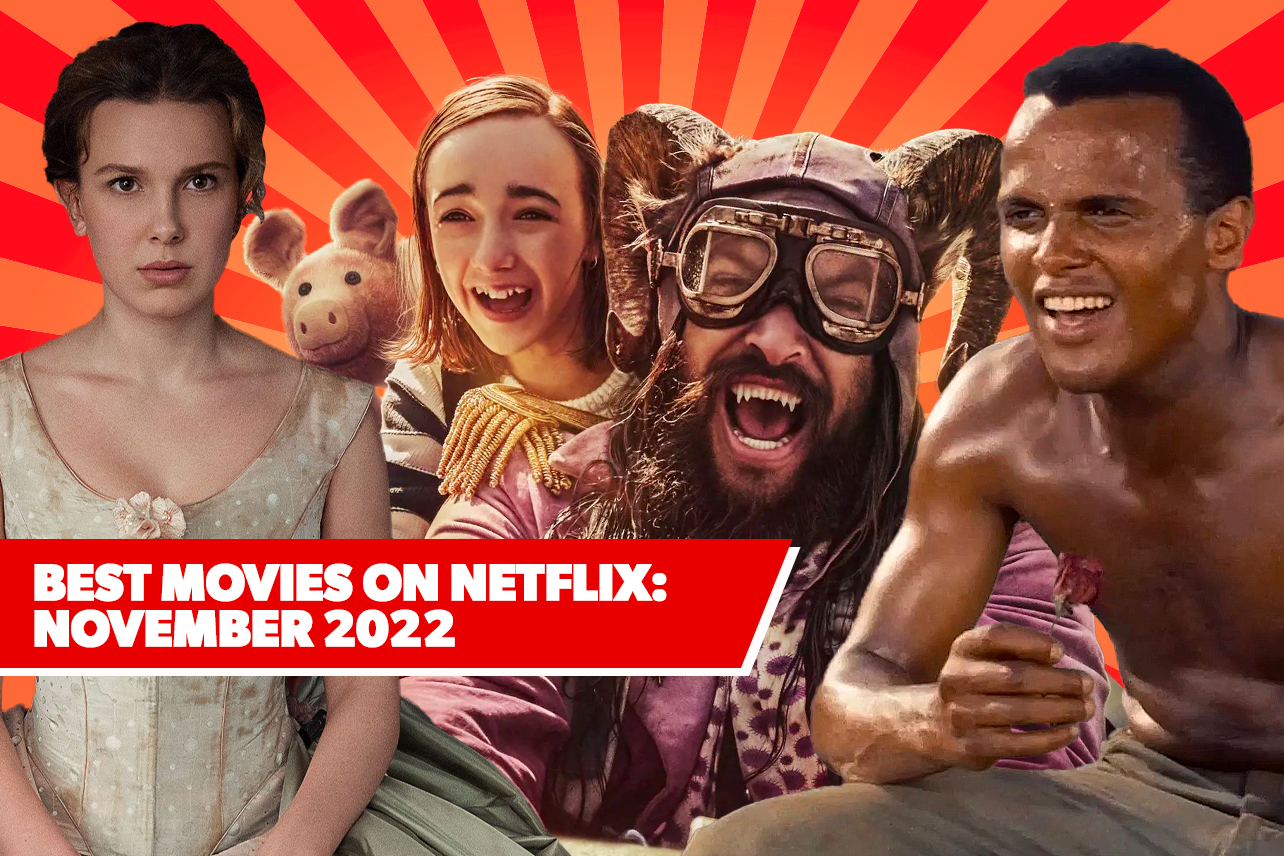 Netflix is serving up a feast of content with some downright delectable films and specials all November long to carry us through Thanksgiving and beyond. This month, Netflix is welcoming in a whole array of terrific titles that will do everything from take your breath away with immersive action and drama to woo you with soft moments and charming comedy, and more. Whether you’re looking for something intense, informative, or romantic, Netflix has got you covered with plenty to feel thankful for. Keep reading for the streamer’s best new movies coming this November.

Moving further into the month, the platform is debuting even more original titles to beef up their already-stacked catalog of hits. Mid-November releases like The Wonder and The Swimmers in particular are highly-anticipated releases featuring everyone from big-name stars to fresh faces putting out powerful performances that culminate in stand-out films destined for the Netflix Top 10.

And we know December is still a little while away, but if you’re looking for Netflix Originals to already get you in the holiday spirit a bit early, be sure to check out holly jolly titles like The Noel Diary, and Christmas With You, and Lindsay Lohan and Chord Overstreet-led rom-com Falling for Christmas which all premiere on the platform throughout the month.

Want to know what other eye-grabbing movies are dropping on Netflix in the next month? Keeping scrolling to check out our full list of what movies to watch on Netflix in November.

This highly-anticipated sequel to 2020 Netflix Original mystery film Enola Holmes brings us back into the world of youngest sibling of Sherlock (Henry Cavill) and Mycroft (Sam Claflin) Holmes, Enola (Millie Bobby Brown), who has officially begun a career as a detective for hire. But being a female sleuth in a patriarchal society isn’t easy, as Enola struggles to find clients willing to rely on a young girl to solve their mysteries. But when a case finally does come her way, Enola is challenged like never before as she’s forced to navigate dangerous and exhilarating parts of London in order to help a penniless matchstick girl find her missing sister, forcing to seek help from friends and… her brother, Sherlock.

The Wonder is a Netflix Original period drama that follows nurse Lib Wright (Florence Pugh) is set from England to a remote village in 1862 Ireland in order to observe a young girl who has not eaten for months. Lib attempts to get to the bottom of how her patient has miraculously survived without sustenance for this long, all the while being haunted by demons of her own.  In addition to Pugh, The Wonder features Tom Burke, Kíla Lord Cassidy, Elaine Cassidy, Caolán Byrne, Niamh Algar, Toby Jones, and more, so be sure to check out their work in this captivating film this month, only on Netflix.

Stream The Wonder on Netflix

Sierra Belmont (Lindsay Lohan) is a young and newly-engaged heiress who has an unfortunate skiing accident that leaves her with memory loss and lands her in the care of down-on-his-luck widower Jake (Chord Overstreet) and his daughter Avy (Olivia Perez) in the days leading up to Christmas. Sierra tries her best to regain her memory while spending the holidays in an unknown place surrounded by strangers. Will the influence of handsome cabin owner Jake and his family and friends be enough to help the spoiled amnesiac to regain her memory, or could their influences lead to something even more magical (love, of course)? Find out by streaming this Netflix Original holiday romantic-comedy as soon as it drops.

Stream Falling for Christmas on Netflix

The Swimmers is a moving biological drama film about Yusra Mardini (Nathalie Issa), a Syrian young woman and talented swimmer who flee Syria with her sister, Sara (Manal Issa), in 2015. But their escape to Germany is swiftly further complicated when a dinghy smuggling them and 18 other migrants from Turkey to Greece sees its motor stop working, leading the sisters to take on the responsibility of dragging the boat and its many passengers across the Aegean Sea. This is the inspiring true story of two sisters’ journey from danger to heroism and eventually, even the 2016 Rio Olympics.

Stream The Swimmers on Netflix

Led by culture critic and historian Elvis Mitchell, this Netflix Original documentary tracks the evolution and revolution of Black cinema. Mitchell takes viewers from Black cinematic history, beginning with its origins and tracing it to the present, with a particular focus on the impactful and groundbreaking films of the 1970s. Featuring archival footage and exclusive interviews with this movement’s key figures like Samuel L. Jackson, Billy Dee Williams, Whoopi Goldberg, Laurence Fishburne, Harry Belafonte, Margaret Avery, and more, Is That Black Enough for You?!? is a must-watch for all lovers of film, history, and American pop culture.

Stream Is That Black Enough for You?!? on Netflix

The Noel Diary is a Netflix Original romantic comedy-drama about a novelist named Jason (Justin Hartley) who returns to his childhood home on Christmas in order to settle his estranged mother’s estate. But when his efforts lead to the discovery of an old diary, he gets the chance to not only learn more about his own past, but also to help Rachel (Barrett Doss), a woman who has come to town looking for her birth mother. Will their search for the diary’s author, the titular Noel, lead the way to answers and love?

Stream The Noel Diary on Netflix

Filmed in Toronto at the Scotiabank Arena, Netflix’s latest big stand-up comedy special is Trevor Noah: I Wish You Would. In it, the Emmy and Grammy nominated comedian dishes on everything from his revelations about learning the German language, to speaking ill of the dead, to his passion for curry. Get in on all of the hilarity and brilliance by streaming this entertaining new hour of comedy from Trevor Noah this month, only on Netflix.

Stream Trevor Noah: I Wish You Would on Netflix

This Netflix Original holiday rom-com centers on Angelina (Aimee Garcia), a pop star who is feeling burnt out and therefore decides to go looking for inspiration in order to craft a holiday hit to lift her out of this rut. Angelina’s search for songwriting material leads her to travel to a small town in New York in order to grant a young fan’s Christmas wish. In doing so, she hopes to revitalize her career, all while helping out her fan and maybe even finding some unexpected romance along the way. In addition to Garcia, Freddie Prinze Jr. stars in this melodious movie that’s sure to get you into the holiday spirit.

Stream Christmas With You on Netflix

Stutz is a Netflix Original documentary that offers an intimate and honest look at actor Jonah Hill and his therapist, leading psychiatrist Phil Stutz, as they hold candid conversations about Hill’s mental health in relation to the stresses and demands of the fast-paced film industry. Beyond that, the two also delve into the titular Stutz’s own background, discussing his formative early life experiences, in addition to his current job and the unique, visual mode of therapy he employs with clients that has helped to change lives, like it has with Hill. Take a fascinating peek behind the curtain at both a big-time therapist and his well-known patient in Stutz on Netflix.

If you’re looking for fun for the whole family this Thanksgiving season, look no further than family adventure-comedy Slumberland. This whimsical and heartfelt Netflix Original film follows Nema (Marlow Barkley), a daring young orphan who embarks on an epic journey to the dream world of Slumberland after discovering a secret map to the aforementioned land of dreams. With the help of larger-than-life outlaw Flip (Jason Momoa), she steps through dreams and nightmares in order to find a precious pearl that will grant her biggest wish: to see her late father (Kyle Chandler) again.

This French-language action crime-thriller is the sequel to 2020’s Lost Bullet and picks up where the first film left off in the aftermath of Charras’s (Ramzy Bedia) death. And now that Lino (Alban Lenoir) has cleared his name, the genius mechanic has teamed up with Julia (Stéfi Celma) to make up a new narcotic unit and is using his new post to help him find and get revenge on the corrupt cops who murdered his brother and mentor. Follow Lino’s unrelenting quest for vengeance and justice in this high-octane Netflix Original film.