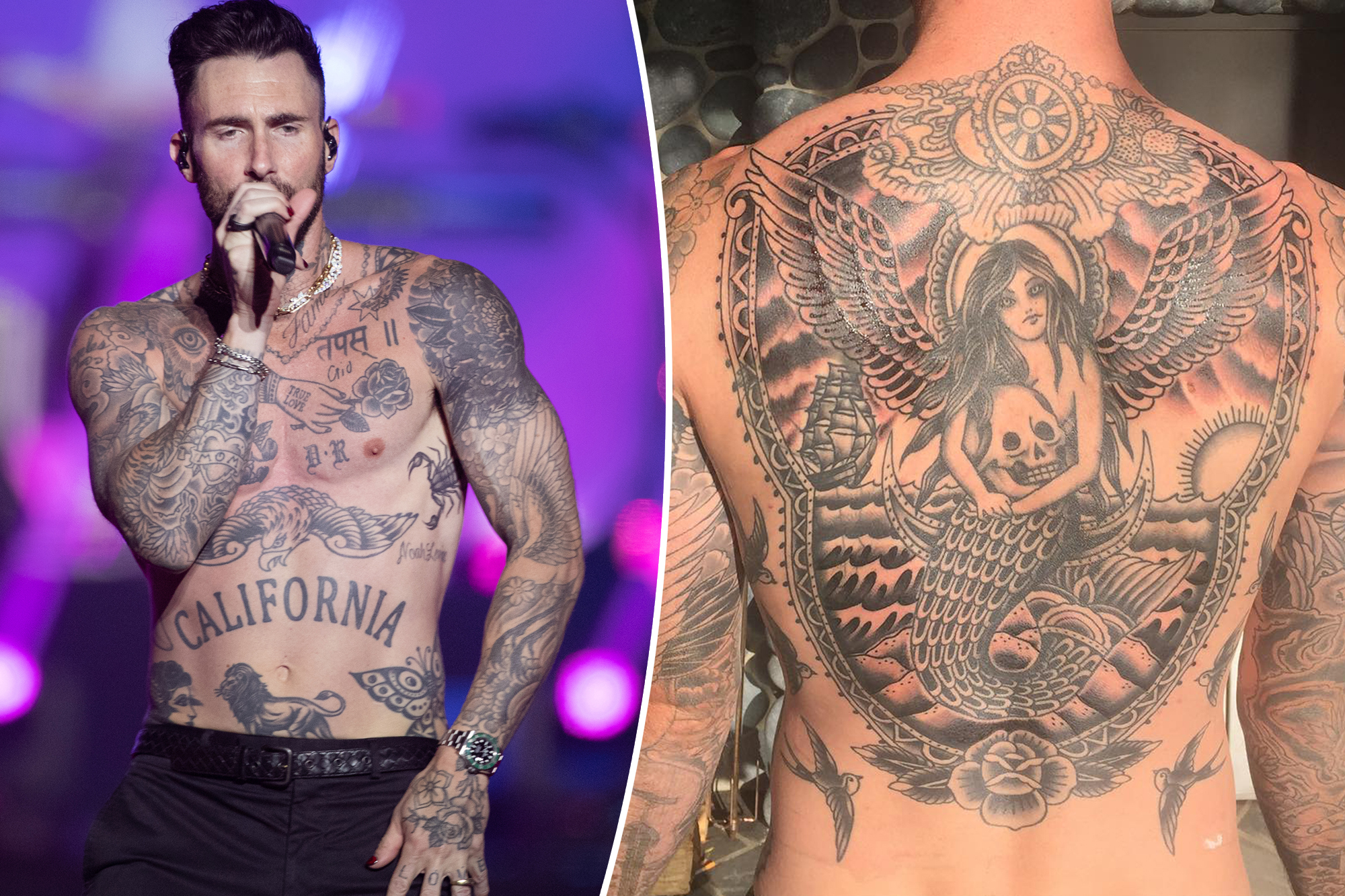 The Maroon 5 frontman is covered from head to toe in tattoos, with designs that honor his California roots, his family and his loves of music and Asian artwork.

Levine also has more than one tattoo tribute to wife Behati Prinsloo, on whom he was recently accused of cheating.

“Tattoos wind up being this strange road map or narrative over the years. They always remind me of this long, weird, awesome journey life has been,” he told People in 2013.

While Levine went viral after his 2019 Super Bowl halftime performance — during which he shed his shirt and put his extensive collection of body art on display — he continues to spark interest in his ink whenever he shows it off.

Below, learn more about some of the star’s most noteworthy tattoos and their meanings.

Behati Prinsloo posted a photo of her husband with his Calirosa tequila — and a new rose face tattoo.Instagram

There may be one place Levine is unwilling to get inked: his face. The rocker caused an uproar in December 2021 when he revealed a rose tattooed near his eye. However, it turned out to just be a temporary design to promote Calirosa Tequila, the spirit brand he runs with Prinsloo.

“This message is for my mother: I do not have a tattoo on my face,” Levine clarified in an Instagram Story shortly after showing off the artwork. “I’m too f—kin’ vain to get a tattoo on my face. I’ll tattoo the rest of this, but no, the face has gotta stay the same.”

Go big or go home: In March 2021, Levine had his entire left leg inked with black-and-white Japanese-style waves, a process that took artist Nathan Kostechko three days to complete. He called the experience “ouch but worth it” on social media at the time.

Clearly, the pain didn’t scare him away from getting his other leg tattooed to match; in August 2021, artist Bill Canales spent 13 hours inking waves that spanned from Levine’s right hip to his ankle, calling the star “a true warrior to say the least.”

Done in 2016 by Bryan Randolph, Levine’s massive back piece took six months to complete and features a siren — a half-human, half-bird mythological creature with a bewitching voice used to lure sailors to their doom via song. Levine’s is seen cradling a skull in her arms as a ship approaches.

Levine’s a Cali boy through and through, even inking the name of his home state across his stomach. He also has “Los Angeles,” where he was actually born and raised, on his upper bicep.

“This was inspired by my love of this amazing book of Tibetan drawings,” he told People of the traditional-style tiger at his elbow.

The singer’s been getting inked since 2001, when he added a dove on his left bicep. “I was 21. It was five days after 9/11. I felt this needed to say something with this peaceful thing on my body,” he told People in 2013.

Levine showed off his love for Prinsloo in literally cheeky fashion in 2017, posting a photo of himself grabbing her butt — and showing off his fresh finger tats.

“it’s worth holding onto,” he captioned the shot.

Butterfly in a web

In 2021, the former “Voice” judge added a butterfly trapped in a web right on top of his throat — above the word “family,” which he has on his collarbone.

Perhaps it goes without saying that the star’s love of music inspired this particular tat.

Before Travis Barker and Kourtney Kardashian took over the “True Romance” obsession, Levine and Prinsloo got matching “you’re so cool” tattoos, a nod to the Hans Zimmer track from the 1993 film.

Who Is Glenda Cleveland, Niecy Nash’s Character on ‘Dahmer’? Was She a Real Person?