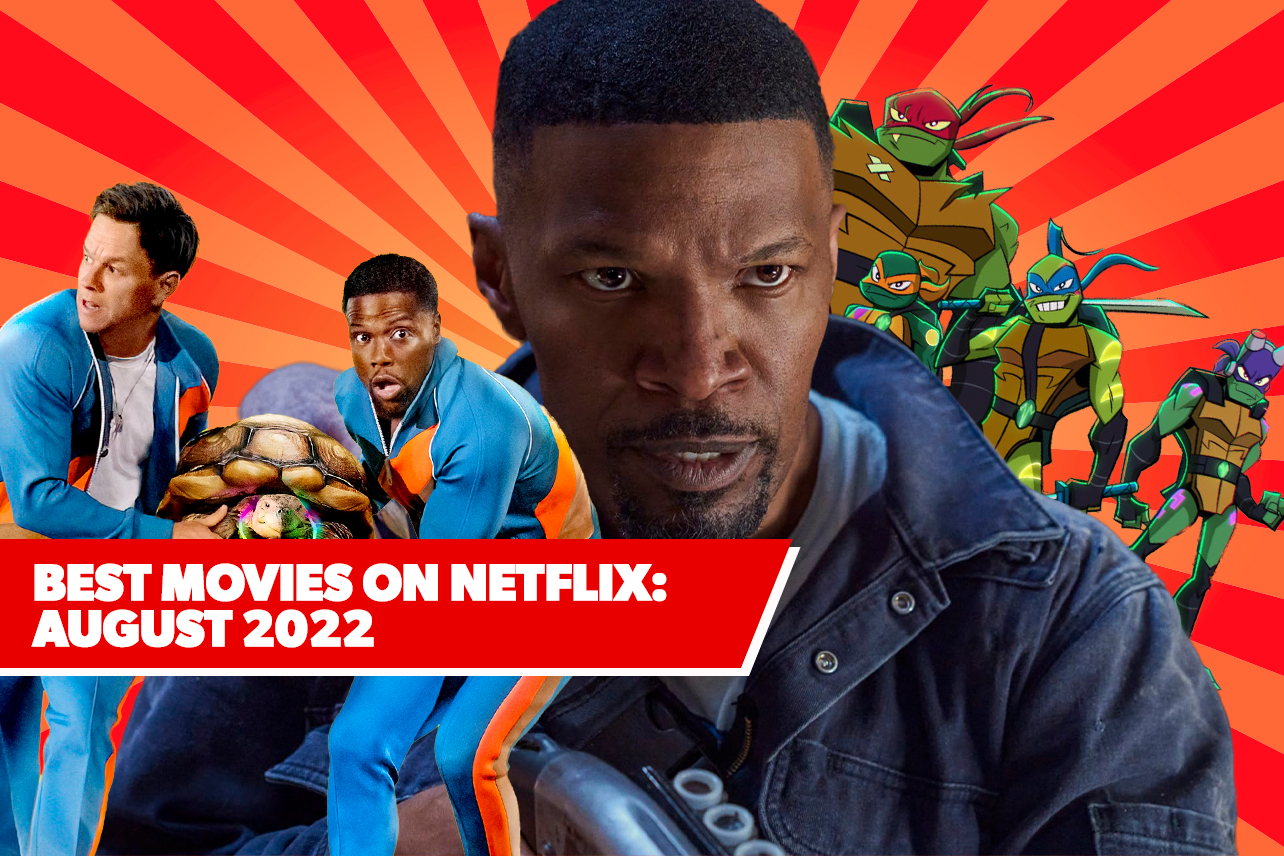 Netflix is coming in hot with some seriously superb films and specials throughout August to finish your summer streaming off strong. This month, Netflix is welcoming in a whole array of terrific titles that will do everything from delight you with laugh-out-loud hilarity to raise your pulse with their invigorating and immerse action, and more. Whether you’re looking for something relaxing, great for a date, or new from overseas, Netflix has got you covered. Keep reading for the streamer’s best new movies coming this August.

Moving further into the month, the platform is debuting even more original titles to beef up their already-stacked catalog of hits. Mid-August releases like Day Shift and Look Both Ways in particular are highly-anticipated releases with star-studded casts and unique plots that are sure to make them stand-out films destined for the Netflix Top 10.

If you’re looking for Netflix Originals with more of an international flare to make you feel like you’re taking a super summer vacation from the comforts of your couch, carve out some time for The UK’s I Came By, South Korea’s Carter, and Norway’s Royalteen, which all premiere on the platform at various points throughout the month.

Want to know what other eye-grabbing movies are dropping on Netflix in the next month? Keeping scrolling to check out our full list of what movies to watch on Netflix in August.

Our protagonist in this R-rated fantasy action-comedy film is a hard-working blue-collar father Bud Jablonski (Jamie Foxx) who is willing to do anything to give his quick-witted 8 year-old daughter a good and happy life, even if that means straining his relationship with both her and his wife (Meagan Good). Though he outwardly portrays himself as a boring California pool-cleaner, Bud is actually in the intense and (un)deadly business of hunting vampires. Foxx, Dave Franco, and Snoop Dogg are among the talented cast of this thrilling new Netflix Original film that is sure to take the platform by storm this August.

On the night of her college graduation, Natalie’s (Lili Reinhart) life diverges into parallel realities after she takes a pregnancy test: one where she becomes pregnant and remains in her hometown, and another where the test turns up negative and then she begins her post-grad life in Los Angeles. In both journeys, Natalie gets the chance to experience life-altering relationships, pursue her dream job as an artist, and find out who she really is. In addition to Reinhart, this Netflix Original romantic comedy-drama also stars features Ramirez, David Corenswet, Aisha Dee, Andrea Savage, Luke Wilson, and Nia Long.

Stream Look Both Ways on Netflix

This Netflix Original thriller follows a young graffiti artist (George MacKay) who targets homes of the elite as he uncovers a twisted and shocking secret in the hidden basement of a prestigious judge (Hugh Bonneville), thereby triggering a chain of events that put himself and his loved ones in danger. Kelly Macdonald, Varada Sethu, Percelle Ascott, and Antonio Aakeel also star in the chilling drama thriller film streaming exclusively from Netflix at the end of August.

Me Time is an R-rated comedy film that follows a stay-at-home dad (Kevin Hart) who finds himself with some sweet, sweet “me time” for the first time in years while his wife and kids are away. His decision to reconnect with his former best friend (Mark Wahlberg) ends up serving as the catalyst for a wild weekend so insane that it threatens to complete upends his life. Take some “me time” for yourself by checking out this outrageous Netflix Original to end your August streaming on a hilarious high.

Stream Me Time on Netflix

In this sequel to the first live-action feature film based on the beloved Fullmetal Alchemist anime series, the Elric brothers (Ryôsuke Yamada and Atom Mizuishi) meet their most challenging opponent yet in the form of a serial killer (Mackenyu) with a large scar on his forehead. When the killer (accurately dubbed Scar) begins targeting State Alchemists for their sins against God, Alchemist Edward finds himself at risk. In addition to the threat of Scar, the brothers are also shaken by the return of the homunculi. With so many fearsome foes to face and hurdles to overcome, this Netflix Original fantasy action-adventure is sure to keep you on the edge of your seat from start to finish.

Stream on Fullmetal Alchemist the Revenge of Scar Netflix

Asha (Pallavi Sharda) has just left a successful big city banking career behind, broken off her engagement, and moved to New Jersey, and she’s never felt better. The same can’t be said about her mother, who fears that her daughter is missing out on her shot at a happy life by pouring all her focus onto her new startup, and so she devises a plan to help find Asha a significant other. After secretly creating an online dating profile for Asha, she sets her daughter up with Ravi (Suraj Sharma), whose parents have done the same thing for him. Frustrated by their parents breathing down their necks, Asha and Ravi make a deal to fake date in order to both get their relatives off their backs and get through the upcoming wedding seasons. Things start to get complicated, however, when the lines between fake and real blur, leading to complicated feelings, plenty of drama, and the ideal rom-com to cap your summer streaming.

This ambitious Korean-language action thriller film begins two months into a deadly pandemic whose origins lay in the Korean Demilitarized Zone, and has since gone on to ravage both the United States and North Korea. It’s then that a man (Joo Won) awakens with no memories or knowledge of who he is, only a mission and the additional instruction that he shall be known as Carter. His orders come from a strange voice in his ears, a voice that tells him that he must rescue a girl being held hostage because within her is the only antidote to the deadly virus. Failing the mission means certain death, but going through with it also means confronting perilous danger at ever turn.

Stay on Board: The Leo Baker Story is an enthralling and honest documentary that revolves around the life and career of competitive skateboarding icon Leo Baker as he builds up to taking his board and incredible tricks to the 2020 Tokyo Olympics. As the stakes get higher and his fame grows, the film captures Leo as he’s forced to grapple with how the world views him and who he knows himself to be, all whilst handling the immense pressure of expectations, both of others and himself. When both his life and career hit a major turning point, Leo must balance the influences and competing factors of society, sports, skate culture, sexuality, and identity in order to stay on board.

Stream Stay on Board: The Leo Baker Story on Netflix

When Lena (Ines Høysæter Asserson) and prince Karl Johan (Mathias Storhøi) begin to get feelings for one another, Lena is charmed yet skeptical of the partying prince whose face is a common feature in many a tabloid and gossip blog. To make matters even more complicated, Lena was running one of those blogs until someone exposed her identity. But that’s not the only thing that the teen is hiding, and she’s desperate to keep her biggest secret about why she left her hometown, though her newfound connection to this future king puts her in a vulnerable position that may leave her hidden past unearthed and reputation ruined. Royalteen is a Norwegian-made Netflix Original film about falling in love, conquering fears, and accepting who you really are, mistakes and all.

Your favorite weapon-wielding reptiles are back in an all-new Netflix Original animated movie that’s jam-packed with epic action and butt-kicking adventure. Raphael, Michelangelo, Leonardo and Donatello are up to their usual teenage turtle antics in this comedic quest that raises the stakes higher than ever, as the they’re put to the test when a mysterious stranger named Casey Jones arrives from the future to warn the brothers of an impending Krang alien invasion. It’s up to the Turtles and their mystic ninja powers to stop these ruthless creatures from unleashing chaos and destroying the world, while simultaneously making sure that the terrors and frustrations of teendom don’t bring them down first.

Stream Rise of the Teenage Mutant Ninja Turtles: The Movie on Netflix

13: The Musical is a Netflix Original coming-of-age comedy musical that originally debuted live on Broadway in 2008 and will soon be available for all to enjoy on the platform. The film chronicles the familiar ups and downs of preteen life through the lens of 12-year-old Evan Goldman (Eli Golden), who has been uprooted from his lifelong home in New York City to live with his mother following his parents’ divorce. While Evan is initially crushed to be leaving his friends, father (Peter Hermann), and rabbi (Josh Peck) behind, his move to the small town of Walkerton, Indiana eventually sparks the idea to make new friends by turning his impending Bar Mitzvah into the best and coolest party ever. Of course, it’s eighth grade, so naturally between hormones, anxieties, and navigating intricate social circles, there’s plenty that can go wrong. Maybe turning 13 isn’t all that it’s cracked up to be…

Stream 13: The Musical on Netflix