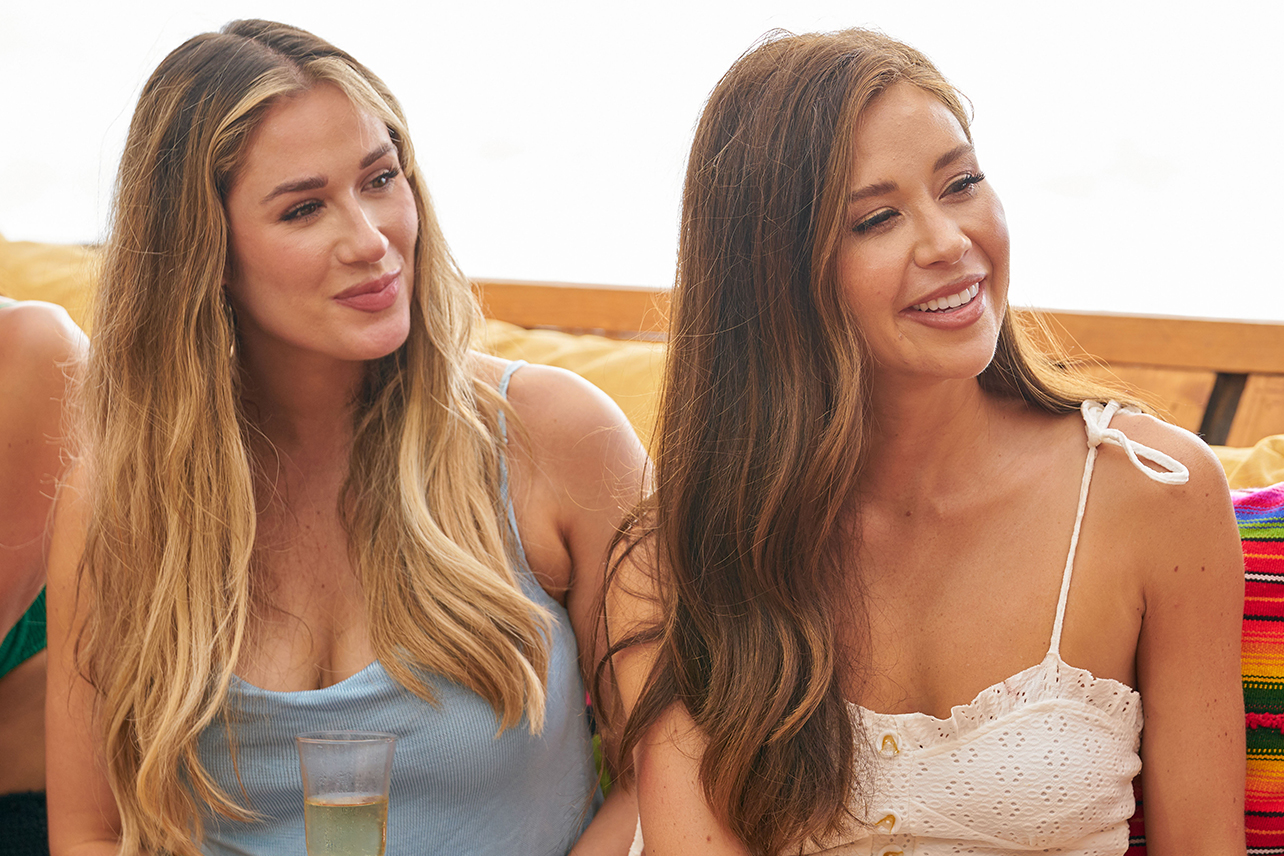 Warning: Spoilers for Bachelor in Paradise Season 8, Episode 13 ahead.

As Season 8 of Bachelor in Paradise draws to a close, the pressure is on. Relationships are being put to the test, people are leaving the beach left and right, and every single contestant is picturing what they want life outside the beach to look like.

In Season 8, Episode 14, we saw four iconic Bachelor Nation alum visit the beach, we watched some tough conversations go down, witnessed the first annual Paradise Sadie Hawkins Dance, and much more. Once again, Paradise‘s worst couple (Genevieve and Aaron) got into another ridiculous fight, and three (!!!) people unexpectedly self-eliminated before the episode’s end.

The finale is next week, so it makes sense that no new cast members arrived during Episode 14. But contestants still welcomed several guests to the beach.

First up, former Bachelorette leads Gabby Windey and Rachel Recchia, who visited Paradise to give the girls some advice and give the guys (especially ex-boyfriends Johnny, Tyler, and Logan) a little scare. In spilling the tea, Rachel revealed she doesn’t think anyone deserves to find love more than Tyler, who’s so ready for an engagement. And both Rachel and Gabby had a few choice words to say about Logan. “He was our only flip-flopper. He was our only problem,” Rachel said. “I don’t respect Logan.” Logan’s Paradise gal Kate pulled Gabby and Rachel aside and the three got real, leaving Kate unsure of her relationship. Before the dynamic duo left, Gabby warned Logan, “I have beef. Treat my girl well.”

“Bachelor Nation Royalty,” Becca Kufrin and Thomas Jacobs, descended the Paradise stairs next to reassure contestants that the Paradise process can work. For those who don’t know, after getting engaged to (and then dumped by) Arie Luyendyk Jr. on Season 22 of The Bachelor, Kufrin became The Bachelorette lead in Season 14 and got engaged to Garrett Yrigoyen. The two broke up in 2020, but Kufrin joined Bachelor in Paradise Season 7, met Thomas (The Bachelorette Season 17), and got engaged in May 2022 when Kufrin popped the question. In honor of their love story, the two returned to Paradise to throw the first annual Paradise Sadie Hawkins Dance.

Becca and Thomas encouraged the women of Paradise to get creative and ask the men to the dance, so here’s who went together.

Genevieve asked Aaron with help from a mariachi band
Brittany broke out a ball pit to ask Tyler
Serene asked Brandon with a buffet of ice cream and sweet treats
Victoria asked Johnny using a dreaded…checklist
Danielle asked Michael by…painting the word “Dance” on his head and shoving him in front of a mirror?
Shanae asked Joey
Florence asked Justin
Kate asked Logan after they had a talk about their relationship
Ency asked Andrew

The dance was 90s themed, and featured a caricature drawer, a fortune teller, a photo booth, and choreographed dance battles between the men and women. Michael and Danielle were crowned the dance’s king and queen, and all was going smoothly until Jessenia pulled Andrew aside to chat.

Jessenia brought up the fact that Andrew dated Teddi, Brittany, herself, and Ency in Paradise. She accused him of skirting by and connecting with too many new people. And he said he was hopeful for love with each woman he dated, and almost went home before meeting Ency.

Ency interrupted their conversation and asked Andrew to leave with her. He said he needed to finish the chat with Jessenia, and finally admitted, “My heart is somewhere else. My heart is still with someone else: Teddi. I have nothing here and I tried…I’m going home. I can’t move on until I get clarity. I don’t have it.”

Andrew then talked to Ency and explained he liked her, but his heart was somewhere else, so couldn’t stay in Paradise. She begged him not to leave, which brings us to…

Who went home on Bachelor in Paradise Season 8, Episode 14?

Three (almost four!) people self-eliminated in Episode 14, and they all left back to back. After confronting Andrew and hearing he never got over his relationship with Teddi, Jessenia left Paradise. After the difficult conversations with Jessenia and Ency, Andrew also left Paradise. And after begging Andrew to stay and watching him leave, Ency headed home as well.

After Genevieve and Aaron started screaming at each while debating the difference between pain and itching, Gen stormed off and told cameras, “I cannot see a life outside with him. I would not be happy.” She packed her bags again and said, “The last straw. I’m done. I want to go. Please get me a car.” Before she hopped in a van, Aaron asked her to talk. He once again defended his belief that “It is scientifically proven itching is low-level pain,” and apologized for his behavior.

As the great Wells Adams said, “I feel like this place is making me dumber.”

Who Went On a Date in Bachelor in Paradise Season 8, Episode 14?

Though there were a number of fights in Episode 14, there was also a super romantic date between Tyler and Brittany. They went to dinner, where Tyler said there was no one else he’d rather be with and he feels something special for Brittany. The two talked about his feelings for Rachel, then revealed they each see a future together outside of Paradise. Swoon!

Who Ends Up Together in Bachelor in Paradise Season 8, Episode 14?

By the end of Episode 14, the fate of several couples is up in the air. At the end of Week 8, here’s the status of the strongest couples on the show: