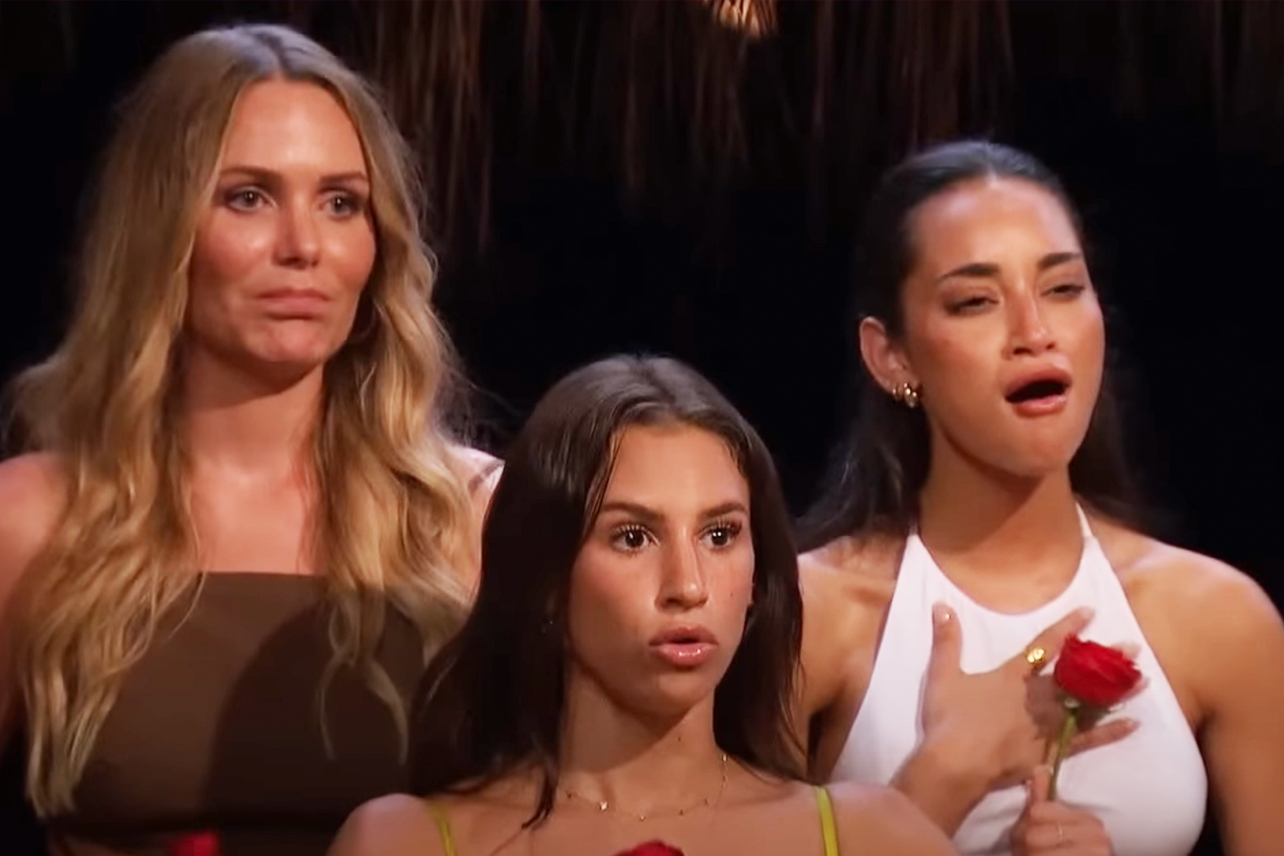 Warning: Spoilers for Bachelor in Paradise Season 8, Episode 15 ahead.

Bachelor in Paradise finale week has finally arrived, and as Season 8 comes to a close, couples are breaking up, heading home, and deciding whether or not their love is worthy of a Fantasy Suite.

Season 8, Episode 15 shows a recap of the chaotic journey thus far, along with the final rose ceremony of Paradise, a series of emotional goodbyes, a few last-minute arguments, and several couples taking incredibly hopeful next steps. In Part 1 of the two-part Bachelor in Paradise finale, we see which couples head to Fantasy Suites, and though we’ll have to wait until the next episode to learn how the off-camera overnights went, if anyone gets engaged, or if Jesse Palmer officiates a spontaneous wedding, the penultimate episode gives viewers a lot of closure.

Ahead of the final rose ceremony of the season, nearly everyone on the beach was paired off except for Mara. So before the roses started flying, she self-eliminated from the show and said her goodbyes. Host Jesse Palmer returned for the first time in ages to do what he does best, deliver bad news. He told the remaining contestants that the final cocktail ceremony, which many were hoping to use to have huge life-defining chats with their partners, was canceled. Instead, everyone would go straight to the rose ceremony, where he encouraged contestants to only give or accept a rose if they were happy and ready to take their relationships to the next level.

The men had the roses this ceremony, and with eight men and eight women, it seemed like everyone might end up happy at the end of the night. But this is Paradise, so of course there had to be some drama. Here’s the rose ceremony recap:

In Paradise’s very own Love is Blind moment, Kate channeled her inner Zenab and delivered quite the speech to let Logan down. “We have had some unforgettable moments on the beach. But you also told me that I was critical, looked down on you, [was] not warm enough, and stimulated by the trauma when in reality, those are projections that I feel from you. And when Jesse told us earlier to ask ourselves if we were happy or in love, the answer to those questions for me is no. I know what I want, and this isn’t it. So Logan, no. I will not accept this rose,” she said. Before she left, she turned to her fellow contestants and said, “I love you guys so much. I’ll see you on the other side.” After a round of hugs, a shocked Logan did the same.

Photo: ABC
Which Couples Broke Up And Who Went Home in Bachelor in Paradise Episode 15?

Jesse Palmer returned to tell the six remaining couples that Paradise was over, so they had to start having serious conversations and figure out if they could see a life together outside of the beach ahead of Fantasy Suites. Essentially, Fantasy Suites are only for couples working towards an engagement at the end of the show, so the options were as follows:

In addition to Mara and Kate/Logan, here’s who called it quits and headed home in Part 1 of the Bachelor in Paradise finale.

Joey and Shanae: Joey clearly wanted to continue the relationship outside of Paradise, but the feelings weren’t mutual for Shanae. She said the the age gap (he’s 24, she’s 30) scared her, as did the fact that Joey lives with his parents. “I feel like I’m your fun cool aunt and not your girlfriend,” she said, before adding that she wasn’t looking for “a social media freak” and “TikToks all over the place.” Shanae said she wanted “a man” and left Joey behind, despite him arguing he was a man who doesn’t make TikToks.

Justin and Florence: Twin #2 and Flo’s breakup went a lot smoother. After a simple, “At the moment I think we shouldn’t pursue things outside of Paradise,” followed by an “I agree!” the two hugged and parted ways.

Genevieve and Aaron: The thought of writing this particular recap blurb is so itchy and painful to me that I made a cup of hot chocolate as a treat before diving into it. OK! Buckle up. Here’s what went down with Season 8’s most melodramatic couple. Ahead of their chat, a very self-aware Genevieve told cameras, “Oh my god, I’m gonna need so much therapy after this it’s not even funny.” (Same!) She sat down with Aaron, who projectile word vomited a long speech about how he fell in love with Genevieve, wouldn’t do anything different, and knows they’ve had their ups and downs. He explained his main issue is that whenever there’s been an issue with them, Jen has tried to leave. “I need someone who can give me security…I need someone who’s going to stick around,” he said. “For that reason, I don’t think I can continue a relationship with you outside of Paradise.”

As Aaron droned on, Genevieve simply stared at him in silence. The quieter she was, the more he kept talking. “As much as I wish this could work, I’m at peace knowing that it didn’t,” he continued. “You’re a great friend. I wish you the very best. You look beautiful today.” Still nothing from Genevieve. The two went their separate ways, but as Genevieve packed AGAIN, she realized that Aaron tried to put all the blame on her. She marched back over and tried to hold him accountable for his problematic behavior throughout the season. The two finally headed home (for real this time), and Gen gave one of the best car confessionals in Bachelor Nation history. “There are so many things I overlooked because I wanted it to work. It makes my brain itch. It doesn’t pain me but…” she said, referencing one of their ridiculous Paradise fights. “I just wasted my time on a child, and that’s Big Facts,” she closed with, citing one of Aaron’s signature phrases.

Who Left Paradise Together in Part 1 of Bachelor in Paradise‘s Season 8 Finale?

Joey and Justin: These boys may have said goodbye to their Paradise crushes, but at least they have each other. They hopped in the same ride and headed home for Sunday sauce with mom.

Michael and Danielle: “Paradise mom and dad” both knew it was too soon to get engaged, but they had one of the most heartfelt talks in Paradise history and decided to leave together, too. Danielle told Michael she feels so lucky to have met him. They both cried. And Michael opened up about his late wife, Laura. He showed Danielle something he keeps in his pocket all the times: a compass he had made for him, James, and Laura about a month before she died. “I bring it with me everywhere so I don’t get lost, and on the inside it says, ‘I find you wherever you are,’” he explained. “I can’t help but think that this compass brought me to you. In some crazy way, in some crazy place.” More tears! The two chatted about their desire to introduce Danielle to Michael’s son James when the time is right, and Michael told Danielle she would have his late wife’s approval. “She would love you. I know that for certain. She’d be happy it was you. So am I,” he said. We’re crying, it’s fine!

Who Headed to Fantasy Suites in Part 1 of Bachelor in Paradise‘s Season 8 Finale?

Jesse Palmer finally delivered some good news on this show and told the two final Paradise couples — Brandon and Serene and Johnny and Victoria — that they could spend the night relaxing and enjoying a special dinner together. We finally saw contestants eat on camera (!), they shared their favorite Paradise memories, and swatted some killer moths before leaving the beach and heading to a hotel for special overnight dates. Here’s how the episode played out for each remaining couple.

Brandon and Serene: Obviously they’re still on track to leave Paradise together, and I truly think if they could have skipped Fantasy Suites and jumped straight to the engagement they would have. Brandon and Serene had a number of positive, transparent chats on the beach and ahead of Fantasy Suites, so in the words of Brandon, hopefully he’ll put a ring on it.

Victoria and Johnny: It’s clear these two love each other and can see a life together outside of Paradise. The question is, will they leave the show engaged or not? They appeared to be on the same page on the beach, but when they chatted in their hotel room ahead of Fantasy Suite alone time, Victoria stressed that she was ready to get engaged and Johnny seemed deeply unsure if he was at that stage in life yet. They opened up about their biggest fears, and Johnny revealed he still has a lot of issues to work through as a result of past relationships. When we left them, Johnny said he still needed time to reflect and Victoria told camera’s it would be “heartbreaking” if he didn’t want to propose to her. They accepted the Fantasy Suite offer, and Victoria said they needed to have a serious talk off camera.

Part 2 of the Bachelor in Paradise Season 8 finale airs on ABC Tuesday, November 22 at 8 p.m. ET.