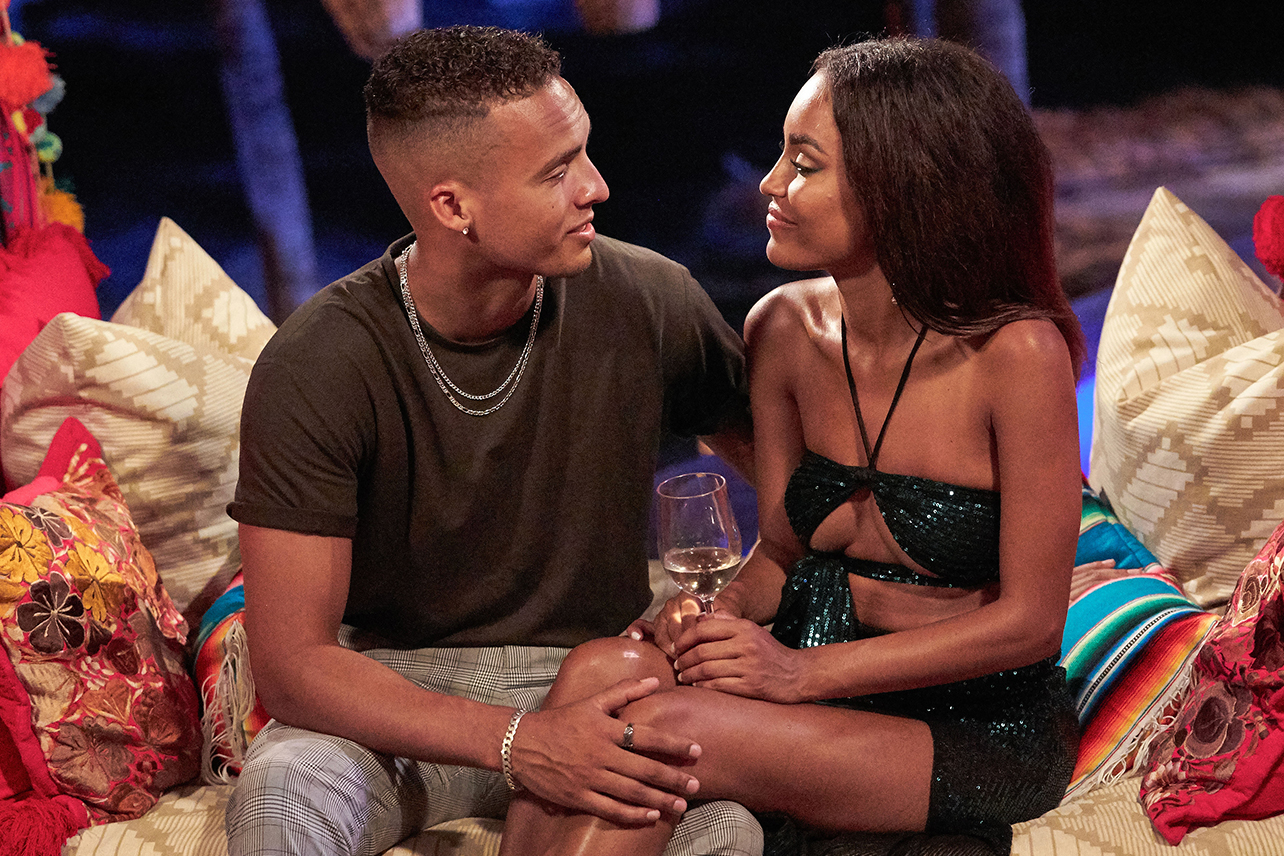 The moment Bachelor in Paradise fans have been waiting for has finally arrived. At long last, Season 8’s Split Week is over.

In Episode 9, the OG Paradise women returned to the beach to make up (or break up) with their men after a week apart. Hard truths were revealed, tears were shed, and the three men left at the hotel (Tyler, Adam, and Alex) made their way to the beach in hopes of finding love. (Bring back Rick and Olu too, cowards!)

Bachelor in Paradise Episode 9, Back to the Beach Recap: Which Couples Survived Split Week?

Jesse Palmer finally told the girls they could head back to the beach, but they didn’t all return at once. Genevieve, Shanae, and Jill headed back first. Brittany followed. Then Serene and Victoria returned. Here’s how each reunion went.

The first couple to reunite, Genevieve and Aaron, greeted each other with a giant hug. Genevieve explained that she spent the majority of the week in bed missing Aaron and crying. She said she didn’t give any of the men romantic attention and didn’t go on any dates or kiss anyone. Aaron told Gen that although several guys on the beach were tempted, he only thought about her all week. He explained that he made verbal commitments to her before she left and wasn’t willing to break them. Genevieve cried tears of joy and the two kissed and picked up right where they left off. “I’m sorry you went through so much stress…I was in the pool all day playing Sharks and Minnows and drinking beers,” Aaron laughed. Men.

When Shanae returned to the beach, Logan was lounging on a day bed with Kate. Shanae pulled him aside to catch up, and she revealed to Logan that although she went on a date with Tyler, she was still all-in with him. Logan explained he went on two dates, and though he had fun with Sarah, they didn’t work out. He admitted that after his second date with Kate, he felt she was someone he wanted to continue pursuing. Shanae was confused and said she felt their connection was solid when she left the beach. Logan tried to blame his new relationship on Shanae’s interest in James, and she wasn’t buying it. (We’ve moved on, sir!) He asks Shanae if he can give her a hug and she declines. Later in the episode, Shanae confronts Logan again and shares words with Kate who “talked shit” about her at Women Tell All. It’s clear there’s more left unsaid between these three, so I imagine we haven’t seen the last of this conflict.

Jill’s reunion with Jacob started with smiles and a hug and ended with tears and a goodbye. After Jill revealed she spent the week in bed and had no connections with the five new guys, Jacob said he made a connection with Kate, they kissed, and though it didn’t last, the fact that he found a stronger connection than the one he shared with Jill made him realize they should break up. Jill was upset, but also glad that she finally had clarity. However, she didn’t want to start over with someone new, so she left Paradise.

The chillest breakup of the episode was between Brittany and Andrew. After catching each other up, the two learned they were both the same page and wanted to explore other connections. Andrew wanted to date Jessenia, and Brittany wanted to date Tyler. The two parted was on good terms, with no ill will, a mutual understanding, and well wishes. Aww.

The greatest reunion of the episode was undoubtedly between Paradise’s golden couple, Serene and Brandon. After locking eyes on the beach, Serene and Brandon ran to each other and she jumped into his arms as he screamed, “YES BABY!” The two kissed, and it looked as if they might get engaged right then and there. Instead, Brandon looked into Serene’s eyes and said, “I love you, Serene Brook Russell. And that’s not gonna stop.” She said she loved him, too. And they confirmed they could see an engagement at the end of their journey.

Victoria and Johnny also shared a run and jump reunion moment, but their conversation wasn’t as positive as Serene and Brandon’s. Victoria explained that she initially shut down any romantic connections with the five new guys, but on her last night at the hotel she got a date card and asked Alex out. She said Alex checked a lot of her boxes (AKA was actually ready to get engaged, married, and have kids — unlike Johnny) and Johnny didn’t take it well. The two openly discussed Victoria’s concerns about Johnny, but largely left things between them up in the air. Before the episode ended, Alex arrived on the beach, so it’s clear Victoria will have to have some tough conversations during the next episode.

Who Went Home in Bachelor in Paradise Season 8, Episode 9?

Jill was the only contestant who went home this episode. As a reminder, she self-eliminated after Jacob ended things with her.

Who Ends Up Together in Bachelor in Paradise Season 8, Episode 9?

Thanks to Episode 9’s reunions, there are several solid couples at the end of Week 5. Here are the strongest couples on the show right now: