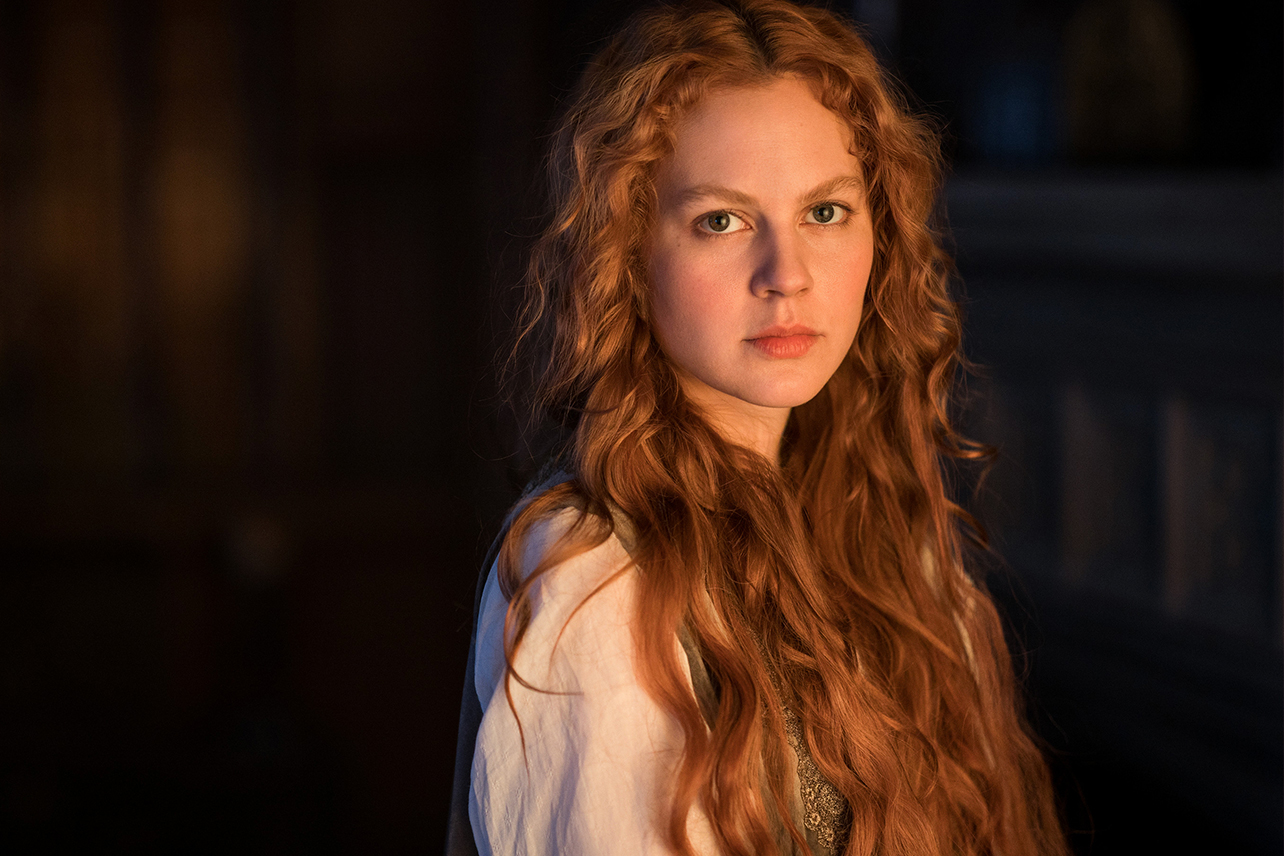 If there’s one thing Starz’s Becoming Elizabeth does really well, it’s nailing the visuals of the Tudor period. Katherine Parr (Jessica Raine) was a glamorous beauty, Mary Tudor (Romola Garai) a redhead like both her parents, and Elizabeth (Alicia von Rittberg) wore her mother’s Boleyn “B” necklace to court. In Becoming Elizabeth Episode 7 “To Laugh, To Lie, To Flatter, To Face,” the show dresses Elizabeth up in one of the young royal’s most iconic looks. She is dressed almost exactly as the real Elizabeth was in the  1546 portrait painted by William Scrots.

Becoming Elizabeth‘s Elizabeth is dressed up in this fine scarlet gown with jewel trim and gold petticoats not for a portrait, but to meet her potential husband. It’s a fascinating choice of costume for these scenes, as Elizabeth has donned her most rich and iconic look for two pivotal scenes that will reverberate over her entire life to come. Becoming Elizabeth is getting closer and closer to giving us the Elizabeth we are familiar with and I, for one, am happy about that.

Becoming Elizabeth Episode 7 takes place in the wake of Thomas Seymour’s (Tom Cullen) execution. Tensions between Catholics and Protestants are out of control and so the piously Protestant King Edward VI wants his sisters married to Protestant royals. For Catholic Mary, this is a sacrilege. For Elizabeth, it’s an unfortunate turn of events as now her bestie Robert Dudley (Jamie Blackley) is close to proclaiming his feelings for her.

Elizabeth dons her iconic look to meet Prince Frederich of Denmark at court, but Robert stops her on the way. He appeals to her emotions and begs her to run away with him. Elizabeth, who has now learned how men might use romance to control her, rejects him, pushing him away. Then, when she arrives in court, she’s horrified to discover that the Danes have rebuffed her thanks to a note a vindictive Mary sent full of gossip about Elizabeth. Elizabeth uses this moment to sob and rage and argue that she is not her mother.

What’s interesting is that this is the first time we’ve seen Elizabeth look like the Queen Elizabeth I of legend. She’s rejecting suitors and arguing her case to the court. Moreover, she is wearing “the dress.”

Weirdly, she probably wouldn’t have worn the same outfit from the portrait at this time because that painting was made while her father was still alive. She was a few years younger in that portrait than she is in Becoming Elizabeth. Nevertheless, this is what Elizabeth wears in her first known portrait, meaning this is where our minds always reach back to when we think of Elizabeth on the ascent. It may not be a totally historically accurate outfit, but it is metaphorically on point.

Jennifer Lopez celebrates 53rd birthday in Paris with Ben Affleck
This is what 33 years of marriage looks like ...