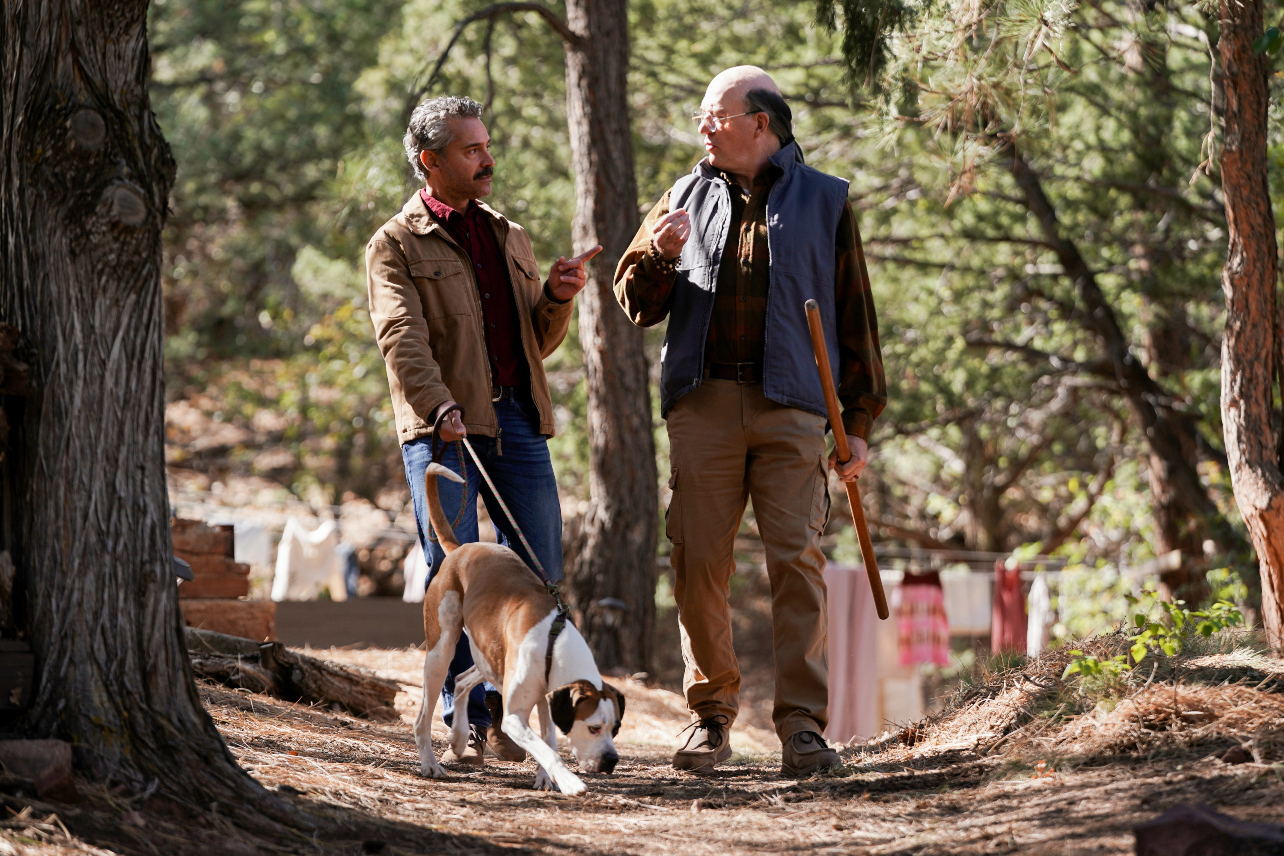 Last week on Big Sky, we discovered that Travis is indeed a double-crosser, but it’s Jenny, and not Dietrich, that he’s double-crossing. After a drunken night out Jenny and Cassie spotted Dietrich and his aides at a bar and followed them out into the parking lot. That’s where Travis, a cop who’s under cover in the local drug ring, and who Jenny thought was her ally, reveals to Dietrich that she’s a cop, too. When we pick up this week, Dietrich lets Jenny and Cassie go, and as she leaves Jenny gives Travis a hard stare-down that’s not very subtle, as if to say, “But we were sleeping together, how could you do this to me?”

Over at Cassie’s house, she finds a set of keys belonging to Max, her babysitter-slash-accidental-drug-trafficker, and the keys have a brass knuckle-style charm in the shape of a cat that she instantly recognizes from the scene of Harvey’s murder, because Harper dropped hers there. Max returns the keys to Cassie and asks about the charm. Max knows Cassie is onto something. But speaking of double-crossing, it turns out that Max’s mom, who she confided in about taking the drugs and money and being caught up in the cartel mess, didn’t keep that information to herself, and she told the worst person in the world she could have possibly told, her boyfriend T-Lock. T-Lock has been an unsettling presence for the entire season, and it’s worse now that he knows Max and her friends are harboring drugs. He promises to return the stash to the police anonymously if only she’ll tell him where they are. Max confers with her friends and they agree to give T-Lock the drugs, but they’ll keep the money.

Jenny meets with Travis to ask him why he sold her out as a cop, and he explains it was his only choice, he couldn’t afford to get made himself. He tells her in no uncertain terms that they can’t keep up their relationship and leaves, but little does he know, he’s being watched by another one of Dietrich’s lackeys named Smiley who realizes that Travis might not be who he says he is. Smiley texts Travis to inform him that he and Jenny are faking it. He then tells him. “You’re my bitch now.” Travis heads back up to his motel room, looking over his shoulder for Smiley the whole time, and when he enters his room, there’s a gun pointed at him, but the person on the other end is, surprisingly, not Smiley at all. It’s Donno.

We cut to Ren’s luxury rental house, where the gun is still fixed on Travis, and Ren, who thinks Travis is just Dietrich’s body man and doesn’t know he’s also a cop, interrogates him about where to find the drugs, while inviting him to join her Mean Girls club. Ren has trouble of her own though, see she’s in town to find the drugs to appease her father, who’s the BIG big boss of this whole operation, but she’s also got her brother chattering in her ear and threatening to take over her role. So she’s under some pressure to find the drugs and smooth things over for the sake of the family business. They torture Travis until he gives up Smiley as Dietrich’s main man. Ren applauds Travis’s betrayal, claiming he’d make a great mean girl himself.

We never figured Jenny for a self-pitying woman dependent on a man for happiness, but the whole Travis thing is getting to her, and she shows up to Cassie’s house in tears over the fact that Travis has cut her off. To drown her sorrows, she mixes a good portion of whiskey into a quart ice cream. Jenny also seems to not understand what it means to keep things on the down low though, because despite Travis breaking things off, and despite the fact that Dietrich and his whole gang know who she is now, she goes to Travis’s motel room yet again to see him, but the door is open and his gun is still there, and she realizes something bad has happened to him. But she assumes that it’s Dietrich, not Donno, that has taken him.

Before Jerrie left to go stay at her parents’, she left Lindor with a lead, the address of a man known for making “fetch” happen, Wolf Legarski. Lindor, fresh off of his kiss with Jerrie, has lunch with Cassie to discuss the lead, but that’s when Cassie drops a bomb on him that she wants to go on a date with him. Some timing, Cassie! If poor Jerrie ever returns to the show, she’s going to be heartbroken. Lindor follows the lead to Wolf’s place with his dog in tow, pretending to be a big fan of Wolf’s book. When he arrives, Wolf’s wife, Agatha, hides Ronald and Scarlet in a shed. After a few minutes of small talk, Wolf calls out Lindor and asks why he’s really there, asking, “This is about my brother, isn’t it?”Lindor reveals his identity as a U.S. citizen. Marshal and Wolf reveal their identities as U.S. citizens. That’s when Lindor notices Pergman’s favorite cereal, Cocoa Chunks, in the kitchen and knows Wolf is lying.

As we’ve mentioned, we always knew T-Lock was up to no good, but now we know how he connects to the whole story. He was once affiliated with Dietrich, or at least with Smiley, and he goes to Smiley to make him an offer: The two of them will sell the drugs he’s now in possession of and leave Dietrich and the cops out of it. At Smiley’s apartment, he’s sampling the goods when who busts in but Donno and Ren, and after a brief scuffle, Ren stabs him in the back. Ren’s convinced now that Dietrich has the rest of the drugs. and,

We call the last few minutes of an episode “the finale” “No one will leave well enough alone.” Jenny ONCE AGAIN returns to Travis’s motel room where she realizes he’s been tortured and injured, but this time he allows her entry and she ices him up real good. Travis tells her that Ren had him bound up, but he agreed to work with her. But while Jenny’s there, Dietrich bashes down the door and drags Travis to go see Smiley who, they don’t know it yet, is dead.

And Lindor, also unable to leave a bad situation alone, has second thoughts after leaving Wolf’s place, so he stops his car after feeling that something is amiss, and travels back to Wolf’s property on foot. He approaches the locked room where Ronald and Scarlet are being held and… cue end credits.

Stray bits
– Ren’s brother, Jag, takes being ghosted to a whole new level. Not content to have his sister ignore his calls, he tells his bodyguard that they’re about to head to Montana to take care of business.
– Cassie knows Max is lying to her about the keychain, so she trails Max and sees her with Harper, who she then follows to her job at the diner, orders a coffee, and snags the coffee cup to take Harper’s fingerprints to see if they match the keychain found in the woods.
– The watcher in the woods is in serious trouble. He saved the teens from Harvey, and for that Harper thanked him, and for whatever reason, he’s still been following her. When she notices his van behind the diner where she works, she goes to check on him and realizes he was shot in the woods and has been steadily bleeding out for, I don’t know, a few days now? It’s like I always say, it’s a thankless job being a peeping Tom with a heart of gold.