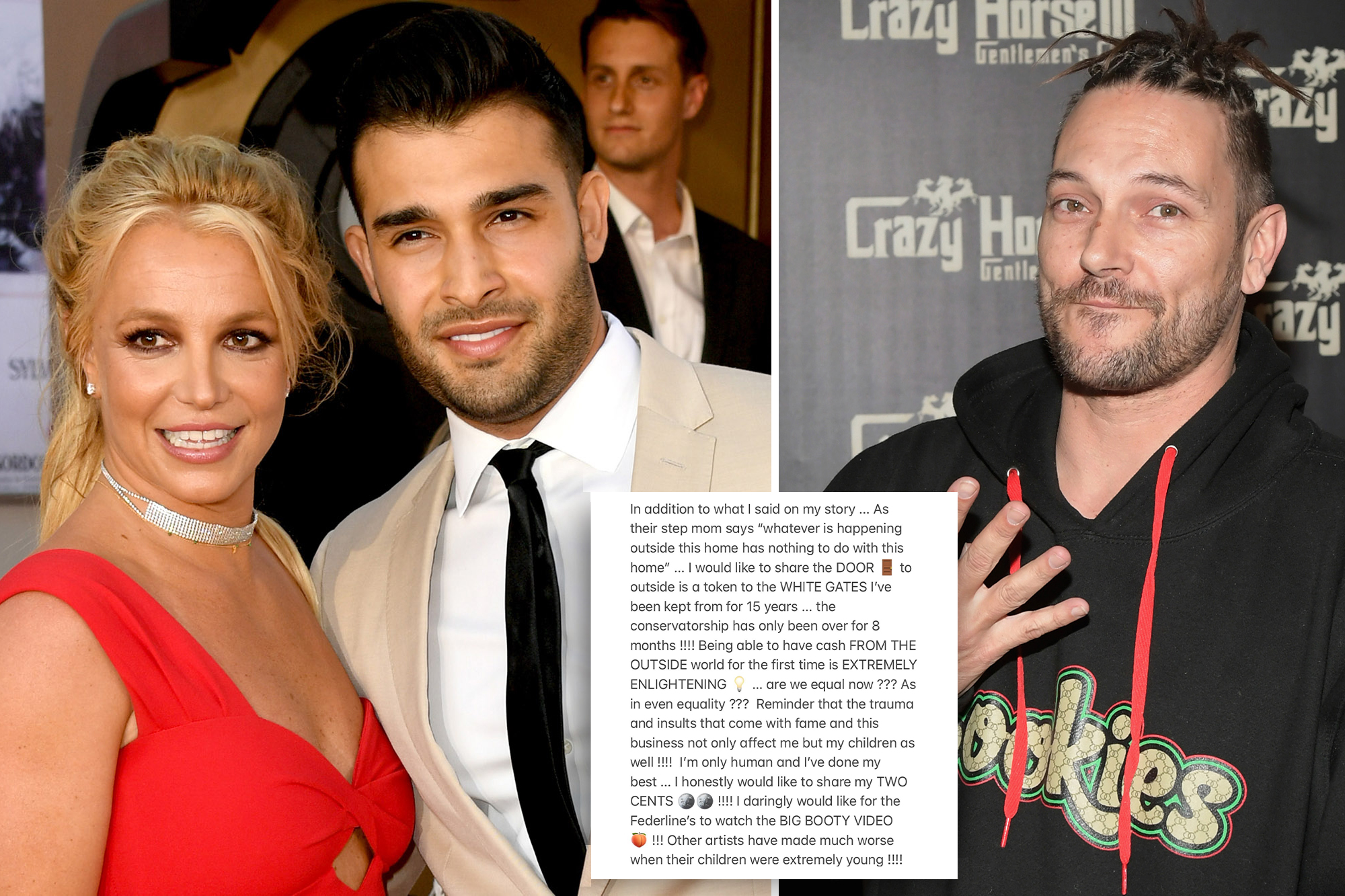 Britney Spears has ripped ex-husband Kevin Federline for revealing that she is estranged from their teenage sons — while admitting their troubled relationship started “LONG before” he said.

“It saddens me to hear that my ex-husband has decided to discuss the relationship between me and my children,” Spears, 40, said in a midnight Instagram story after Federline’s interview.

“As we all know, raising teenage boys is never easy for anyone,” the troubled pop star wrote of sons Preston, 16, and Jayden, 15, who did not attend her recent wedding.

Spears lashed out after her ex revealed that she had not seen their sons for months — even though they live just a 3-minute drive away from the sprawling Calabasas mansion she bought with new husband Sam Asghari in June, The Post can reveal.

Spears’ sons live just a 3-minute drive away from the Calabasas mansion she bought with new husband Sam Asghari in June.SplashNews.com

However, her biggest complaint was that Federline claimed that the falling out was recent — and based on the boys’ anger at their mom’s racy naked social media photos.

“It concerns me the reason is based on my Instagram … It was LONG before Instagram,” she insisted.

“I gave them everything,” she insisted. “Only one word: Hurtful.”

Britney Spears and Sam Asghari arrive at the premiere of “One Upon A Time…In Hollywood” at the Chinese Theatre on July 22, 2019 in Hollywood.Kevin Winter/Getty Images

In a follow-up post early Sunday, she wrote, “Reminder that the trauma and insults that come with fame and this business not only affect me but my children as well !!! I’m only human and I’ve done my best.”

In that second post, Spears said her ex should not be speaking out because “whatever is happening outside this home has nothing to do with his home.”

However, she again blamed her once-controlling parents for her latest woes with her own kids.

Britney Spears has ripped ex-husband Kevin Federline for revealing that she is estranged from their teenage sons.Bryan Steffy/WireImage

“I’ll say it… My mother told me ‘you should GIVE them to their dad,”‘ Spears claimed of her 67-year-old mom, Lynne.

“During my conservorship [sic] I was controlled and monitored for nearly 15 years,” she wrote in her rambling follow-up message.

“I needed permission just to take Tylenol !!! I should embark on doing WAAAY more than going topless on the beach like a baby !!!!” she said of her racy posts that supposedly angered her sons.

“I’m not surprised that just as my family did their share of interviews, they will too,” she said, seemingly referring to her teen sons and their dad.

“It saddens me to hear that my ex-husband has decided to discuss the relationship between me and my children,” Britney Spears said in an Instagram story.Instagram

“I’m not surprised at all with their behavior and their approach to what I’ve had to deal with !!!” she said.

In his Daily Mail interview, Federline, 44, said that their sons “have decided they are not seeing [their mom] right now.

“It’s been a few months since they’ve seen her. They made the decision not to go to her wedding,” he told the outlet.

He also insisted his ex-wife was “saved” by the 13-year conservatorship by her dad, Jamie, whom Federline said had been “put through the wringer” with bad publicity.

“I would absolutely welcome Jamie Spears back in the boys’ lives,’” he said of Spears’ dad.

Meta faces lawsuits over teen suicides and self-harm
Love and cherish your parents ...