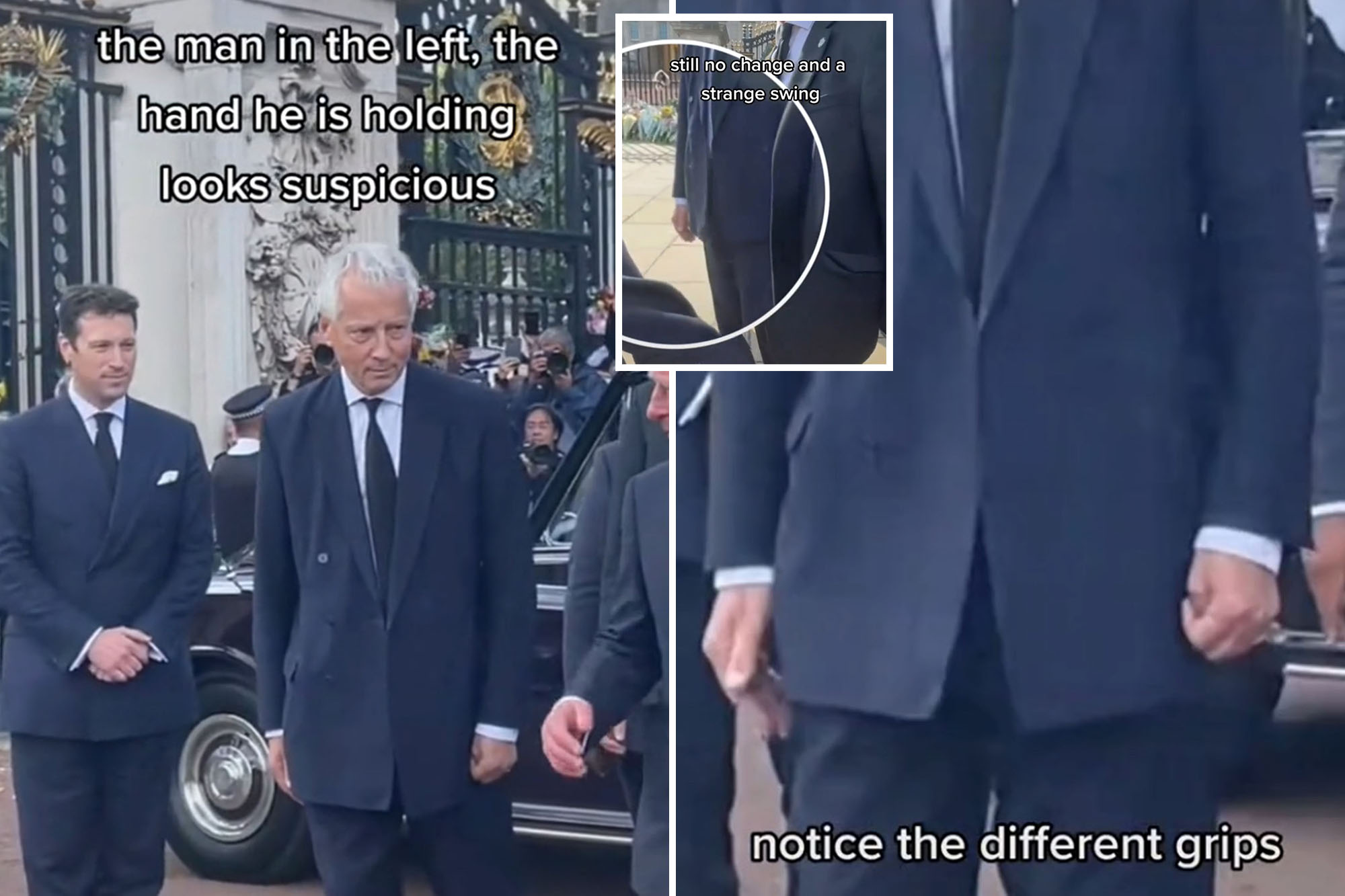 Give him a hand.

A bizarre video of the new monarch’s bodyguard holding his hands in a peculiar position has sparked a bizarre new conspiracy theory that his karate choppers are fake. Clips floating the wild supposition currently boast millions of views on TikTok as viewers debate whether the security detail’s mitts are for real.

“King Charles Security, do some have fake arms?” @jace_the_ace_ posits in one of the controversial videos with 27.4 million views. The accompanying clip shows footage that emerged last week of King Charles III, 73, strolling the grounds outside Buckingham Palace with his security team in tow.

The clip then zooms in on the man to the left of King Charles III, his “hunky” equerry Major Johnny Thompson, who is holding his hands together in such a stationary manner that they look like a wax figure.

“The man on the left, the hand he is holding looks suspicious,” the TikTok conspiracy theorist declares. “It looks to be inanimate.”

The clip then cuts to a taller man with white hair who is posing in such a way that his left fist is clenched while the right is open and dangling, leading @jace_the_ace to speculate that his left arm is “fake.” The TikToker thought it especially suspicious that the man’s hand didn’t move even while his arm was swinging while he walked. A third frame showed a bulge in the man’s left jacket pocket, presumably a firearm.

In another video posted by @kevhead22, which boasts 4.8 million views, one of King Charles’ bodyguards can be seen assuming the same motionless stacked-hand position while accompanying the sovereign on a stroll outside Cardiff Castle. The caption reads, “What’s going on with the bodyguard’s hands?”

Needless to say, the TikTok commentariat had their own theories with some speculating that the hands were actually decoys to distract criminals while their real mitts held their weapons at the ready.

A closeup of a bodyguard’s clasped hands.
TikTok / @jase_the_ace_

“Real hand is already on his gun in case,” said one online conspiracy theorist, while another wrote, “It’s because he’s an armed guard, his real hand is inside his jacket holding the gun, this isn’t new or a secret.”

One armchair bodyguard added, “Secret service does this in America too. Prop hands. Their real hand is on loaded gun under the jacket.”

“Right arm is real, left is false so he can conceal a weapon at ready state,” said another.

One poster found it suspicious that this bodyguard’s hand didn’t change position even while he walked.TikTok / @jase_the_ace_

TikTok theorized that the bodyguards possessed decoy hands to distract potential assassins while their real mitts held their guns at the ready.TikTok / @jase_the_ace_

However, security experts have since dismissed this false hand theory.

“They definitely aren’t fake hands,” Will Geddes, an ex-bodyguard with 30 years of experience, told the Metro. “I can understand why some people might have thought they were because of what looks like an incredibly tight grip but they definitely aren’t.”

He added, “It isn’t a tactic that is used at all in the UK, there might be all sorts of other tricks and stunts that security officers use to make sure high-profile individuals are kept safe, but this wouldn’t be one of them.”

The former security concluded by cheekily quipping that while counterfeit mitts “could be used in the U.S., where they are more trigger happy,” they aren’t employed in the UK.

Khloé Kardashian, Tristan Thompson's daughter True starts school
The man who slapped Rudy Giuliani on the back to get the assault charge dropped