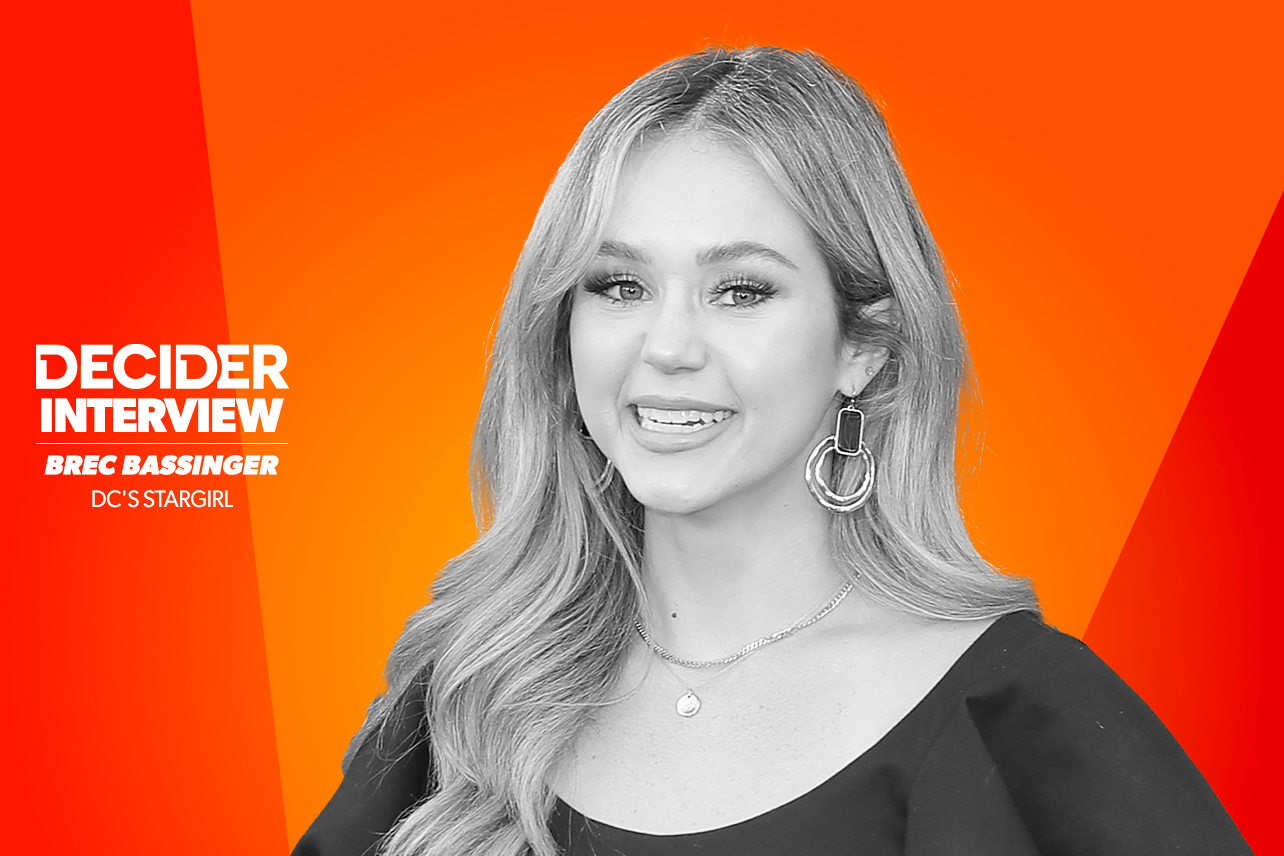 Tonight on The CW, DC’s Stargirl is finally back for Season 3. And when it does return, there are some big changes coming to the show… Not only are Stargirl’s (Brec Bassinger) former enemies now her “friendly” next door neighbors, but Starman (Joel McHale), the inspiration for her heroic character, is alive and bunking in the Whitmore household.

“With Starman finally being front and center this third season, there’s so many questions that get answered,” Bassinger told Decider. “The storyline has been teased since the end of Season 1. So I’m excited for audiences to finally get some clarity on why is he back, and what does this mean for Courtney, and the staff.”

To find out about what this does mean for Courtney and the rest of the residents of Blue Valley, read on:

Decider: Biggest, broadest possible question to start off: what’s it like coming back for Season 3?

Brec Bassinger: As an actor, everything I’ve done previously, Season 2 has been the end of it. So getting to do a third season of a show, it was so fulfilling. It felt like a goal of mine has been reached. And also, I have to say, coming back, you always hear that,” oh, cast and crew are family,” but I’ve never experienced this extent of working with people at this point. We’ve known each other for four years. And so the amount of fun we had this last season, filming this third season was beyond my expectations.

This is also the second season filming with COVID protocols.

Was it smoother and easier this time around? Or was it still pretty locked down?

So funny. It’s like second season, it was so extremely locked down, and we are one of the few shows that didn’t get shut down due to COVID. And then third season, it was much lighter. People had more information. It did feel like a weight kind of lifted off everyone’s shoulders. But obviously there was still tons of COVID protocols, but I feel like at that point we became a well-oiled machine.

I want to ask you about the biggest change to the show this season. And it’s a huge one. What was it like working with Luke Wilson’s beard?

[Laughs] Oh my gosh. That’s not where I was expecting that to go. I was expecting Joel. And as soon as you said Luke, I was like, “wait.” You know, he’s a handsome feller. Funny enough, he’d actually been growing out the beard for a different role. And he had talked to Geoff [Johns] about keeping it. And Geoff is very like, this is how it is in the comics. We love that. I get it. But he had finally talked Geoff into the beard and then he ended up not filming the movie. So he didn’t need the beard anymore, but we all saw him at the table read the first week and we’re like, “oh no, no, the beard has to stay. Absolutely.” And now that I think there’s a whole Twitter dedicated to his beard, which is absolutely hilarious to me. That’s it. He looks good.

Yeah, he does! I do, of course, want to ask you about working opposite Joel McHale, since he’s such a huge part of the season. Without getting into spoilers too much, over the episodes I watched, there’s such an interesting push and pull between him and Courtney.

Working alongside Joel was truly such an honor. Most people have just seen him do comedy. That’s been most of his career, and it was so cool to get to see him show up on set. And obviously, he’s very hilarious. It was a running joke who would get the button, Joel or Luke. But then also seeing him do this emotional — angry, sad, acting — I was so impressed by him, not only as an actor, but as a human being, as well. And then with Starman finally being front and center this third season, there’s so many questions that get answered. The storyline has been teased since the end of Season 1. So I’m excited for audiences to finally get some clarity on why is he back, and what does this mean for Courtney, and the staff.

Again sort of skirting spoilers a little bit here, not that Courtney is doing the leaving her costume in the garbage can thing, saying, “that’s it, I don’t have to be Stargirl anymore,” but it does seem like it allows her a little bit of a possibility of pulling back.

I loved it because as much as I love how gung-ho she is about Stargirl, she’s always been the one to talk about balance, but she’s been the last one to have balance. It’s been Stargirl all the time and it’s prohibited her from pursuing someone she has a crush on, and things like that. So it was fun for her to get some more superhero/life/school balance.

Another big change is you’re using a mystery structure, down to the titles before each of the episode. How did that change how you approach things, if at all?

The writing definitely enhanced that tone of the mystery aspect, in that it’s very “who done it?” And there’s scenes that cut back and forth between the crime scene. When we were talking about it, to give that very murder mystery feel. On set, it did call for different shots in different filming. And we would say a line, and have to pause for a flashback or things like that. But our writers are so amazing. I feel like they did the work for us.

You’ve also got all of the villains in town, which is a ton of fun. The Crocks in particular are like the crazy sitcom neighbors.

They were with us so much Season 1, but it was fun for them to come back. And I hope I’m not over speaking, but from my knowledge, they really were just supposed to be in Season 1. But we loved them so much on set and their characters fit in so well to the show, because they have those villain tendencies, but they’re hilarious and they want to be good. They have good hearts. So I was so happy when I found out they were going to be coming as series regulars this third season. I just feel like they fit in perfectly to the tone of Stargirl.

Meg DeLacey’s Cindy also is trying very, very hard to be friendly to everybody this year. I imagine it was nice to not have to battle her every time out of the gate?

I mean, yes, but I can’t lie, the Shiv/Stargirl battles are some of my favorite because they’re just so catty and emotional, but gruesome. I kind of missed it. I can’t lie.

You’ve got villains who are trying to be a little bit better in town. You’ve got this mystery structure. You’ve got Starman back. The theme of Season 2 was very much about Eclipso trying to break Courtney down. So given all those seemingly disparate elements, what’s the theme this year? What’s the big challenge facing Courtney?

Coming off of Season 2, she very much believed and learned that not everyone is bad, and not everyone is good, but that there’s good and bad in everyone, and everyone deserves a chance for that reason. So coming into Season 3, she has that in the forefront of her mind, but she has to get everyone else on board with her. First of all, she [has the] challenge of her finding balance with Starman, but then also committing to what she learned in her past, committing to giving every single person a chance. And sometimes it might not work out for her.

We got a tease of Mr. Bones at the end of Season 2… How much will he be playing into this season?

Mr. Bones is back. Jennie is back, and we definitely get to explore a little bit more of what’s going on at the… Helix Institution, which is where we last saw him in Season 2.

No pun intended with the ice powers, but the romance with Cameron seems to be heating up this season. What can you say about that?

Another storyline that has just been the longest slow-burn ever. And I am, I’m so happy that people are finally going to get to witness that. As an actor, it was so fulfilling because we had been pointing, alluding to this romance since Season 1, so we finally get to follow through with it. And God bless Hunter [Sansone]. He is such an amazing actor, and I was so excited to get to work with him more and we have some really wonderful scenes and good stuff. So Camney is front and center. Finally.

With the announcement of the end of The Flash, granted there’s an entire other season coming, but Stargirl is one of the last extended Arrow-verse shows standing, which I imagine is a little bittersweet.

I know people on these shows, so of course I’m sad and emotional for all of them. I’ve seen how much work it takes to make these shows, but I’m just so grateful for what we’ve gotten to do. I’m so proud of the show that I’m part of, and fingers crossed it gets to keep going, but regardless, I’m so honored to be a part of this, this Arrow-verse.

There’s obviously a lot of uncertainty in the industry right now. And I know this isn’t specifically your department, but what are the chances of a Season 4? Or at least, what can fans do to hopefully give that extra nudge to get a Season 4 of Stargirl?

Geoff, our showrunner, for lack of a better term, this is his baby and he’s put so much love, and I’ve heard Season 4 pitches, and I know he’s not leaving any stone unturned to get it to continue. But I’m just so grateful. There has been so much fan push on Twitter and Instagram, and it has made me and Geoff and the whole cast and crew feel so loved, because we do work hard on it. So it feels good that they’re rooting for us.

DC’s Stargirl airs Wednesdays at 8/7c on The CW.