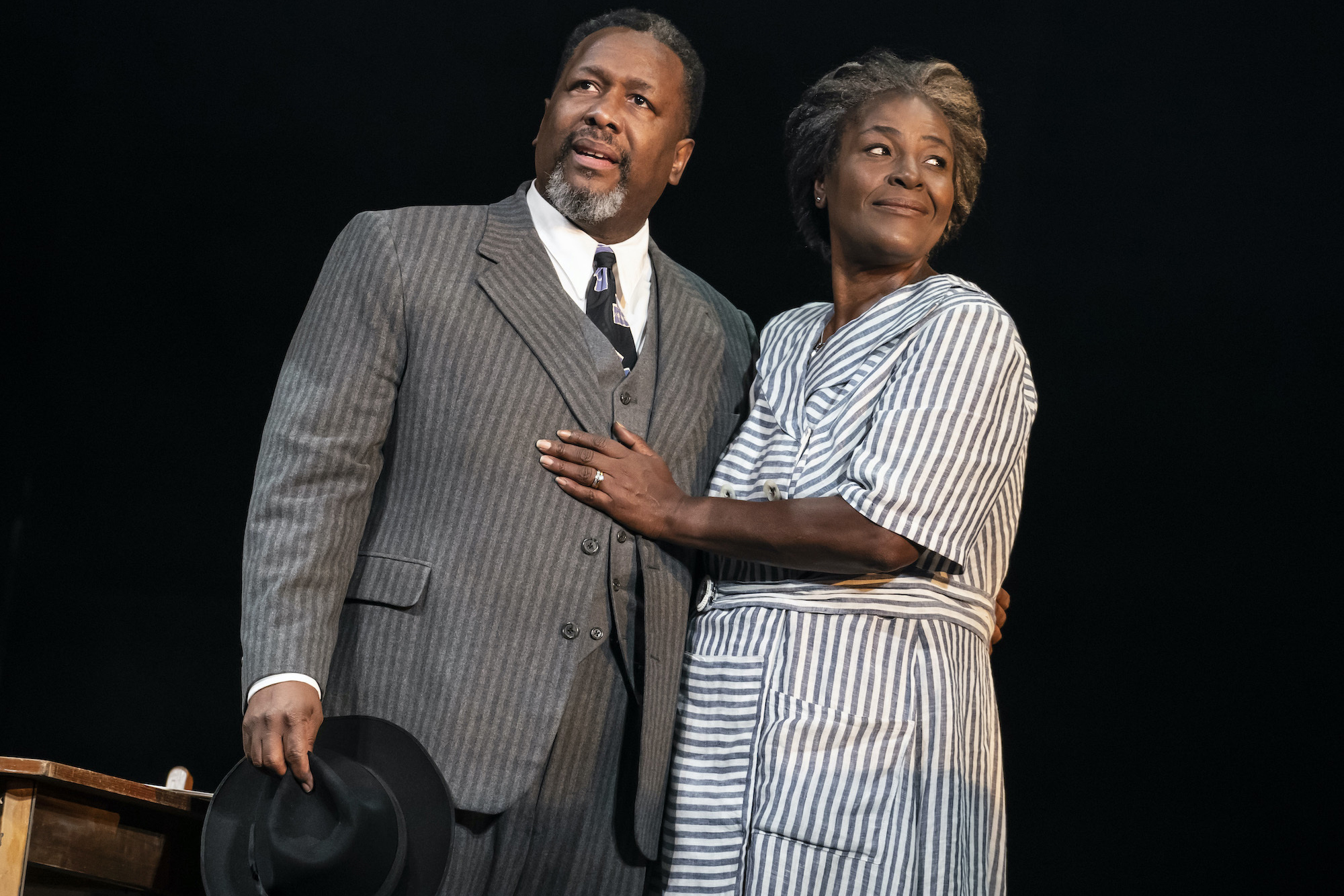 There are more tricks than exciting drama in the latest revival of “Death of a Salesman,” which opened Sunday night on Broadway.

Jazz music often underscores and pacifies the action, and characters will sing out their pain, needlessly, after delivering some of the most famous monologues ever written.

3 hours and 10 minutes with one intermission. At the Hudson Theatre, 141 West 44th Street.

The stage is bathed in dreamy purples and blues, looking more like Tennessee Williams’ memory play “The Glass Menagerie” than the craggy tale of Arthur Miller’s Willy Loman.

And in scenes that briefly whisk us to a more promising past, there are bright, rapid-fire camera clicks that take the word “flashback” a tad too literally.

None of these add-ons refresh or galvanize the story — they sedate it like theatrical Xanax.

Revivals should shake things up (though the 2012 revival starring Philip Seymour Hoffman reused Jo Mielziner’s famous original set to great acclaim), but in director Miranda Cromwell’s production from London they contribute an animatronic, distant quality to what can be a profoundly moving and reliably relatable play.

The pieces don’t connect, and neither do we.

Wendell Pierce and Sharon D Clarke are Willy and Linda Loman in “Death of a Salesman” on Broadway.

This time around, a cast of black actors plays the Loman family, and that is the revival’s most enlivening aspect. When Willy’s white boss Howard (Blake DeLong) speaks to him dismissively, for instance, there is a newfound racial subtext that works well without altering the script at all.

Wendell Pierce of “The Wire” and Broadway’s “Clybourne Park” takes on the role of that old titan of American patriarchs, Willy, the 60-year-old traveling salesman who proudly boasts of his success and popularity when his life is secretly in shambles. For the most part, Pierce sells it.

But his Willy is a loud performance, and the actor seems to revel in Willy’s bluster and braggadocio — the showy bits. He’s at his best, though, when he finds morsels tenderness and introspection for this imposing figure. It’s in those parts when the actor’s energy — often too frenetic — has real, powerful focus.

His unfailingly supportive wife Linda is played by Sharon D Clarke, from last season’s musical “Caroline, Or Change.” Whereas Caroline was stalwartly cold, Clarke’s Linda is an amiable “Stand By Your Man” type. She never recoils when Willy shouts at her, and in her dewy eyes he can do no wrong. At times, her constant devotion bowls you over; at others, it is one-note.

And Khris Davis is Biff, the favorite son who moved out West against Willy’s wishes and can’t live up to his father’s lofty dreams. Davis is a genuine performer, but his Biff doesn’t have much rebel spark or glimmers of Willy’s passed-down ferocity. Not much is memorable about it. Why Biff traveled to another coast to be with horses, and what he desires for him and his brother Happy’s (McKinley Belcher III) lives gets short shrift.

The actors are not helped along by Anna Fleischle’s uninspired set — window and door frames, furniture and assorted boxes that fly up or slide in and out when needed. They lack sturdiness, never give the illusion of a home and conjure no feelings from us. I was also put off by a narrow beam of light that shakily traverses the stage whenever the ghost of Willy’s older brother Ben (André De Shields) enters. It looks like somebody pressed the wrong button on accident.

“Salesman,” always a long sit, settles on an even-keeled gear early on and stubbornly sticks to it — so the production feels endless. The climactic fight all the way to the inevitable conclusion is not affectingly tragic, and there is no build to speak of.

Nice songs, but not enough attention was paid to the basics.

'Iron Men' make jet suit entrance onto HMS Queen Elizabeth
I regretted that so much took her shopping after this ib ...