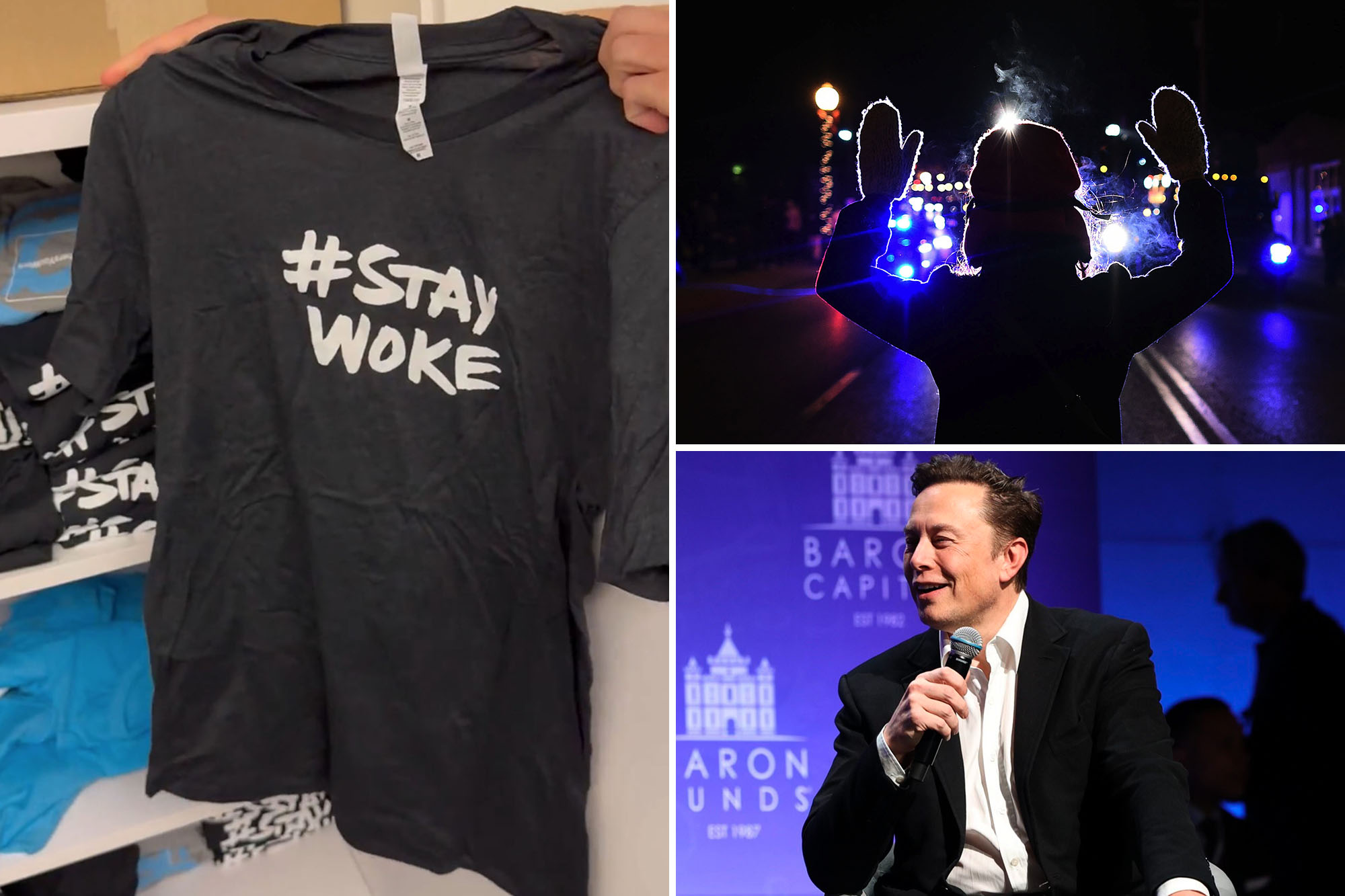 Elon Musk is literally cleaning out the closets of Twitter, laughing after finding a stack of unworn “Stay Woke” T-shirts.

The world’s richest man posted a video late Tuesday of him holding up one of the progressive-slogan shirts in a video seen more than 10.2 million times in just hours.

“Found in closet at Twitter HQ fr,” he captioned the clip, adding two laughing emojis to the message in which “fr” is short for “for real.”

In the clip, someone can be heard chuckling as Musk, 51, shows stacks of the shirts, one of which Twitter co-founder Jack Dorsey had himself worn in 2016.

“Here we are, at the merch thing, and there’s an entire, entire closet full of hashtag woke T-shirts,” Musk says over his laughing pal, who calls it a “secret closet.”

He displayed one of them with the hashtag “Stay Woke” on the front.
Twitter / @elonmusk

Someone with Musk laughed as he pointed out the stack of unused shirts.
Twitter / @elonmusk

“You must love losing prospective Tesla customers. I am woke,” one person snapped back, bragging about having “more than enough $$ to buy a Tesla auto or home electrical system.”

“But I won’t because I won’t send my hard earned $$ to a company run by a guy who disparages people who care about other people,” the follower complained.

Musk’s predecessor, Twitter co-founder Jack Dorsey, had proudly worn one of the shirts in 2016.Recode

A former Twitter employee, Sioban Massiah, also asked Musk to “Please send them to me.”

“We worked hard on that merch and I’d rather distribute it myself than to know it is in a garbage can,” tweeted the former live event programming associate producer for Twitter.

Noting the mass exodus since Musk bought the social platform, Massiah also asked sarcastically: “Is anyone in the SF office still?”

Musk further enraged followers with a since-deleted tweet in which he revealed that the shirts he was laughing at “stem from the Ferguson protests” over the 2014 Missouri police shooting of 18-year-old Michael Brown.

“Obama’s own DOJ proved this & exonerated the cop,” Musk pointed out of officer Darren Wilson, who quit the force but was never charged.

“‘Hands up don’t shoot’ was made up,” he said of the rallying cry by protesters who claimed the teen had his hands up in surrender when he was fatally shot.

“The whole thing was a fiction,” Musk said, deleting the tweet and instead posting a copy of the federal report that concluded there was no reliable evidence that Brown had his hands up.

Musk insisted that the rallying cry of “Hands up! Don’t shoot!” was all based on “a fiction.”AFP/Getty Images

The Justice Department did, however, accuse Ferguson cops of racial bias and profiling in a damning report that led to the city manager, police chief and municipal judge all resigning. Brown’s family also settled a wrongful death lawsuit with the city.

Musk appeared to acknowledge as much in a later response to critics, in which he again said that “the Ferguson protests were – if you believe Obama’s DoJ – based on a false premise” because the investigation ruled that Brown’s shooting “was unequivocally self-defense.”

“That’s not to say that other injustices don’t occur, but this does not appear to be one of them,” he wrote.

Teotihuacan Pyramid in Mexico City in 1900 and in 2022. The 1900 view looked like a random mountain until the excavations and clean-up began.
Will ‘The Kardashians’ Return for Season 3 on Hulu?