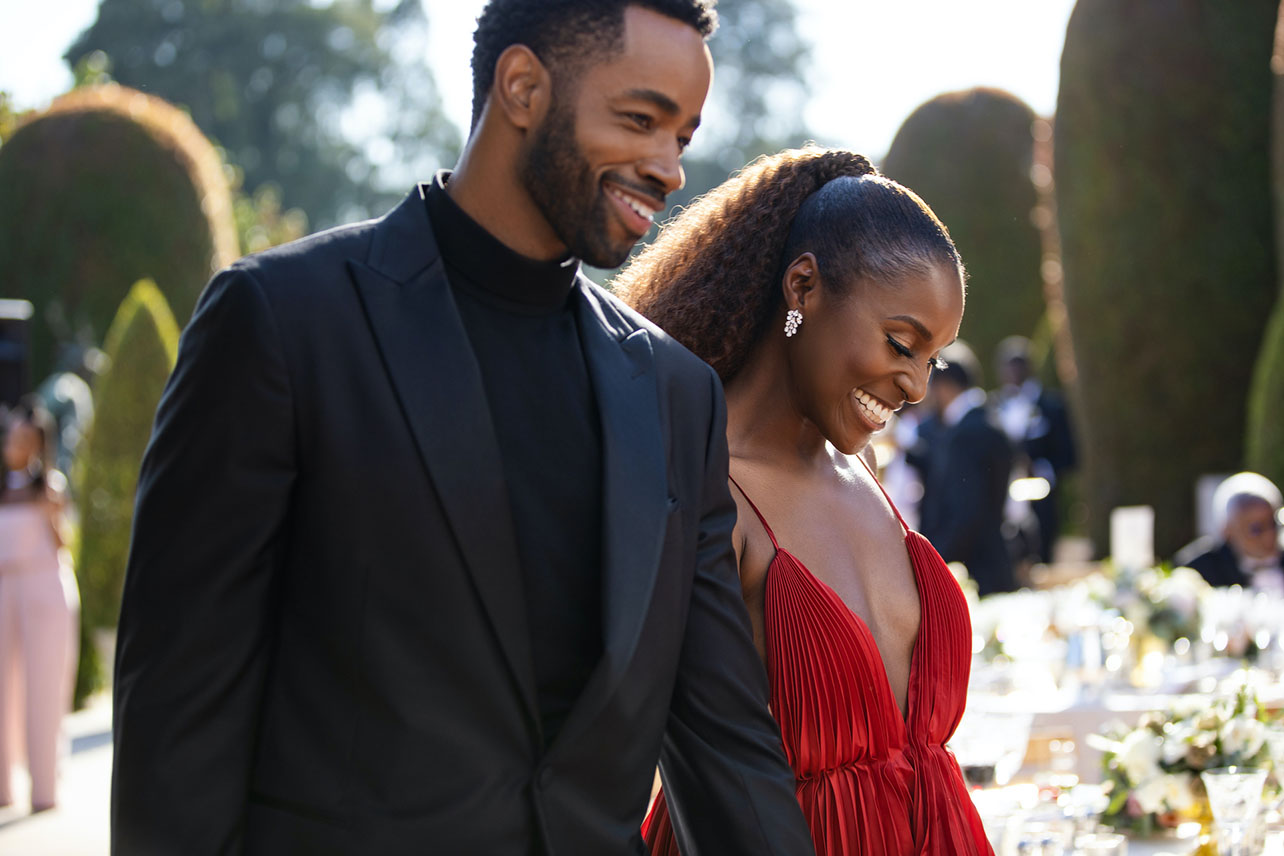 Since finding her webseries The Mis-Adventures of Awkward Black Girl on YouTube in 2011, I’ve been a fan of Issa Rae & her work. I’d rarely seen such specific Black female characters portrayed on screen so fully. Most portrayals I’d seen of awkward Black girls up to that point were typically as the butt of jokes told from someone else’s perspective, not as the narrative agents in their own stories.

Insecure’s series finale felt like reading a great book. From the characters’ long-running inside jokes to appearances from actors fans have been with for over a decade, “Everythings Gonna Be, Okay?!”This has created a visual shorthand that crosses nearly every emotion. “t”, dotting everywhere “i”, & putting a bow on the story we’ve been enjoying for five seasons in a way that reminds me of the Jane Austen quote: “My characters shall have, after a little trouble, all that they desire.” I’m very grateful to see stories like this populated by characters who look like me.

The finale starts right after the fight that took place at the end the last episode. Nathan breaks up with Issa while dropping her off from Tiffany & Derek’s going away party, mirroring Issa ending things with Lawrence at the end of the season opener. This is just one of many callbacks in an extremely satisfying episode.

I’m also proud of Nathan for not being avoidant with his feelings and letting Issa know that their relationship messiness and toxicity wasn’t good for him. Yes. Focus on yourself, King. Mirror Issa does not let Issa off the hook for this one & plays the role of the nagging voice kicking her while she’s down.

From here, the episode keeps to the main characters’ promise from the last episode to get together for each of their birthdays, which works as a great narrative time travel device. We cover almost 2 years in just 40 minutes. And we get the answers to (some of) Molly’s edible-induced questions: “Can you just imagine how much we’ll change like… in 2 years. Who’ll have another baby? Who’ll get a new job? Who’ll be taller or smaller? Or both?”

Molly’s birthday is up first. Tiffany’s back in town. Kelly’s got a new man. And Issa & the birthday girl continue to be amazing friends to each other. Meeting Andrew’s family went left leaving Molly with anxiety about Taurean’s who are there for Molly’s party. Issa comforts her friend, helps her pick a bomb outfit, & lets her know “tonight we’re focusing on you, and having fun, & nothing else.”

We hear that refrain again at Issa’s surprise birthday party and fundraiser for The Blocc at Crenshawn’s workshop – planned by Quoia. And Molly. TOGETHER! Molly & Issa are quoting each other’s quotes. Kelly & Ahmad still have beef – very immovable object versus unstoppable force energy. And Nanceford (a call back to Issa & Nathan’s second meeting) shows up with a donation from the shop and parts ways with Issa feeling no regrets about their time together.

Next the squad’s in Denver where Tiffany confides in her friends that she’s frustrated and isolated in her new home. But at least her friends are there for her birthday, whereas Derek’s friends from LA haven’t because by his admission “men suck”. Issa downplays the significance her new romance with Nasir“He’s cool.” … “It’s not like that. I’ve got way too much going on.”). And just as Molly’s giving Issa some great advice about Lawrenceand not overthinking her happiness  – and boy have the tables turned! – she gets a call from her brother Curtis that her mother has died.

As soon as I realized Lawrence’s birthday was included, I knew what was coming…. We are here because why? He wasn’t a part of the pact! Regardless, Lawrence’s family is always a treat and feels so familiar. I know it’s original but the “Happy Birthday in Jesus’s Name” song feels like it’s always existed. And Lawrence’s mom’s appraisal of Condola cracked me up. “She’s a great mom. Dresses Nice. One Braid. I like it!” Just then Issa calls as awkwardly as ever, rambling & delving into a Louis Armstrong impression before Lawrence can get out a full sentence. Lawrence has plans, and another date we never learn the name of!Issa hangs up without any resolution. Molly, in grief, sends Issa an email.

Kelly is glowing in kelly green and a high side pony at her birthday dinner – probably because she’s pregnant! By Desmond He is who he may be! They did meet! I’m glad Kelly gets her happy ending (including helming the new estate division at Molly’s firm!), but as usual, her story is used as more of a foil for Issa’s development. She shows up with Nasir, an off-Broadway Handsome Squidward iteration of fan-favorite Daniel & seems happy but stunned at Kelly’s news.

Later, in some beautiful lingerie, Mirror Issa starts in on her again – attacking Issa at her most vulnerable – and comparison is the thief of joy! Mirror Issa claims that she nearly spits out Nasir. “a fine ass man ready to dick [her] down!”When Lawrence calls, I’ll be there. I’ll be hearing “BITCH! DON’T YOU FUCKING DARE!” in my head for … a while. Molly is in her grief and unreachable.

But her birthday is up next, which means we’re at a year and some change out from the last episode. Molly’s working to cover grief AGAIN & Issa reminds her it’s ok not to be okay. Issa gets this nugget in return from Molly: “You can make all the plans you want but it’s always gone be some shit.”

For reasons I still can’t quite figure out, Issa’s called Lawrence to come to The Blocc’s new office space later that evening. Is he an investor new to the Blocc? Is The Blocc creating an app? What pretense do they use to bring these two together? Did they first meet after his birthday or did they just hang out? Honestly, it doesn’t really matter because seeing them in the two shot separated by the pole in muted earth tones brought the whole thing home & evoked the infamous red & blue shot from Season 4’s “Lowkey Happy.” Issa’s professional confession that she  “believes that it would work out for it to work” functions like so much dialogue in the show in that it means multiple things…. And in this case, it means she & Lawrence are about to hook up right there on the desk.

The show takes a break from celebrating birthdays and presents us with a wedding! We’re introduced to Mr. & Mrs. Taurean Jackson in a scene that brought me to tears. There’s a memorial to Molly’s mother, Tiffany is pregnant with her second child, and Issa is there. Lawrence. As anti-Lawrence as I’ve been, this scene felt like a true family affair. And when you think about it, Issa & Lawrence were together five years before the pilot started and that depth is apparent.

Issa helps Molly out of her wedding dress & the two share words that just as easily could have been exchanged between Yvonne Orji & Issa Rae. “Thank you so much for everything, Issa. Just for being you. For loving me while I was me.”Insecure is a show that shows so many nuanced relationships so beautifully. The central love story of Insecure is the friendship between these two women.

Finally, it’s Issa’s birthday again and she’s leaving The Blocc’s new office space in a Lexus red power suit for a literal drive down memory lane. She passes The Dunes, where Lawrence lived with her, and sees ThugYoda and his child. Tristen Winger, the actor who played Baby Voice Darius in Awkward Black Girls, will be well-remembered by fans. Issa, who drives by We Got Yall, sees her old coworkers, including actress Sujata, another OG ABG alum. She smiles at a man wearing a Best Buy shirt after passing the Rite Aid, where Lawrence confronted them while she was buying panties.

Her home is gorgeous! And Issa is in full stepmom mode with Baby Jah & their blended family. We don’t see Condola in the finale but I think it’s safe to assume their co-parenting skills are a well oiled machine by now. The couple get a sitter as Lawrence prepares to take Issa out for her birthday – coming full circle from him forgetting her birthday in the pilot and wanting to eat take out on their couch instead.

I almost missed Issa’s engagement ring in the series’s final scene. It’s never explicitly stated but when Molly calls from her honeymoon, Issa asks if that’s what she has to look forward to – which I’ll take as confirmation. In a bold move, the show ends with a broken pussy callback joke – again from the pilot, an empty mirror, and Kelis’s “Bossy.”No Mirror Issa and her nagging doubts. No regrets. Issa Dee is a mature, confident woman who has her whole life ahead. Again, I’m very grateful to see stories like this populated by characters who look like me.

Rebecca O’Neal is a stand up comedian and writer in Brooklyn. Check out her jokes at Comedy Central.