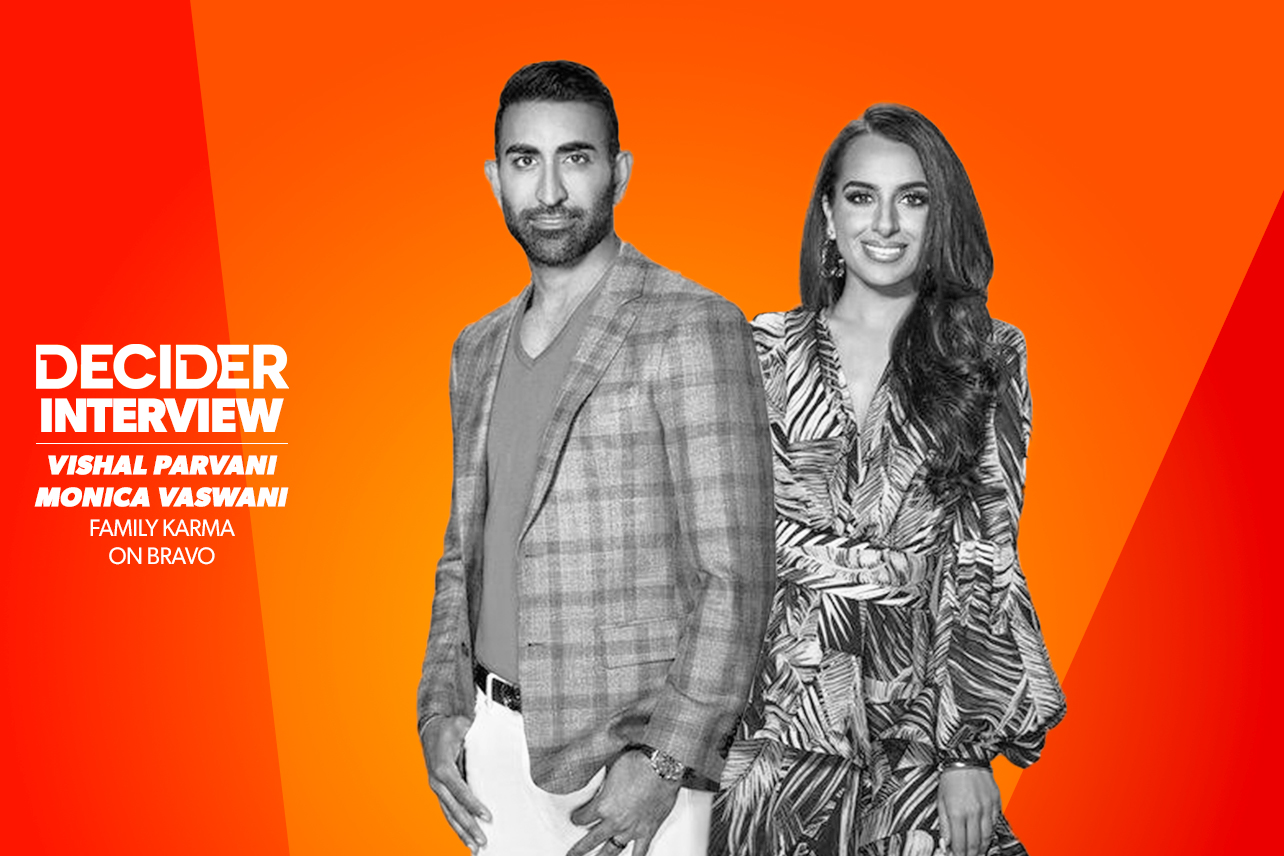 Family Karma is the first ever reality show centered on an Indian-American group of families, delving into the dynamics of an immigrant community with plenty of space for interpersonal drama. Entering its third season, the Bravo series picks up in Miami with Vishal Parvani and Richa Sadana’s long-awaited destination wedding, while also re-familiarizing audiences with the full cast of characters. Among the faces returning are mama’s boy Brian Benni who is on the quest for a new girlfriend after breaking up with ex Monica 2.0 between seasons; perfect Indian girl Monica Vaswani who is patiently awaiting a ring from her boyfriend Rish, though she may have to deal with some of his secrets first; and out and proud lawyer Amrit Kapai who is planning his own wedding to fiancé Nicholas.

Monica and Vishal sat down with Decider to talk about their reality star journeys thus far, how it feels to rep the Indian-American community, and what to expect from the new season, which premieres on Bravo on November 6.

DECIDER: This show is so relatable to all immigrant communities where family friends are as close as actual family. How has your life and your family’s life changed since the show started airing?

MONICA VASWANI (MV): It’s been amazing for us. It’s been such a fun journey to go through this with our friends — people that we’ve grown up with — and to see us all evolve and change. For me, it’s most important to celebrate everyone’s wins. Whenever I see one of us get an opportunity, I’m cheering in the background, ready to pop champagne. To go on this journey, where we didn’t know what it was going to become and we didn’t know what the final product would look like… now going into season three, it’s seriously a pinch me moment.

VISHAL PARVANI (VP): I wouldn’t say life has really changed. I don’t think our parents would allow us to act any differently than we ever did. They would really put us in our place. The only change is being recognized in public, but in the day-to-day dynamics within our families, nothing has changed.

Is it ever weird to all hang out now without the cameras being there?

MV: No because I have a rule: we’re not allowed to talk about the show or anything that’s already happened. We lived through it. After that point I just want to get to know what you’re doing right now and enjoy the current moment.

One of my favorite parts about the show is that the aunties have their own drama separate from the kids’ drama. Was it ever weird for you that your parents had access to things you might have been hiding from them?

VP: I hate it! I hate them knowing any drama that’s going on in my life. Now if I’m not telling them, they’re going to see it later, so it’s a new territory for me. Some of my friends do tell their parents every single thing, but when it comes to my issues, I normally just keep them within my friend circle. Parents always over-dramatize everything and so it’s hard to bring them into picture.

Do you have any regrets about being on a reality series with your personal lives becoming public interest?

MV: I have to say that I’ve been very lucky and everybody’s been so kind. The one thing that I was most nervous about when signing up to be a part of this platform was that our parents and grandparents are doing this with us. You get worried about what people on the internet are going to say. Are they going to be nice to them? Are we going to get trolls? More than protecting myself, I wanted to protect my family and make sure that it was going to be a positive experience. Everybody has been so kind. People have been stopping my dad to get selfies and sending him gifts… It’s been an incredible journey. No regrets.

Monica, your relationship with your dad is one of the highlights of the show. What has it meant to you to share this experience with him?

MV: It’s a bonding experience. He’s the best girl dad and he supports me more than anybody I know. Sometimes I’ll wake up at 6am and ask him to take a picture of me in this Indian outfit, and he will get up and come out with a tripod. He’s like, Okay, we got this. We’re gonna figure it out. Do you like this background? He’s very encouraging. We’re making memories and then we get to watch these memories back on TV too.

VP: I’m so excited that it was filmed because I don’t think there’s ever been an Indian wedding on national television. I’m super excited to show all the different events because everyone always talks about Indian weddings and wants to be invited to one. Here’s your chance! You are invited to our wedding and you’re gonna see all the different traditions that go along with it. I’m less excited about all the drama that also comes with the weddings. But it’s natural. It’s not a wedding unless there’s drama, right?

What does it mean to you both to be the only reality show about Indian-American people and having to showcase our culture?

VP: Obviously it’s an honor. I’m super proud to have this platform to showcase our Indian-American journey and showing how similar and dissimilar it is to other cultures. There’s so many non-Indians saying, our families are exactly like that! It’s cool to hear that it’s not just Indian-Americans that experience certain issues, but then there’s certain holidays, prayers and cultural aspects that are brand new to everybody. It should have happened a lot earlier, but I’m glad it’s here now and we can all be proud to be Indian. I don’t think that was always the case growing up, for me at least.

MV: The one thing that we’re very cognizant of is that we want to do the culture right. As much as we’re representing a small Indian community within Miami, which may be very different from the community in Texas or New York or Maryland, it’s also about explaining our culture and our traditions for the larger audience and making sure that we do it justice. I’ve always been very proud of my identity as an Indian woman. I was the girl that was packing dal chawal at lunch, wearing a lehenga on cultural day, and putting on a performance to a Bollywood song, and I was very proud to do it. I was never embarrassed. Now to be able to do it in front of millions of viewers is an honor. I just want to make sure that we do it right, because we’re such a beautiful culture and such a beautiful community. We’re so welcoming. We’re so hospitable. And I hope that we can have so many more people that weren’t familiar with our community open up to that.

What has been your favorite memory or experience from being on the show?

MV: Attending BravoCon was incredible. That was a moment for us where we actually felt it, like we’re on a Bravo show! Then, one of Vishal’s wedding events is on the beach and it was such a fun moment and fun time, so I can’t wait to watch that.

VP: Honestly, it’s being able to showcase my wedding. Being the first big fat Indian wedding on national TV and it’s the beginning of a new chapter for me and Richa.

What can you tell us about what’s coming this season?

MV: You’re going to see seven incredible journeys of seven incredible people. You’re going to see happy times, fun moments, raw and real moments where we don’t know what to do next and we are confused and are leaning on our friends for support. I have to say that every time we finish filming this journey, we also sit back and learn so much about ourselves. The biggest blessing of this process is seeing your growth as well, because our stories are real and they’re happening in real time.

VP: This season is gonna be the best season of Family Karma and it’s gonna be the best show on Bravo. You’re going to see two totally different Indian weddings: you’re gonna see the first gay Indian wedding [on TV] and see a big fat Indian wedding with me and Richa, and all the drama that arises in between those two events. Wedding planning is just awful, and you’re going to see all the families get involved and a lot of relationship drama. We’ll see if everyone survives.

Radhika Menon (@menonrad) is a TV-obsessed writer based in Los Angeles. Her work has appeared on Vulture, Teen Vogue, Paste Magazine, and more. At any given moment, she can ruminate at length over Friday Night Lights, the University of Michigan, and the perfect slice of pizza. You may call her Rad.