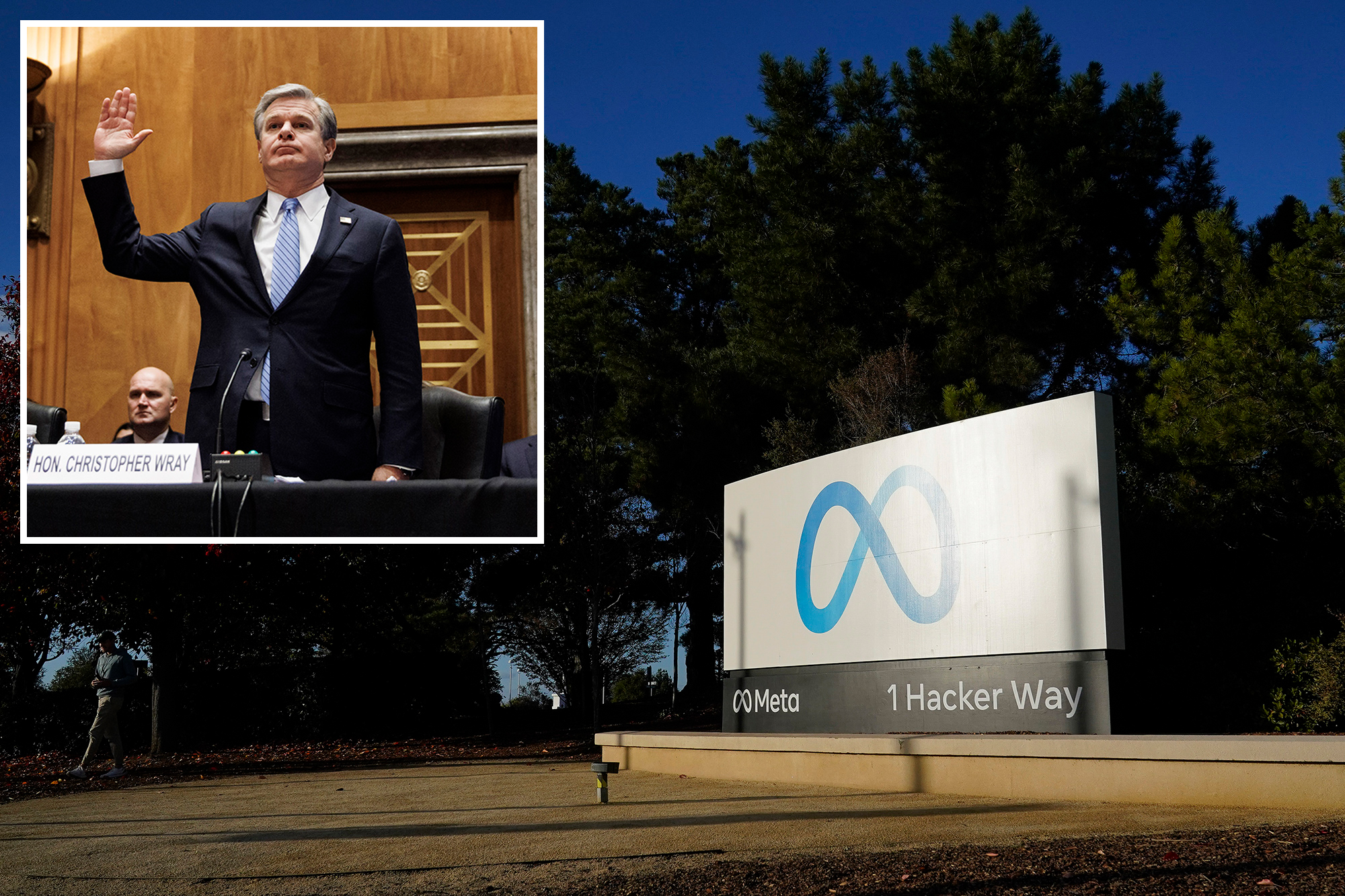 WASHINGTON — FBI Director Christopher Wray said Thursday he can’t “be sure” whether Facebook is sending the bureau user information without official requests — after a recent report alleged the social media giant is flagging up information with a “partisan” slant.

House Judiciary Committee Republicans claimed earlier this month that the FBI receives “private user information from Facebook, but without the user’s consent or the legal process the FBI would otherwise need to independently pursue such user-related information.”

Sen. Rand Paul (R-Ky.) asked Wray during a Senate Homeland Security Committee hearing about the alleged partnership — named in the House report, based in part on whistleblower claims of pro-Democratic bias within the FBI, as “Operation Bronze Griffin.”

“Is Facebook or any other social media company supplying private messages or data on American users that is not compelled by the government or the FBI?” Paul asked Wray.

“Not compelled — in other words, not in response to the legal process?” Wray replied.

“No warrant, no subpoena — they’re just supplying you information on their users?” Paul clarified.

“I don’t believe so. But I can’t sit here and be sure of that as I sit here,” Wray said.

A recent report alleged that Meta is flagging up information with a “partisan” slant.

“Can you give us a yes or no by going back to your team and asking?” Paul insisted. “Because it’s a very specific question because if they are, it’s against the law — the law, the Stored Communications Act, the Electronic Communications Privacy Act of 1986, prohibits providers from sharing electronic communications with any person or entity unless it’s compelled.

“This was done to protect the privacy of people, so we can feel like we can send an email or direct message to people without having that information given over.

“It’s a very specific question,” Paul continued. “Will you get with your team of lawyers and give us a specific answer? Because this is the law. If you’re doing it, then we need to go to court to prevent you from receiving this information.”

“Well, I can tell you that I’m quite confident we’re following the law,” Wray said. “But I will also follow up with you to make sure that we get more information, more detailed information.”

There’s some legal fuzziness when it comes to companies handing over user information due to various court rulings over the past decade on law enforcement collection of records voluntarily shared with companies.

Federal officials have been coy before about domestic surveillance operations.

Then-Director of National Intelligence James Clapper denied in March 2013 that the National Security Agency was collecting “any type of data at all on millions or hundreds of millions of Americans” when asked by Sen. Ron Wyden (D-Ore.).

The FBI would not confirm or deny the existence of Operation Bronze Griffin, but denied being politically biased in a statement earlier this month.

“Put quite simply: we follow the facts without regard for politics,” an FBI spokesperson told The Post. “While outside opinions and criticism often come with the job, we will continue to follow the facts wherever they lead, do things by the book, and speak through our work.”

Facebook spokesman Andy Stone, a former Democratic staffer who announced plans in 2020 to reduce distribution of The Post’s scoops on documents from Hunter Biden’s laptop, also declined to confirm or deny the existence of Operation Bronze Griffin following the House report.

“On whether [Operation Bronze Griffin] exists, I’d refer you to the FBI,” Stone said, adding: “Any suggestion we seek out peoples’ private information on a partisan basis to provide it to the FBI is false and there is zero evidence to support it.”

Separately, The Intercept on Oct. 31 exposed an online gateway through which authorities with a government or law enforcement email address reportedly can request the removal of “misinformation” from Facebook or Instagram.

White House press secretary Karine Jean-Pierre told The Post that West Wing staff don’t use the Facebook portal, even though her predecessor Jen Psaki said last year that the White House was “flagging” alleged misinformation to the company.

The Intercept reported that content flagged by the Department of Homeland Security through the portal included “parody accounts or accounts with virtually no followers or influence.”

Civil libertarians, including the American Civil Liberties Union, which has been accused of being too quiet about recent online censorship, blasted the Facebook portal as a probable violation of Americans’ free speech rights, tweeting, “The First Amendment bars the government from deciding for us what is true or false, online or anywhere.”