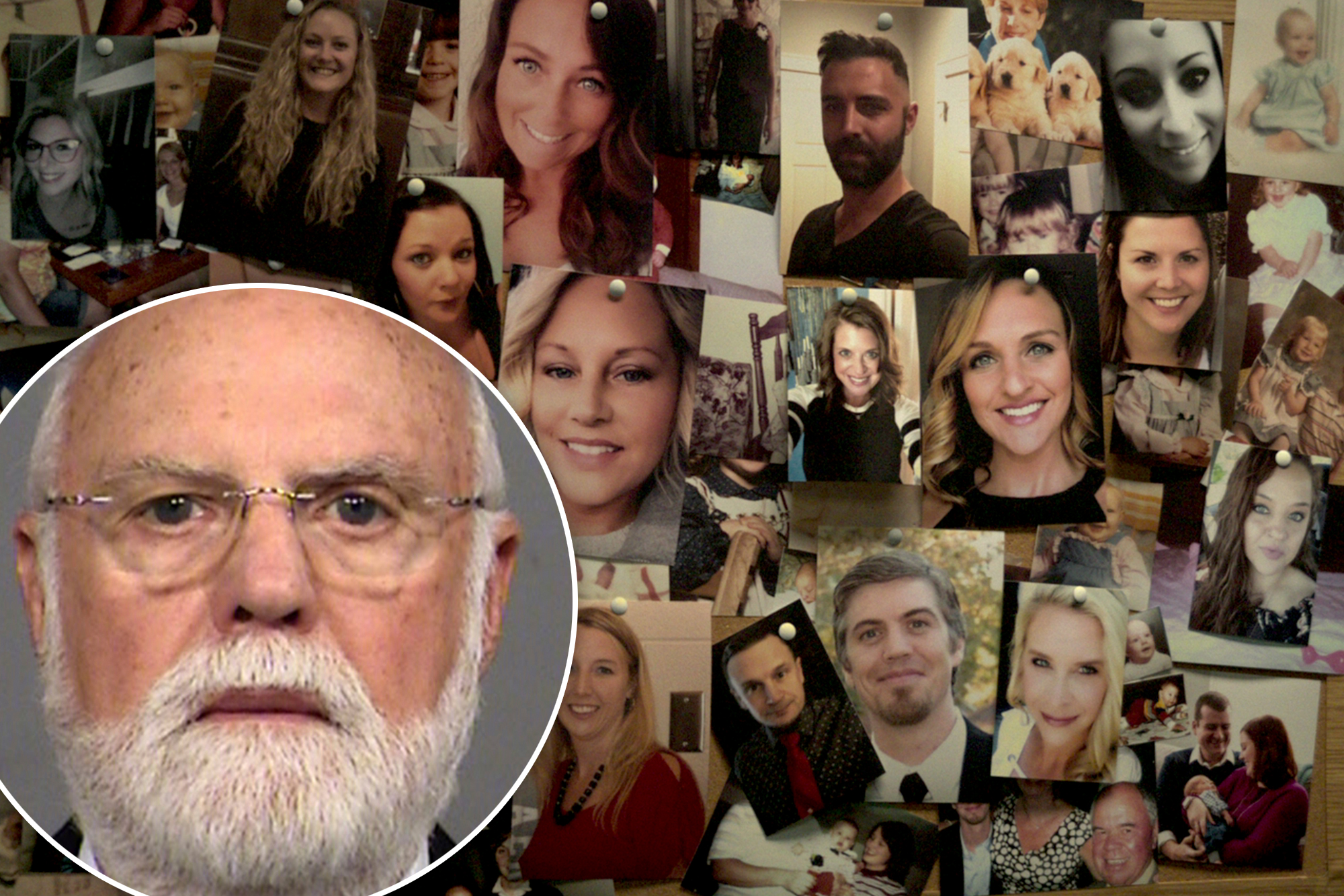 Growing up as an only child, Jacoba Ballard desperately wanted siblings.

In 2014, at 35, the Indiana native’s wish came true when she took a 23andMe DNA test and discovered that she had at least seven half brothers and sisters living within a 25-mile radius of her.

But Ballard’s lifelong dream of having a big family quickly warped as her half-sibling matches ballooned. Over the next eight years, she found a staggering 94 (and counting) fair-haired brothers and sisters — and one man at the root of their sordid family tree. They all shared a father, fertility doctor Donald Cline.

“It’s disgusting,” said Ballard, now 43, in new Netflix documentary, “Our Father,” out May 11. “It’s almost like we’re like this perfect Aryan clan … Most of us have blond hair and blue eyes.”

Ballard discovered that fertility doctor Donald Cline was her biological father after a police-issued DNA test proved her paternity. Netflix

In the film, directed by Lucie Jourdan of “Taken at Birth” fame, Ballard and a handful of her siblings theorize that breeding an all-white brood in an effort to preserve the Caucasian race may have been Cline’s motivation for wrongfully impregnating hordes of his patients with his own sperm.

“It’s disgusting to sit there and lay in bed at night, wondering if the person that created you is some racist bigot,” said Ballard of Cline, now 84. He retired in 2009, but carried out his transgressions from his Indianapolis offices during the late 1970s and early ‘80s without repercussions.

However, in 2016, Cline lied to investigators with the Indiana attorney general’s office, claiming he never used his own sperm to inseminate a patient. But, later that same year, a paternity test which was administered by a law enforcement agent with a warrant to collect his DNA sample confirmed a 99.99% chance that he’s Ballard’s biological father.

Cline did not respond to The Post’s request for a comment.

‘The best’ in the field

Cline initially lied to investigators about wrongfully inseminating his female infertility patients with his own sperm.

In 2017, after it was proven that Cline fathered Ballard, the doctor pleaded guilty to two counts of obstruction of justice for previously lying to officials about artificially inseminating patients with his own specimen. But, thanks to a sympathetic judge and a lack of criminal history, he ended up not serving any jail time and simply paying a $500 fine.

He couldn’t be criminally charged with rape or battery, explains former Marion County, Ind., prosecutor Tim Delaney in the doc, because, “At the end of the day, there’s just no crime that touches this particular act [in the eyes of the law],” he said.

Although Cline reigns as the “most prolific” US physician to wrongfully inseminate patients with his semen, he is hardly alone. With the growing popularity of at-home DNA test kits, an additional 44 fertility doctors nationwide have also been exposed for committing similar misdeeds.

Diana Kiesler (left) claims her husband was heartbroken to learn that Cline was the biological father of their daughter Julie Harmon (right). Netflix

“It was a violation of him into me,” said Diana Kiesler, whose daughter Julie is Cline’s biological child. In 1982, she had no clue that her infertility specialist — then lauded as one of “the best” in the field — had somehow discarded her husband’s sperm sample and used his own to impregnate her.

But years later, when a 23andMe match and a DNA test proved that her daughter and Ballard were blood relatives, and the truth of Cline’s trickery came out, it nearly destroyed Kiesler’s family.

“I [told my husband], ‘Unfortunately, Dr. Cline didn’t use your sperm, he used his own. So, we’re just now finding out that Julie is not yours,’” Kiesler recalled. Her devastated spouse howled, “He’s taken everything away from me.”

Ballard’s mother, Debbie Pierce, sought Cline’s help with getting pregnant in 1979, after it was determined that her husband couldn’t have children naturally. She allowed the physician to select what she thought would be a suitable donor’s sample for the insemination procedure.

“He told us that he would match us with a donor that looked like my husband,” said Pierce. “He was going to use medical students — their sperm.”

Pierce, along with the nurses and doctors on Cline’s staff, was under the impression that each donor’s specimen would only be used a maximum of three times.

Ballard launched a hunt for her half siblings, and connected with a number of them on 23AndMe. Netflix

That rule was meant to help avoid too many people in a geographical area sharing bloodlines. But years later, owing to Ballard’s initial 23andMe findings, it became clear that the rule had been broken.

“Finding out that I had siblings was amazing,” Ballard admitted. “But there’s eight of us, what’s going on here?”

After confirming that she and Harmon were half sisters, the pair connected with their half brother Matt White through the online biology database.

His mom Liz was unknowingly injected with Cline’s semen 15 times before she finally became pregnant.

“It’s just too f–ked up. I just felt bad for my mother,” said White. “I mean, here she was, this young woman just wanting to have a family like anyone else.”

In the film, Liz says when she learned that her son shared Cline’s DNA she felt like “I was raped 15 times and I didn’t even know it.”

Liz underwent several rounds of infertility treatments with Cline before getting pregnant with her son.

Unfortunately for White, Ballard and the rest of the clinician’s descendants, sickness, they claim, runs through Cline’s blood.

“He’s got autoimmune disease,” said Jason Hyatt, one of the disgraced doctor’s biological children. In the film, a former friend and colleague of Cline’s, Mark Farber, recalls overhearing that he’d suffered from rheumatoid arthritis in his hands since the ’70s.

“His sperm wouldn’t even have been allowed to be a donor because of that,” Hyatt said, noting the intense health screening most sperm donors undergo for any inheritable diseases or deficiencies.

Nearly all of the half siblings, including Ballard, are afflicted with chorionic autoimmune diseases. However, per audio of a recorded police interview with Cline in the doc, he claimed, “All of the inseminations that I did with my sample, and again it was sparingly, had a healthy baby.”

Cline is believed to have passed on a number of autoimmune diseases to the dozens of children he wrongfully fathered.

For Allison Kramer, 47, who also has health issues, it took a long time to accept that she and her twin sister were Cline’s children.

Even after taking a 23andMe DNA test and being matched as Ballard’s half sibling, Kramer couldn’t bring herself to believe that she was not the biological daughter of the man she grew up believing was her father, Cline’s pal Farber.

It wasn’t until seeing her half siblings share their stories on an episode of “Dr. Phil” in December 2019 that she was finally able to accept the truth.

But Cline’s wrongdoings, tragically, felt even more personal for Kramer.

“Don Cline was also my fertility doctor,” she tearfully confesses on camera. “He was my main GYN … He did my pap exams, he did breast exams.”

“I don’t think any grown woman wants someone closely related to them, a member of the opposite sex, to touch them in that way,” she adds.

And while Cline’s sins may have gone legally unpunished thus far, Ballard refuses to rest until justice is served.

Ballard has dedicated her life to fighting for justice against Cline. Netflix

With the help of her newfound family members and their moms, Ballard worked to successfully pass legislation in Indiana making illicit donor insemination illegal. There is no federal law against it.

“I’m a fighter,” Ballard says in the doc. “And I will fight for every sibling that I have that I know, that I don’t know, and for every woman you assaulted. And I will do this until the f–king day I die.”

House where Facebook was created lists for $5.3M
Reply to I can’t believe I’m posting me singing this song AGAIN LOL ...