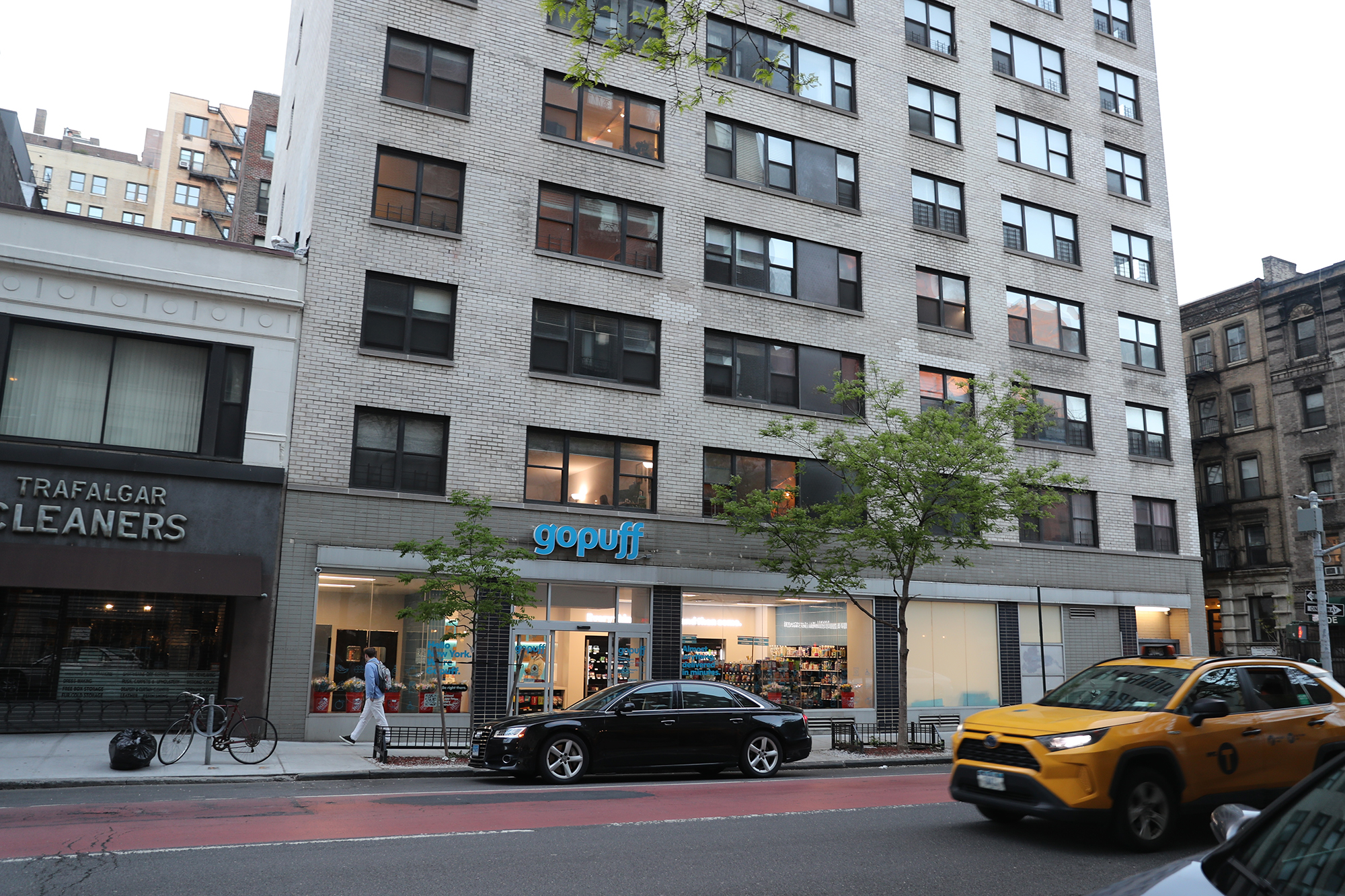 New Yorkers’ love-hate relationship with fast grocery delivery apps is becoming more heated as one of the biggest has begun using cars in addition to bicycles and scooters, The Post has learned.

Deep-pocketed startup Gopuff is on a hiring binge to recruit delivery workers who drive cars, even as surging congestion in the city slows traffic to a crawl — and some locals complain that idling and double-parked delivery cars are “ruining” their “quality of life.”

On the Upper East Side, Gopuff drivers regularly sit in their cars across the street from a Gopuff location on Lexington Avenue between East 89th and East 90th Streets for up to 30 minutes at a time, neighbors say.

The same unmarked cars repeatedly park in front of a residential building and stores while the drivers wait for packages to deliver — but the space is zoned for commercial vehicles to make stops and deliveries, neighbors complain. Cars picking up Gopuff goods don’t have the required commercial license plates, locals gripe.

The drivers also enter through the employee entrance of the store, indicating that they are not customers, neighbors say.

Gopuff told The Post that it does use cars for deliveries in the outer boroughs but said that “delivering orders by car in Manhattan is a violation of our stated expectations.”

Marco Botarelli, who lives across from the store at 1349 Lexington Ave., disputes Gopuff’s claim.

“They are loitering in their cars with their music playing,” Botarelli told The Post in reference to Gopuff drivers. “And there are never any spots for us if we need to park in front of our building for a few minutes.”

“They are loitering in their cars with their music playing,” Carnegie Hill resident Marco Botarelli griped about GopuffWilliam C. Lopez/NYPOST

Local business owners are also fed up with the situation.

“The plumbers, the food vendors and other trades workers who have proper plates can’t park in front of the businesses that they are servicing because of these cars,” said John Miklatek, who owns a health food store called Food Liberation on the block.

Gopuff told Menin it would review the car complaints.

Gopuff drivers are parking in commercial vehicle spaces despite not having the appropriate plates. William C. Lopez/NYPOST

“It’s important to Gopuff that we are good neighbors,” Gopuff said. “This includes listening to and working with our neighbors to address any concerns they may have — something we regularly do.”

Menin has submitted a legislative request to regulate the industry via the Department of Consumer Affairs, which would issue licenses to these businesses.

“You can’t have unlicensed cars that take over a block and neighborhoods without any regulation,” Menin told The Post.

The news comes after months of complaints from neighbors and local politicos about delivery workers on electric bikes and scooters flouting traffic laws, as reported by The Post. Menin said that she and her three-year-old daughter were nearly run over by a delivery driver riding a moped on the sidewalk.

Gopuff’s previously unreported use of cars in New York City has been so under the radar that even one of the industry’s biggest critics, City Councilmember Gale Brewer, was unaware that it was using drivers.

“If Gopuff is using cars for deliveries, they are exacerbating congestion and pollution,” Brewer told The Post, accusing Gopuff and other startups of “coming into town upending local laws and extracting what they can from our neighborhoods.”

Over the past week, Gopuff has posted listings across online job boards for delivery drivers, including in specific New York neighborhoods such as Manhattan’s Lower East Side, NoHo, Upper West Side and Seaport, as well as Brooklyn, the Bronx and Queens.

Gopuff insisted to The Post that it’s not actually hiring drivers in Manhattan and that the ads were meant to attract bike couriers.

Gopuff offers fast delivery of groceries and other household items. Courtesy of Gopuff

The listings say that drivers must be at least 21 years old and have their own vehicles with proof of insurance.

Fellow grocery delivery apps Gorillas, Getir and Jokr all confirmed to The Post that they never use cars for deliveries in New York.

Sarah Kaufman, a transit expert and professor at New York University’s Rudin Center for Transportation, said she was baffled by the decision to use cars for deliveries in traffic-clogged Manhattan.

“I’m frankly surprised that they find it more efficient to use a car, especially in Manhattan, than to use other modes of transport because I imagine they’re spending much of that time sitting in traffic,” Kaufman told The Post. “Adding cars to New York City streets is the last thing we want to do right now, so I’m disappointed to hear that that is happening.”

But Brittain Ladd, a retail consultant who has worked with rapid delivery companies including Gopuff, said that switching to car deliveries could make sense to help the company cut costs amid pressure from investors.

While distributing several orders with one driver will likely raise delivery times for Gopuff customers, especially in ultra-congested neighborhoods like the Lower East Side, Ladd said that making several deliveries out of one vehicle means lower labor costs. A single driver can handle several deliveries at the same time, while bike couriers are more limited in what they can carry, according to Ladd.

“The model is broken,” the consultant said in reference to delivery apps that rely on bike and scooter couriers. “Gopuff is simply experimenting with changing the model in an attempt to reduce their costs.”

“Gopuff is simply experimenting with changing the model in an attempt to reduce their costs,” retail consultant Brittain Ladd said. William C. Lopez/NYPOST

Gopuff’s shift to drivers comes weeks after the company laid off hundreds of employees in an attempt to cut costs amid an economic slump that’s making it difficult for unprofitable tech firms to raise money.

Similar publicly traded companies like Doordash and Grubhub parent Just Eat Takeaway have seen their stock prices collapse by 55% or more so far this year, raising the pressure on private delivery apps like Gopuff to justify their valuations. The shift to drivers may be designed to help placate “impatient” investors who want the company to cut additional costs, Ladd said.

Gopuff previously raised money at a $15 billion valuation in July 2021 but has since seen its valuation on the secondary market tank, The Post exclusively reported in March.