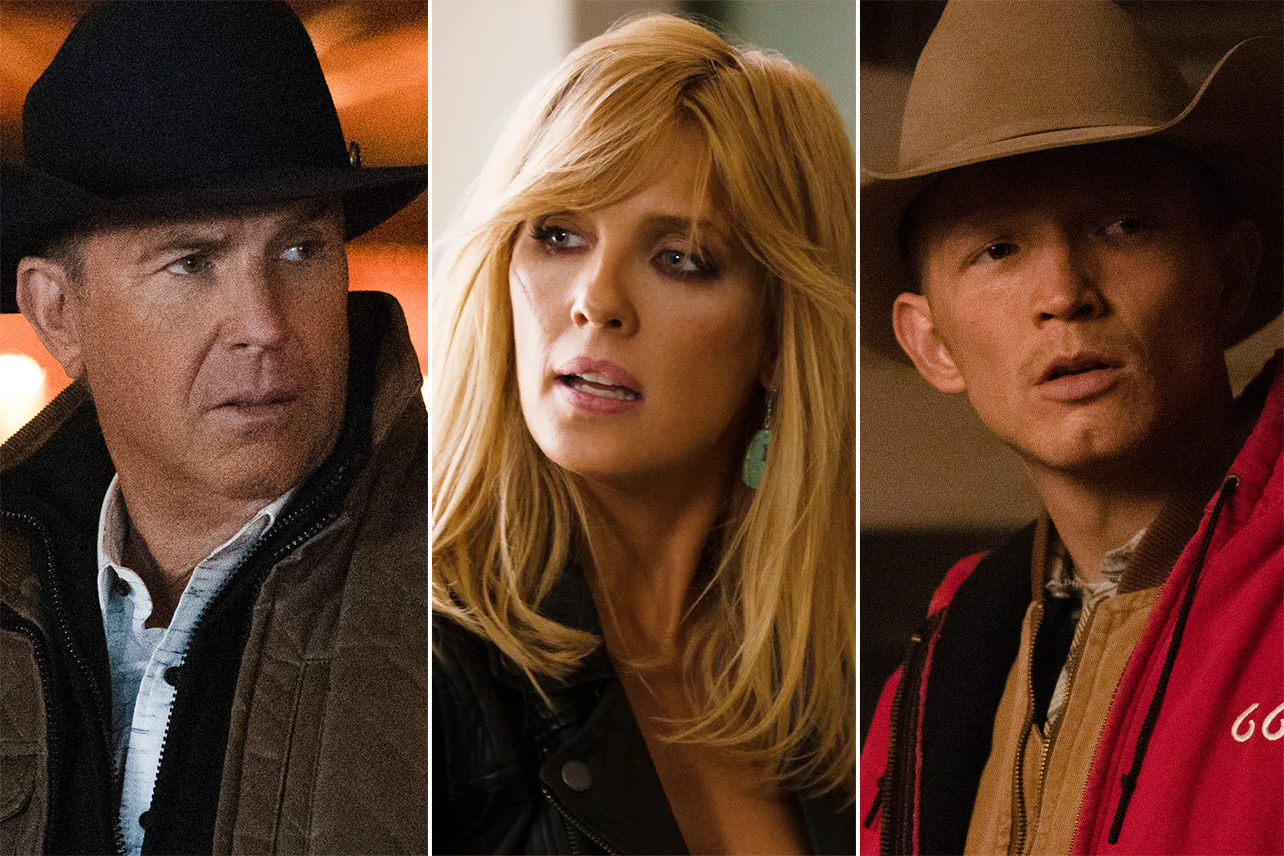 Yellowstone Season 4 Episode 10, entitled “Grass On The Streets and Weeds on the Rooftops,”The Duttons are at crossroads. This episode is written by Taylor Sheridan, series co-creator, and directed Stephen Kay. It opens with Beth (Kelly Reilly), making peace with John (Kevin Costner), with some gentle counsel from Rip Cole Hauser. Beth’s many other issues are far from resolved, however. She rips out Carter’s (Finn Little) heart by rejecting him after he calls her “Mama” (“I’m nobody’s mother ever, got it?”), and she pursues her plan to call on Terrell Riggins (Bruno Amato) in prison.

Elsewhere, things are also rocky for John’s favorite protestor, Summer Higgins (Piper Perabo). John makes good on his promise to speak to Judge Mitchell Davis on Summer’s behalf, but Davis is unmoved. Davis is the final judge, even though her legal team reached a plea agreement with Davis for a 15-year suspended sentence. He sentenced her to more than 37 year imprisonment (! For her various charges. Summer will continue to be scrutinized, even though John is able to get Davis to drop the felony assault charges. “8 months of hell” behind bars before she’ll be eligible for parole.

After being fired by Market Equites CEO Caroline Warner, (Jacki Weber), Beth pretends to be a hooker to visit Riggins at prison. He reveals that Jamie (Wes Bentley) came to see him and that’s all Beth needs to hear. She kidnaps a priest on her way home and demands that he perform a quickie Yellowstone wedding for her and Rip, with John Carter, Lloyd, and Lloyd as witnesses. With her affairs in order, Beth confronts Jamie with her knowledge of his failure to act when he learned who was responsible for the attacks on the Duttons—his biological father, Garrett (Will Patton). Jamie, who is in a state of collapse, is given an ultimatum by Beth: Jamie must kill Garrett (Will Patton), if he wants his life to continue and he wants the title of attorney general. He does.

Meanwhile, Jimmy (Jefferson White) returns to the Yellowstone… with new fiancée Emily (Kathryn Kelly) in tow. Naturally, this does not go down well for Jimmy’s ex-girlfriend Mia (Eden Brolin), who is back at the bunkhouse for poker night. After a physical and verbal brawl between the women, Jimmy gets John’s blessing to return to the Four Sixes if that’s what he wants. After sharing a tender moment of affection with Lloyd (Forrie J.Smith), and impressing the ranch workers with his new roping skills and techniques, Jimmy bids farewell to his former home to say hello to his future in Texas and Emily (and his own Yellowstone spinoff series). Mia can only watch as they leave. It’s a rather cruel ending for the barrel racer, but hopefully we haven’t seen the last of her.

Finally, peppered throughout the episode are vignettes of Kayce’s vision quest. These include hallucinations of his dead brother Lee (Dave Annabelle), Avery(Tanaya Beatty), an old military unit, and an Indigenous lady (Robin Dear Towner). Kayce is shaken by the visions and returns to Monica (Kelsey Asbille), transformed.

Let’s break down the 5 most important moments from the Season 4 finale that will have repercussions in a potential Season 5 since it is more than likely that Paramount Network will choose to renew the show.

Beth knew her stay at Market Equities was going to be short, but she assumed it would be on the terms of her choice. What we learn is that Caroline was well aware of Beth’s intrigue and intended all along to get rid of her. She tells Beth: “I gave you enough rope to hang yourself and oh boy did you fucking hang yourself.”She continues: “You have violated everything. From the terms of your contract to your NDA; you have committed corporate espionage.” While Beth remains steely, there is a glint –just a glint—of fear in her eyes as Caroline lays into her.

Caroline then makes a chilling pledge to Beth: “I’m going to put a public restroom where your fucking house is. I am going to chop down every tree and dam every creek. I am going to rape your fucking ranch to death. And you, you little bitch, are going to prison. Needless to say, you’re fired.” Beth takes note of Caroline Warner’s threats and goes on to deal with other problems, but we suspect that her war with Market Equities will continue.

Man, oh man, Montanans really don’t like Summer Higgins and what she stands for. Judge Mitchell Davis describes her coldly to John as an environmental terrorist, and points out her 42 arrests in over a dozen states. Davis addresses Summer later in the courtroom. “I am not swayed by your education or your outreach to the community. In fact, the opposite. You know better. If you wish to change laws, run for office or vote for those who wish to change them as well. I look at your file and I see a career criminal.”

Davis, despite the plea agreement, imposes the most severe punishment for each of Summer’s charges, sending her to more than 37 year imprisonment. John demands that Davis be released from his chambers. “show some goddamn mercy”The felony assault charges were suspended and the trespass charge was reduced to one year. David listens to Summer’s plight, but laments that Summer will be released after only eight months. We’ll have to wait and see how prison affects Summer going forward.

With John’s prized stallion Metallic Cat and his new fiancée in tow, Jimmy makes his triumphant return to the Yellowstone…only to be greeted with a punch by his former girlfriend, Mia. Jimmy and Mia fight after Emily beats Mia to death. Jimmy is shamed by Mia watching. “You didn’t fight. Not even a little.”She is 100% correct. Jimmy clearly needs a fresh start following these mistakes. John gives his blessing to leave Yellowstone, happy with the cowboy that he is.

Jimmy and Lloyd then have a heart to hearts. Jimmy points out the following: “No, it’s hard to do here. This job’s hard enough without fighting the whole world for the right to do it. In Texas, I’m not fighting a neighbor to do my job because he’s got the same job. So does his neighbor. Just cattle and cowboys all the way to the horizon.”Jimmy has now made it clear that he is determined to see the end of Yellowstone. Rest assured that Jimmy’s journey will continue in the upcoming spinoff series.

It wouldn’t be a season finale without Beth and Jamie fighting, would it? Knowing that Garrett was responsible for the attacks on the Duttons, Beth gives Jamie 2 options: option 1, she’ll tell John, he’ll call the Governor, Garrett and Jamie will be arrested, Garrett will promptly throw Jamie under the bus for an immunity deal, and Jamie will be charged with 3 counts of attempted murder and spend the rest of his life in prison; or, option 2, she’ll tell Rip what Garrett did and the truth about why she can’t have children, and then he’ll kill Jamie. Jamie begs for mercy, and she offers him a third option: to kill Garrett.

Jamie approaches Garrett as he sits peacefully on his son’s ranch. He tells Jamie that Garrett is his son. “Those Duttons are going to always use your fear against you. If I can ever teach you to be fearless, then you would truly have the world licked.”Garrett continues his story, feeling that his death is imminent. “I’m 61 years old and these last few months made all the 61 years of fucking hell I endured worth it. Don’t you let those fucking Duttons deceive you into thinking you’re a bad man. You’re a good man, son, and I love you.”Jamie shoots him in his back. It’s truly a shocking moment and puts Jamie firmly under Beth’s control going forward, especially after that blackmail photo she took of Jamie getting rid of Garrett’s body.

Kayce began his vision quest after he was able to secure himself in the Mo Brings Lots Plenty prayer circle. Kayce’s first vision is of Lee, his deceased brother. Kayce is irritated. “You’re not doing what he asked. He said pray for a vision, but I don’t see you praying. What are you doing here? Do you need help? How can I help you?” When Kayce tells Lee he can’t let him into his prayer circle, Lee begins to bleed from the mouth, screaming, “Let me in, you fucking child! This is your vision. This is your destiny.”Kayce was warned by Mo that a coyote might try tricking him. Kayce isn’t bothered but remains firm, even though Avery tries to seduce Kayce.

Kayce dreams of his military unit in combat. Kayce next meets an Indigenous woman, who offers two alternatives to his future. He asks her to help him choose the right path, but she responds, “I can help you walk the path, but you must choose it.”He is shocked but determined to return home to Monica. Monica then asks him about what he saw. Kayce says it cryptically “I saw the end of us.”Is he referring either to their marriage, the Duttons, or Yellowstone itself? Taylor Sheridan, we need answers!

Where to stream Yellowstone