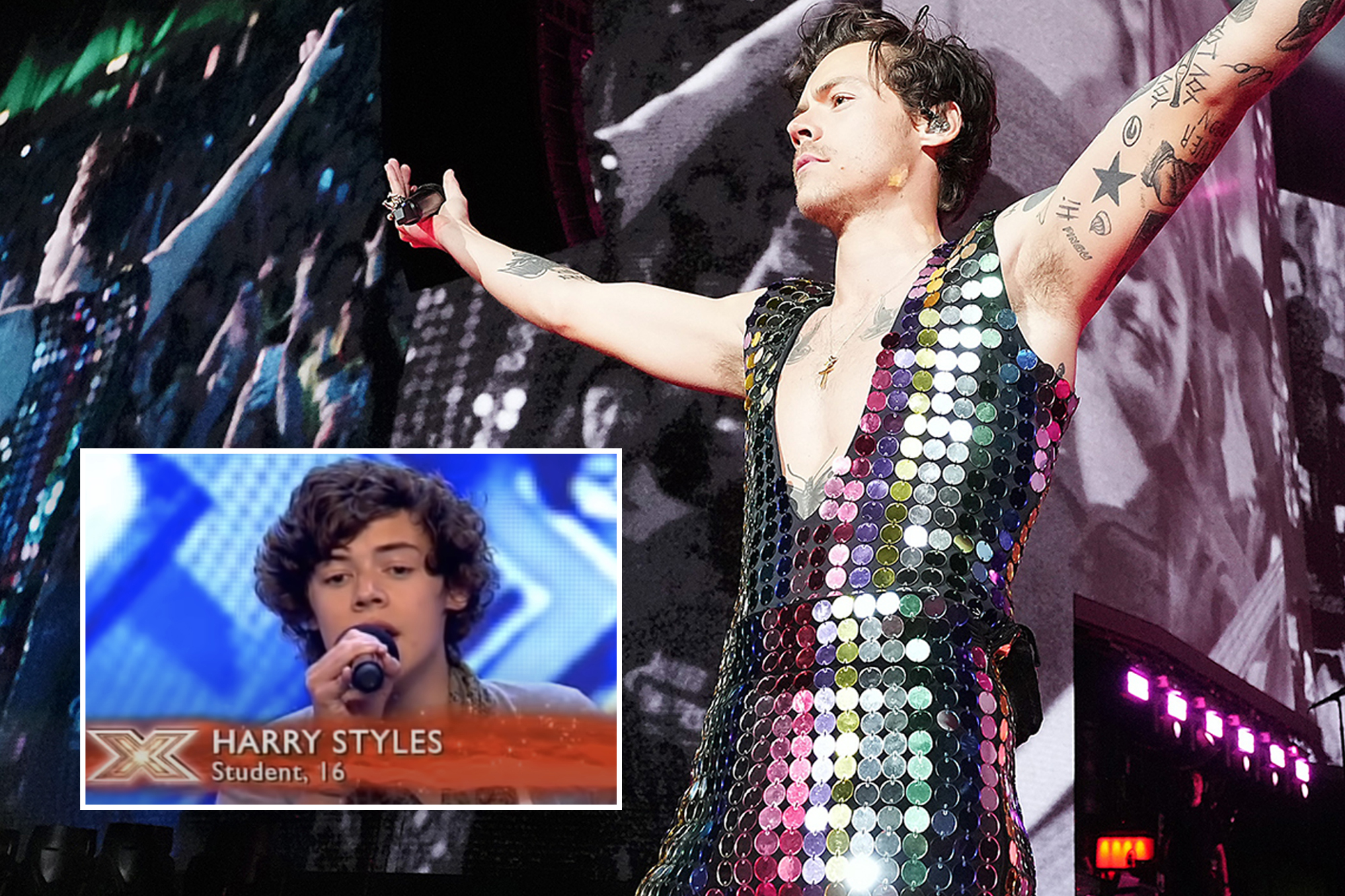 Long before Harry Styles reached the sweetest of career highs with his No. 1 single “Watermelon Sugar” in 2020, a judge on Britain’s “The X Factor” was sour on the future pop superstar.

After the then-16-year-old bakery worker crooned Stevie Wonder’s “Isn’t She Lovely” a cappella during his 2010 audition, he was unceremoniously shot down by music manager Louis Walsh. “I think you’re so young, I don’t think you have enough experience or confidence yet,” he said to a scarf-draped Styles.

But the other two judges — Nicole Scherzinger and, especially, Simon Cowell — saw something special in the young singer and voted him through to the next round. And Cowell would go on to pair Styles with four other contestants on “X Factor” to form One Direction.

Harry Styles headlined the first of his two nights at this year’s Coachella rocking a sequined jumpsuit.Getty Images for Coachella

Since then, the only direction has been up for the floppy-haired lad from Cheshire, England, who went from being the boy band’s biggest heartthrob to a Grammy-winning solo sensation, who, on Friday, headlined his second of two weekends at Coachella 2022. And with his new No. 1 single “As It Was” heating up anticipation for his third solo album, “Harry’s House” (out May 20), Styles’ career is on fire.

“He really has become one of the biggest artists of this generation,” said Tom Poleman, chief programming officer and president of national programming for iHeartMedia. “He’s the concert that everybody wants to see, he’s the music that everybody wants to hear on the radio, and then he’s also the artist everyone wants to follow on social. He’s up to 81 million followers between Twitter and Instagram alone. Those are mega-star numbers.”

Certainly, headlining one of the biggest, buzziest music festivals on the planet felt like a crowning moment for the new prince of pop. “He’s got to be the first person who came to fame because of a reality show to headline Coachella,” said Lyndsey Parker, host of SiriusXM’s “Volume West,” who was among those in the Indio, California, desert to witness Styles in all his glittery glory on April 21. “He made a grand entrance wearing this fun-fur coat … and underneath he had that sequined Freddie Mercury jumpsuit, which not every guy could carry off. He absolutely did.”

At 28, Styles has found that swagger — and a contagious sense of freedom — along his journey from boy-bander to rock god. “Now,” as he told Rolling Stone in 2019, “I feel like the fans have given me an environment to be myself and grow up and create this safe space to learn and make mistakes.”

After singing as a child on a karaoke machine that his grandfather gave him — the first song that he recorded was Elvis Presley’s “The Girl of My Best Friend” — Styles was the lead vocalist in local band White Eskimo when he auditioned for “X Factor.” And he even came up with the name for One Direction, which Cowell signed to his Syco Music label after the then-newly formed group finished third on “X Factor.”

Harry Styles performing at the 2021 Grammys, where he won his first Grammy for “Watermelon Sugar.”Getty Images for The Recording A

After the One Direction phenomenon took off with the global smash hit “What Makes You Beautiful” in 2011, Styles emerged as a fan favorite in the group — but he wasn’t exactly the Justin Timberlake of 1D who seemed destined for solo stardom. “When you look at certain groups, like Destiny’s Child, it’s really no question who the standout star is,” said “MTV Fresh Out Live” host Jamila Mustafa, referencing Beyoncé’s former girl group. “But I believe that pushed Harry Styles.”

In fact, Zayn Malik was the first member of One Direction to go solo after quitting the group in 2015. But after 1D went on hiatus in 2016, it was Styles who rocked the music world when he released the Bowie-esque “Sign of the Times” in 2017, revealing more depth and an edgier sensibility than anyone was expecting.

Harry Styles (center) and One Direction exploded with 2011’s “What Makes You Beautiful.”Sony Music

“When ‘Sign of the Times’ came out, I thought that was such a great, great first [solo] single because … it really was like a gauntlet thrown down, like, ‘OK, this is the new me,’” said Parker of the hit ballad, which Rolling Stone ranked No. 428 on the 500 Greatest Songs of All Time in 2021.

Indeed, Styles’ 2017 self-titled solo debut showed that he had learned well from classic-rock heroes such as Van Morrison and Fleetwood Mac. And all of a sudden, he had not only artistic cred, but cross-generational appeal, too.

“The new generation as well as their parents could connect with Harry,” said Poleman. “And that’s always been the definition of true mass-appeal artists — when you can span generations. And he did it masterfully.”

Harry Styles (center) getting in hair formation with One Direction in 2012.Getty Images

Debunking the sophomore slump, Styles built on that success with his second album, 2019’s “Fine Line,” which — incorporating more soulful sounds on hits such as “Lights Up,” “Adore You” and, of course, “Watermelon Sugar” — went triple-platinum and won him his first Grammy.

Meanwhile, some older music legends have been watching — and worshiping— Styles too. In fact, Stevie Nicks — who has called Styles “the son I never had” — had him induct her into the Rock and Roll Hall of Fame in 2019. And country-pop queen Shania Twain came out to to perform with him at Coachella.

“Talent appreciates talent, and they can recognize it,” said Poleman. “Clearly, they see it in Harry.”

And while Parker agrees that Styles is “the real deal” as a musician, she says that his retro, Gucci-rocking style also invites comparison to some all-time greats. “He’s got that Mick Jagger thing; he’s got that Bowie thing,” she said.

Indeed, Styles’ gender-bending brand of thrift-store couture saw him wearing a dress as the first man to appear solo on the cover of American Vogue for the magazine’s December 2020 issue. Meanwhile, he’s been a rainbow-flag-waving advocate for the LGBTQ community, famously helping one of his young female fans to come out to her mom at a concert in 2018.

Harry Styles with current flame Olivia Wilde, with whom he will star in the upcoming thriller “Don’t Worry Darling.”Terma,SL / BACKGRID

And although he’s dated models such as Kendall Jenner, Nadine Leopold and Camille Rowe — as well as Taylor Swift back in his 1D days — he doesn’t have that bad-boy image as a player. “I think he’s a gentleman,” said Mustafa.

In addition to the upcoming release of “Harry’s House,” the title of which nods to a Joni Mitchell song, Styles will co-star with current flame Olivia Wilde — 10 years his senior — in this fall’s thriller “Don’t Worry Darling.” But even as his career is “defying gravity,” as Poleman puts it, he hasn’t forgotten his roots in One Direction — and, refreshingly, he remembers them fondly.

“When somebody gets out of a band, they go, ‘That wasn’t me. I was held back,’” Styles told Rolling Stone. “But it was me. And I don’t feel like I was held back at all. It was so much fun … It’s not like I was tied to a radiator.”

AI ‘brings dead back to life’ by animating old photos
I help companies write better job postings. Here's how to improve yours.