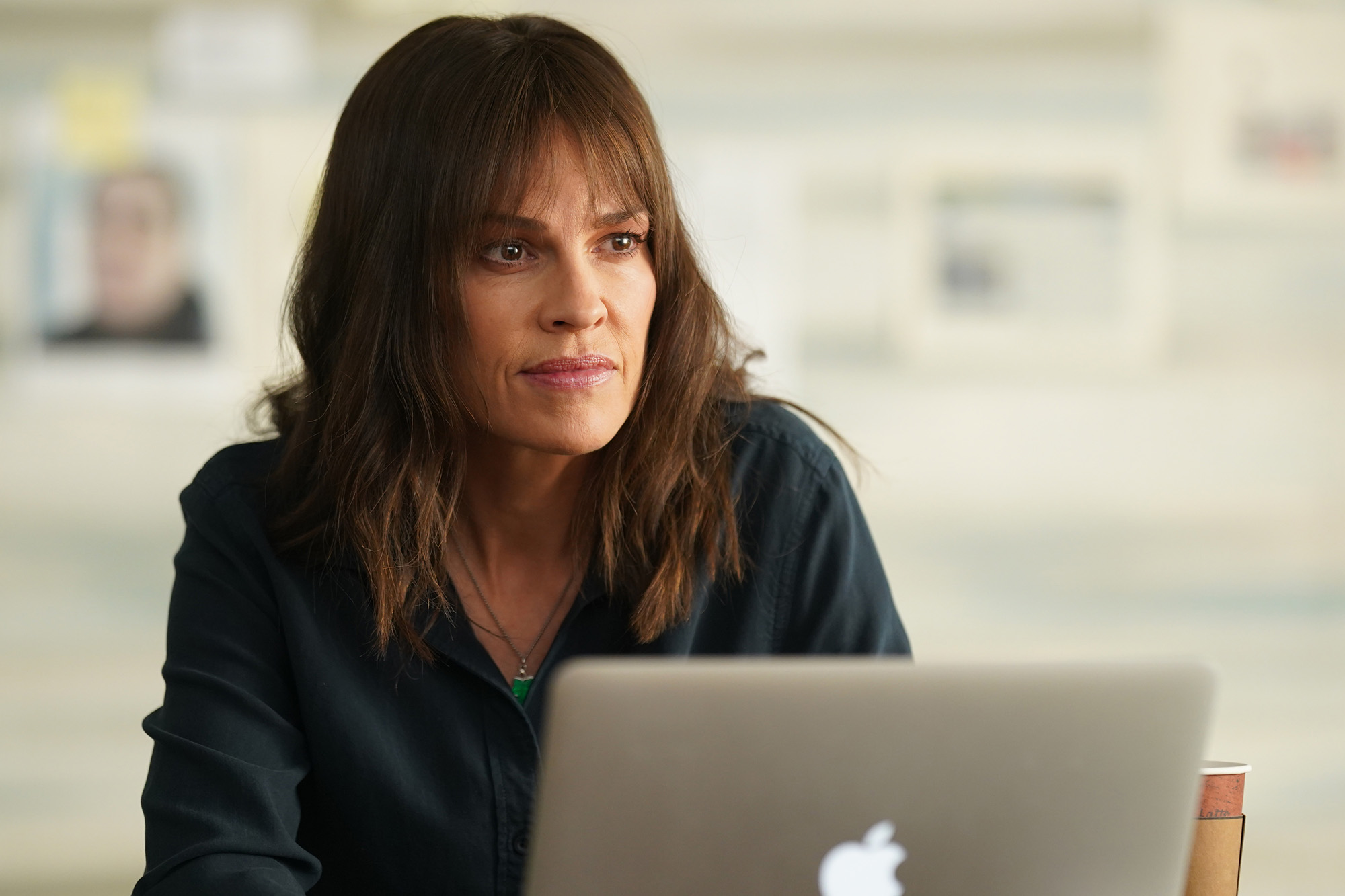 Swank, 48, plays Eileen Fitzgerald, an abrasive, hard-charging investigative reporter for the (fictional) New York City newspaper The Vanguard. She’s digging into a five-star general who’s under consideration as the country’s next Secretary of Defense. Elizabeth is convinced he’s involved in illegal international arms deals and her one trusted source gives her incriminating information to back that up — with one huge problem: the general and his team claim the documents are forged. The Vanguard “re-reports” (weird terminology) the story and Eileen quits in a self-righteous fury — just as stories of her alleged bullying several of the paper’s female staffers are brought to light. She attributes it to “woke wussies” and cancel culture (a tip of the editorial cap to topicality); cut to four months later and she’s writing a book about the general in her ridiculously large, plush apartment with way too many panoramic views of Manhattan.

That’s where she’s visited by her old newspaper colleague, crusty Stanley Kornick (Jeff Perry, Cyrus from “Scandal”). They had a falling out 17 years earlier but he’s here now, rumpled and in her Architectural Digest-type digs, to offer her a job at the Daily Alaskan, the state’s largest newspaper where he’s editor-in-chief.

(“For what it’s worth, we need good reporting in the minor leagues, too,” he tells her. The paper downsized to a strip-mall location.)

Cut to Elizabeth on a plane bound for Anchorage as the paper’s new star reporter. Her fierce, take-no-prisoners, rubbing-everyone-the-wrong-way facade is dented a bit when she suffers a mid-flight panic attack — see, she is vulnerable — but by Day One in her Anchorage hotel room she’s already plastered the wall with photos of the indigenous women whose disappearances she’s now investigating … and immediately clashes with her new colleagues (pushy New York City reporter and all that, but you know they will eventually bond).

“Alaska Daily,” which is based on a ProPublica/ Anchorage Daily News investigation has the potential to catch on with viewers for a weekly subscription if it can muzzle its high-and-mighty tone starting with Swank, who’s an executive producer (the pilot was written and directed by Oscar-winning “Spotlight” screenwriter Tom McCarthy, who knows a thing or two about investigative reporting). It tries too hard, initially, and, with time could find its groove, since its heart is in the right place. Swank is surrounded by an appealing supporting cast — including Matt Malloy, Meredith Holzman, Grace Dove and Pablo Castelblanco — and Perry, who, unencumbered by the … Halting … Dialogue … Delivery … that plagued every major character on “Scandal,” steps nicely into his comfortable-shoe role.

Apple suppliers add factories in California, other US states
The first book in the world was made in ancient Mesopotamia and was called The Epic of Gilgamesh.