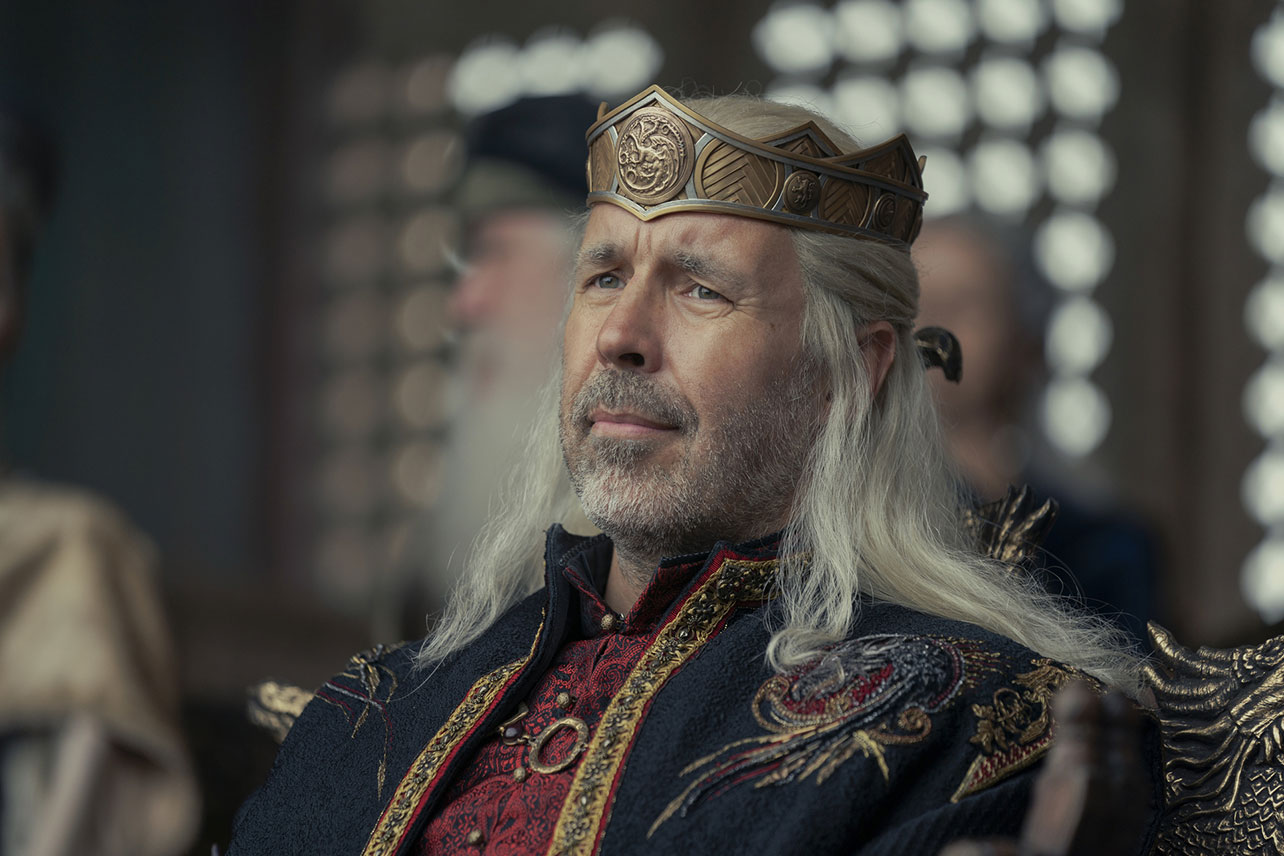 Welcome back to Westeros, and King’s Landing, where 200 years in the future will see a war for control of the Iron Throne on Game of Thrones. Here, now, it’s House Targaryen that’s ruled for hundreds of years, and King Viserys I (Paddy Considine) is in the ninth year of his reign; and this isn’t Game of Thrones, it’s HBO‘s prequel, House of the Dragon. Different shows, same old Westeros.

Viserys, wise but also easygoing, sports the locks of pale straw common to the Targaryen line. He’s also hyped about the upcoming tourney, where jousts and games of chance will celebrate the impending birth of what he has no doubt will be a boy, thereby ensuring his line of succession. His wife, the queen consort Aemma Arryn (Sian Brooke), reminds him of her history of difficult pregnancies. And Mellos (David Horovitch) can consult as many moon charts as he wants, but a Grand Maester can’t predict the sex of infant. Still, Viserys is undeterred as he leads a meeting of his council, which includes Hand of the King Ser Otto Hightower (Rhys Ifans), master mariner and head of House Velaryon Lord Corlys (Steve Toussaint) – his wife, Princess Rhaenys Targaryen (Eve Best), is known as the “Queen Who Never Was,” because she was passed over for rule in favor of Viserys – and Daemon (Matt Smith), the king’s impulsive and angry brother. The mutual hostility between Daemon and Hightower is enough to melt the marble council table.

For Princess Rhaenyra (Emma D’Arcy), life as a Targaryen revolves mostly around her status as a proud dragonrider. Surging through the cumulus above King’s Landing, she brings her golden mount Syrax in for a landing outside the dragon pens, which resemble airplane hangars built into a mountainside, their ribs of stone descending into the gloom. Queen Aemma says their “royal wombs” are how Targaryen women serve the realm, but to that Rhaenyra is mostly like “nah.” She listens intently in the King’s council room as she refills wine goblets, all the men jockeying and preening for the attention of Viserys. And what about her studies, asks her best pal, Lady Alicent Hightower (Olivia Cooke)? What about the histories their Septa assigned for reading? “Fuck the Septa.” Princess Rhaenyra’s independent streak is wider than a dragon’s wingspan.

Draped across the Iron Throne that he already considers more or less his, Daemon gifts Rhaenyra with a beautiful necklace forged from Valyrian steel. It’s a nice moment. But then he rallies his city guard in their combat armor and sweeping capes – “Beginning tonight, King’s Landing will learn to fear the color gold!” – and leads a brutal sweep into the streets and hilly corners, collecting criminals and anyone who it’s decided looks like one into the public square. Scrotums are sliced, hands are hacked, and heads are lopped off at the neck, and the dismembered lot gets carted away for dragon food. The council is aghast at Daemon’s methods, especially Hightower with his ax to grind. But Daemon just wipes some errant blood from his chin. “Much of King’s Landing is seen by the smallfolk as lawless,” he says, and with the tourney coming up, a show of force was necessary.

The tourney begins with King Viserys’s proclamation that Queen Aemma has begun her labors, and as the jousts commence we’re treated to some visceral “lance cam” POV as the knights in their riding armor emulate the clash of heavy cavalry that Rhaenys notes to Corlys none of these peacetime warriors have ever done for real. Still, one participant stands out, and that’s the dashing Dornishman Ser Criston Cole (Fabien Frankel). Besting two Baratheons and eventually Prince Daemon – Daemon, dude, don’t gloat before you’ve fully beat your opponent and tossed his mace and chain from the field – Ser Criston asks for the favor of Princess Rhaenyra, whose tourney finery features a lace neckline that emulates dragons’ wings. She indulges him as tragedy befalls the king, the queen, and the realm.

With the baby refusing to turn and Queen Aemma in immense pain, the Maester in charge has recommended a technique taught at the Citadel, and King Velaryon tearfully agrees. But Aemma doesn’t survive the Cesarean section, and neither does the baby.

“I wonder if, during those few hours my brother lived, my father finally found happiness,” Princess Rhaenyra wonders to Prince Daemon at the funeral ceremony. They speak in High Valyrian.

“Your father needs you more now than ever.”

Later, at a brothel and surrounded by a rash of his city guardsmen, Daemon raises his flagon. “King and council have long rued my position as next in line for the throne.” And he toasts to Viserys’s dead infant son, “the heir for a day.” But once Hightower blabs about this scene and his callous comments to said king and council, it’s curtains for Daemon’s chances. “You chose to celebrate your own rise!” the king shouts. “I have decided to name a new heir.” And Princess Rhaenyra dons a ceremonial cowl and her woven necklace of Valyrian steel to receive the fealty of all the great houses, and lords on bended knee. When it is time, she will become the first queen of the Seven Kingdoms. And Prince Daemon, for his part, is banished back to Runestone, where the lady wife he loathes lives. But as he prepares for departure on Caraxes, the dragon known as Blood Wyrm, he’s joined by Mysaria (Sonoya Mizuno), the woman of the pleasure houses who’s become his confidante.

In his hopes for a male heir, a son, the king neglected his daughter. But in time and tragedy, and in turn with Daemon’s unbecoming rage and deceit, Viserys came to understand that Rhaenyra was always the right woman for the job. Standing before a massive dragon skull memorialized over an eternal flame of candlelight, the king imparts to his chosen heir a dream – a prophecy, really – of a terrifying years-long winter to come. He calls it “the song of ice and fire,” and says it’s any ruling Targaryen’s duty to prepare for this event and protect the realm. Finally, with a gesture toward the skull, Viserys asks the princess what she sees in the creatures. “Us,” Rhaenyra answers, for the dragons are the source of Targaryen power. The king nods, pleased with his daughter’s humility and wisdom. “The idea that we control the dragons is an illusion. They are a power man should never have trifled with.” And for any Targaryen to rule – as king or queen – that must always be understood. They are the House of the Dragon. But the dragons will always be dragons. Welcome back to the game of thrones.

Johnny Loftus is an independent writer and editor living at large in Chicagoland. His work has appeared in The Village Voice, All Music Guide, Pitchfork Media, and Nicki Swift. Follow him on Twitter: @glennganges

What it means and what you need to do
Coldest Moments Part 2 ...