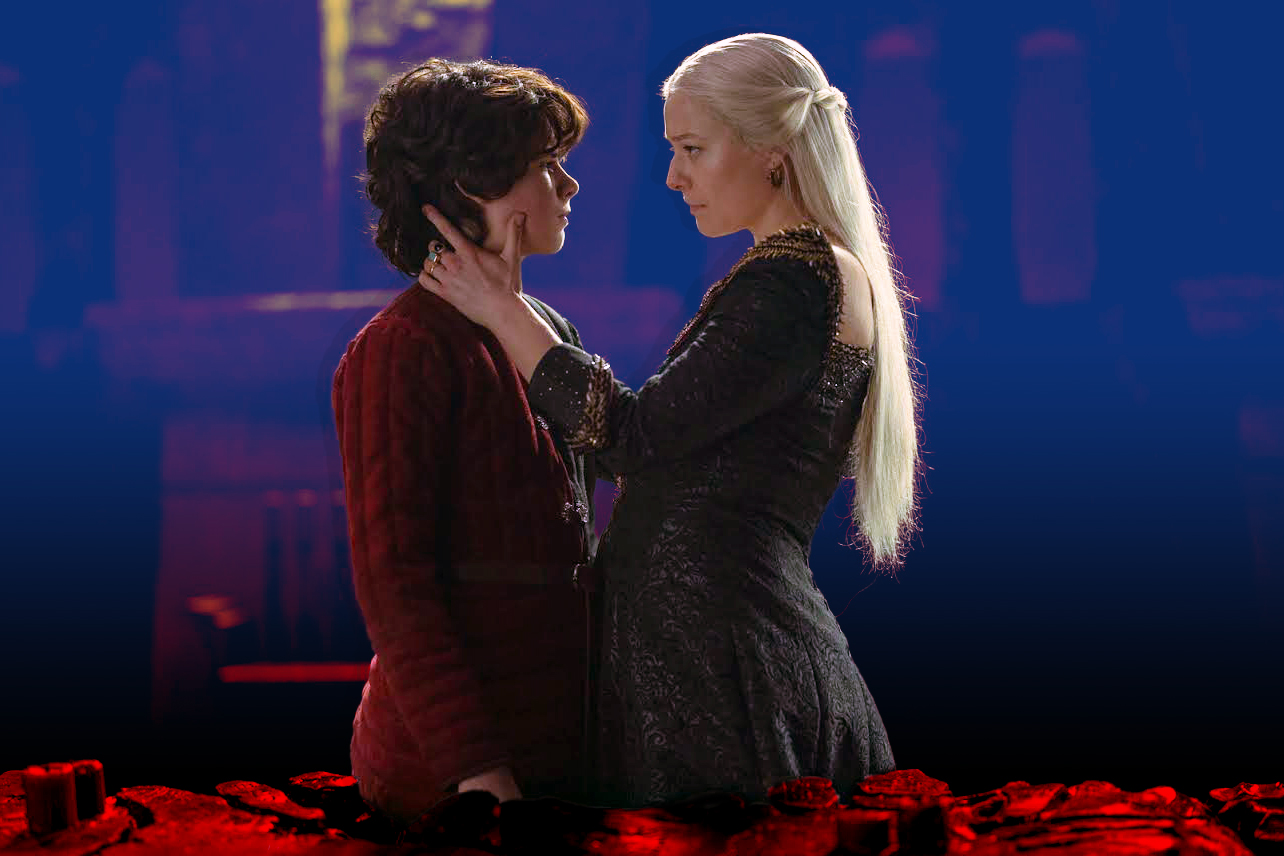 The House of the Dragon Season 1 finale on HBO ended on one of the most devastating moments in all of George R.R. Martin’s books. Rhaenyra Targaryen (Emma D’Arcy) dispatches her two oldest teen sons Jacerys (Harry Collett) and Lucerys (Elliot Grihault) on dragonback to act as messengers to lords she hopes to woo to her side in the impending civil war. The boys swear to their mother that they will not fight as warriors, but will only act as emissaries. That quickly goes south for Lucerys, aka Luke Velaryon.

While we’re not told what happens to older son Jace — he’s en route to both the Vale and Winterfell — second son Luke arrives at Storm’s End to a chilly reception from Borros Baratheon (Roger Evans). The proud lord is already entertaining Aemond “One Eye” Targaryen (Ewan Mitchell) and wants a princely match for one of his four daughters. Lucerys is already betrothed, but Aemond isn’t… But it gets worse for Luke.

Tensions between Aemond and Lucerys have been simmering ever since young Luke accidentally blinded Aemond in a messy kids’ fight. The House of the Dragon Season 1 finale ending brings their rivalry to a bitter, bloody conclusion. So what exactly happened? Did Aemond kill Lucerys? More importantly, did he mean to murder his nephew? And what does that final shot of Rhaenyra staring down the camera in fury mean for the future of House of the Dragon?

Photo: HBO
WHO DIES IN THE HOUSE OF THE DRAGON SEASON 1 FINALE ON HBO? LUCERYS, ARRAX, AND RHAENYRA’S DRAGON BABY VISENYA

By our count, there were three major deaths in the House of the Dragon Season 1 finale and they were all decisive blows against our girl Rhaenyra.

Early on in the episode, Rhaenyra goes into premature labor after learning that her father is dead and the Hightowers put Aegon II (Tom Glynn-Carney) on the Iron Throne. Unlike her last five pregnancies, this round of childbirth ends tragically. Baby Visenya — named for both Aegon the Conqueror’s fiery sister (and the name young Rhaenyra wanted her parents to name their baby if it was a girl) — not only comes too early, but not fully formed.

In George R.R. Martin’s Fire & Blood, one account of Rhaenyra’s childbirth claims she cursed Visenya, calling her a monster still in the womb. While the book gets the fact that Visenya had deformities right, it claims she was born with a tail and a hole where her heart should have been. That’s not quite the case in House of the Dragon.

It’s worth noting that House Targaryen has a sad history of occasionally bringing forth babies with dragon-like features. In Game of Thrones, we are told Daenerys’s stillborn baby by Khal Drogo was one such case. So did Visenya die because she was a Targaryen incest baby? Eh, Rhaenyra and Daemon have two healthy toddler boys, Aegon and Viserys, we met in Episode 8. More likely, the stress of the news of Aegon’s ascent to the Iron Throne rushed the labor.

But Visenya wasn’t the only child Rhaenyra lost in this episode. Lucerys is killed in a dragon battle by Aemond and his dragon Vhagar. Lucerys’s dragon Arrax is also lost in the fight.

However, while it’s taken for granted in Fire & Blood that Aemond killed Lucerys in cold blood, House of the Dragon complicates the situation…

Photo: HBO Max
DID AEMOND KILL LUCERYS BY ACCIDENT IN THE HOUSE OF THE DRAGON SEASON 1 FINALE?

While book fans weren’t shocked that Aemond and his massive dragon Vhagar made short work of Lucerys and his extremely tiny dragon Arrax, House of the Dragon threw a wrench in the story by making the lethal blow a total accident.

Sure, Aemond had every intention of intimidating Lucerys, but until baby dragon Arrax nervously snapped at the older, larger, and battle-tested Vhagar, no blows had been attempted. After that moment — which Lucerys frantically chastised Arrax for — all bets were apparently off. Vhagar acted against Aemond’s command and chowed down on the smaller dragon, killing Lucerys and Arrax while Aemond howled, “No!”

Has Aemond spent his entire life hating the Blacks and preparing for bloodshed? Sure. Did he intend to spill the first family blood? Apparently not! (After all, Aemond knows what such a move would precipitate and he’s not the idiot of his family.)

It’s a narrative choice turns Aemond into a less stark villain and echoes something that Viserys himself told Rhaenyra all the way back in the series premiere: the dragons are a power men never should have trifled with.

So what’s Rhaenyra going to do now?

Photo: HBO
HOUSE OF THE DRAGON SEASON 1 ENDING EXPLAINED: WHAT DOES THE LAST SHOT OF RHAENYRA MEAN?

The final shot of House of the Dragon Season 1 means war, baby!

After we watch Lucerys’s death, House of the Dragon cuts to Dragonstone. Daemon (Matt Smith) approaches Rhaenyra, who is looking at the fireplace. He whispers something to her and she turns around and stares down the camera. Her face is a mask of grief and fury. Rhaenyra is not going to sue for peace or take any treaties Alicent (Olivia Cooke) offers now that Luke is dead. It’s all out war…that we’ll have to wait until House of the Dragon Season 2 premieres to see unfold in full force.