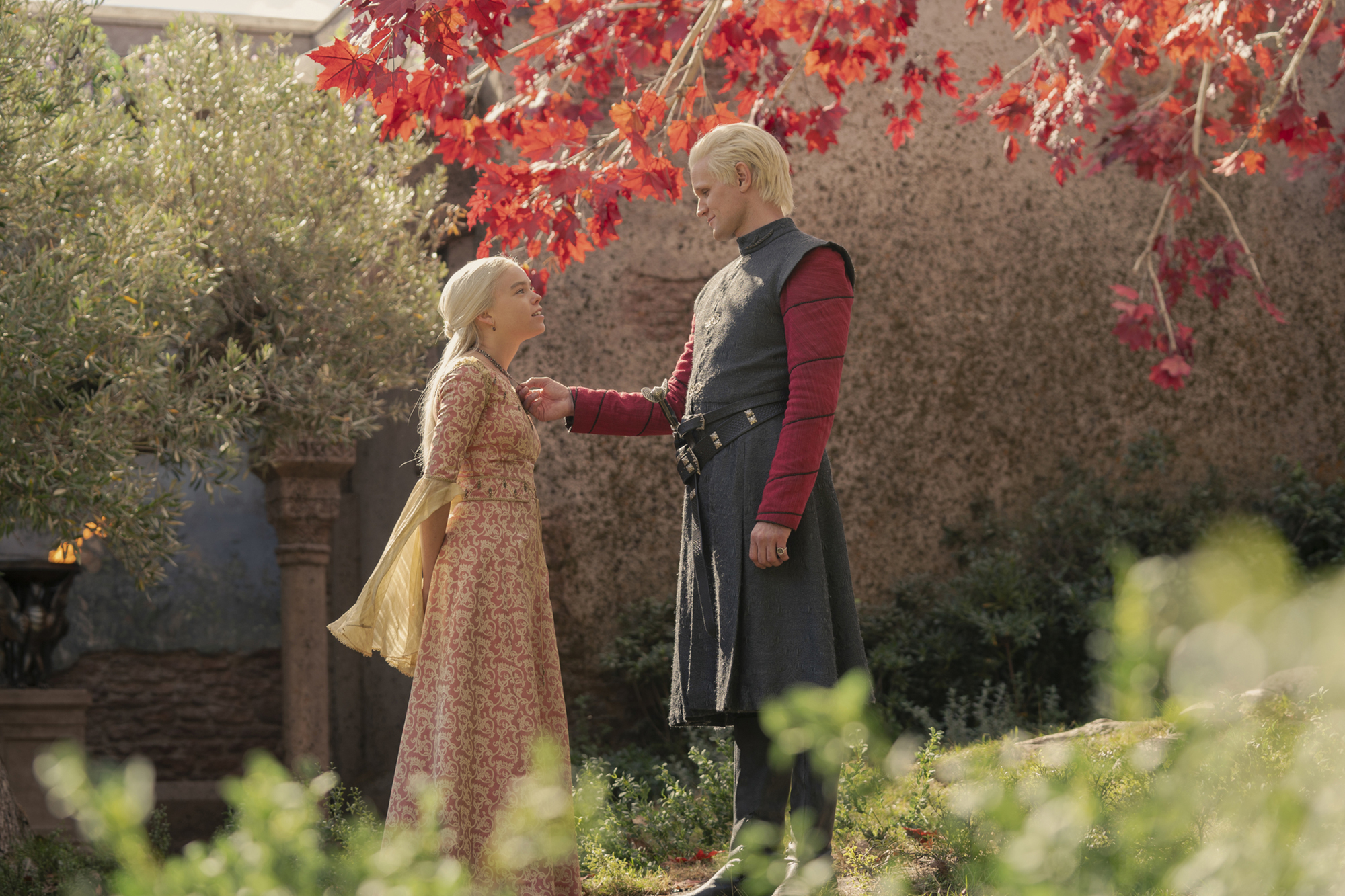 [Warning: Spoilers ahead for episode 4 of “House of the Dragon.”]

In Sunday night’s fourth episode of the “Game of Thrones” spinoff “House of the Dragon,” teen Princess Rhaenyra Targaryen (Milly Alcock) and her uncle Daemon Targaryen (Matt Smith) have an incestuous steamy make-out in the middle of a crowded brothel.

Although the scene is bound to raise eyebrows among viewers, Aussie actress Alcock, 22, told The Post that it wasn’t awkward to film.

“No, strangely enough. [Matt Smith and I] were just kind of mates. So, it was quite comfortable,” Alcock said about filming the scene with Smith, 39. “We had an intimacy coordinator, and we worked with her through the rehearsal process and blocked it out months before.”

“House of the Dragon” is set around 200 years before the events of “Game of Thrones,” and it follows Daenerys Targaryen’s ancestors as they scheme over who will succeed the current King (Paddy Considine) on the throne.

King Viserys named his daughter, Rhaenyra, as his heir, snubbing his dastardly younger brother, Daemon. But her position is uncertain, since Viserys recently had a son, who many people think should be the rightful heir instead.

Daemon was friendly with his niece, but now, it’s a relationship that’s a little too close. In this episode, Rhaenyra and Daemon see each other for the first time in several years (since Daemon previously angered the King and got exiled).

When Daemon returns to King’s Landing, he and Rhaenyra don disguises and go out for a night on the town. This culminates with Daemon bringing Rhaenyra to a brothel, where they walk through rooms full of other people who are getting busy, as a wide-eyed Rhaenyra takes it all in.

“Clare Kilner, our director, made sure that we hadn’t seen any of the brothel stuff until we were shooting,” said Alcock. “So, that was our first time walking through the brothel, and he’s guiding her through the room with all of these other bodies. So, that was quite shocking. You’re like, ‘This is kind of weird and silly.’”

“There were extras who we had just met who were like, 69-ing for 12 hours,” she added. “It’s pretty gnarly. We felt pretty overdressed, because everyone else was nude.”

Then, Daemon makes his move on his niece. Within the world of the show, incest isn’t unusual for the Targaryen family. But, it’s scandalous for Rhaenyra to be getting busy with anyone before she’s married off to someone that her father approves of — much less, her uncle who’s got a bad reputation.

“I think it’s complicated, I think Daemon is good for her … but whether or not he’s the right thing for her, time will tell,” said Alcock, who previously told The Post that she and Smith had a mutual understanding that the relationship is “charged, but under the surface.”

“Rhaenyra is at an age where she can’t tell the difference between platonic love, romantic love and lust, because she hasn’t lived long enough and gone through those experiences,” Alcock added. “I think that she understands that there’s a feeling here [with Daemon], but she’s not quite sure where it lands, and how to behave with it and navigate it.”

After their hot and heavy moment, Daemon ditches her. Rhaenyra returns home and ends up losing her virginity to Ser Criston Cole (Fabien Frankel), her sworn protector who stands guard outside her door at night. After reports of their illicit encounter reach the king, a hungover Daemon then gets exiled for a second time.

“I wrestled with [her feelings for Criston] the whole time, in the show,” said Alcock. “I think that she wants to be seen, and ultimately Daemon and Cristan Cole are the only two people who really see her. Both of them see her for different reasons. Daemon kind of has the upper hand, and Rhaenyra has the upper hand with Cole, and that turns her on a bit.”

“I think that she genuinely likes him. But I don’t think she would pick him over Daemon, ultimately.”

“House of the Dragon” is currently airing at 9 p.m. Sundays on HBO.