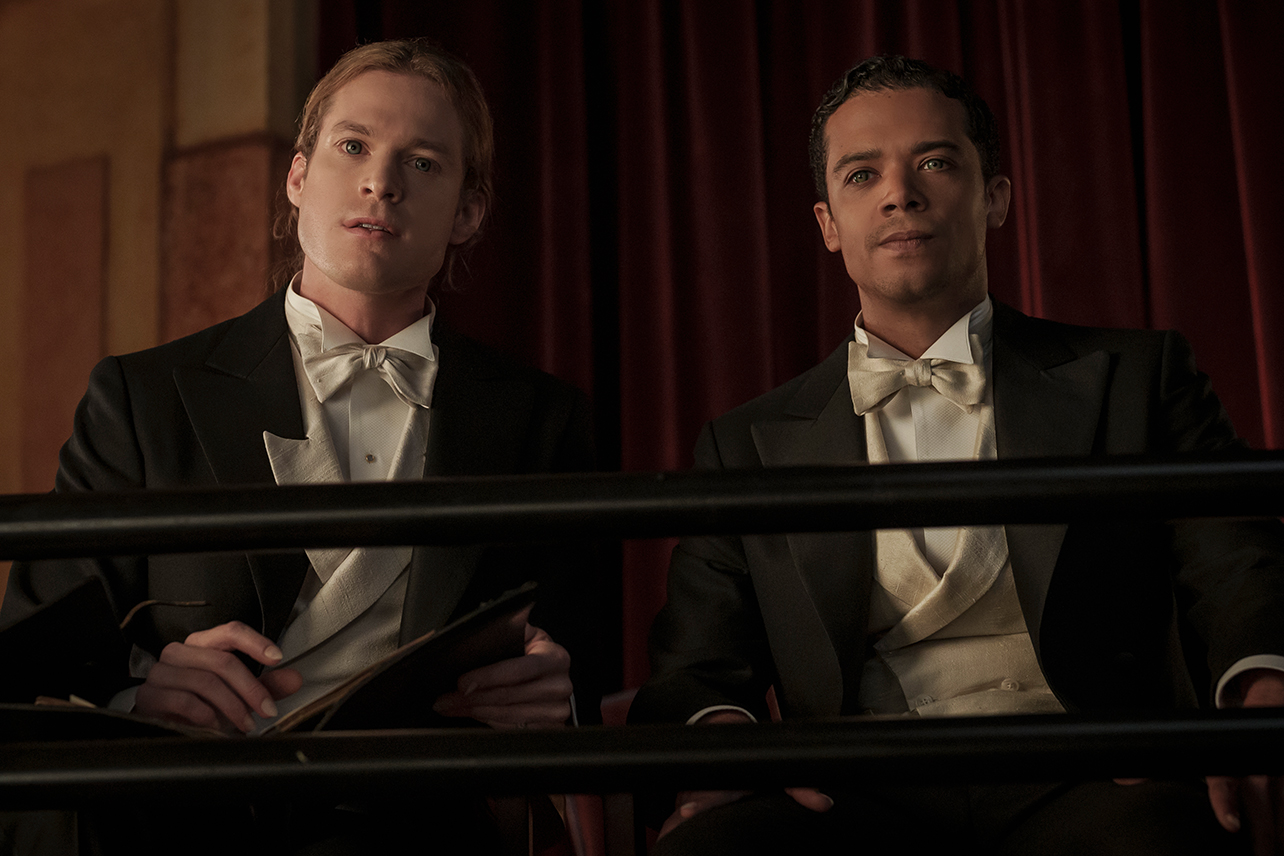 Interview with the Vampire Episode 2 “…After the Phantoms of Your Former Self” explores what a new romance is like between a vampire and his maker. After transforming Louis du Ponte de Lac (Jacob Anderson) is a vampire, his lover Lestat de Lioncourt (Sam Reid) has to show his new creation the ropes. There are a few hilarious scenes where Louis and Lestat go hunting and at least one where Louis loses control. However the most sumptuous moment has got to be when Louis and Lestat argue about killing a woeful tenor (Kameron Lopreore), only to share the singer’s blood in a most intimate way.

In Interview with the Vampire Episode 2, Louis recalls the ups and downs of his romance with Lestat to journalist Daniel Molloy (Eric Bogosian). We repeatedly hear that Lestat simply “had a way about him” that Louis couldn’t resist. That said, we see tensions already boiling over between the lovers. Mainly, they disagree about who to kill and how to kill. Lestat is upset that Louis, after chafing for years under the horrors of racism, lashes out at a white businessman. In Lestat’s eyes, killing such a visible member of the community will attract unwanted attention. However, Louis becomes even more unsettled when he realizes how Lestat enjoys prolonging the pain and suffering of his victims for the sake of enjoyment. Louis is also shaken when he almost eats his own infant nephew — something Lestat doesn’t seem fussed about.

Things come to a head when Lestat decides to woo Louis with a night out at the opera. However, things soon turn dark when the tenor singing the male lead in the opera is terribly out of his depths. Lestat is disgusted by the tenor and decides that he must die. Louis finds himself surprised by his “nausea” over this hunt. However by the end of the night, Lestat convinces Louis to feast on the tenor with him. It’s an argument that turns intimate, but there’s a darkness still lingering between them.

Interview with the Vampire star Sam Reid said he found the scene to be a “very Anne Rice scene” and praised showrunner Rollin Jones’s approach to the moment.

“And he can’t detach,” Reid said. “Whereas Lestat is coming from his own attachment to humanity which is through performance and aesthetics and art and music. And so you see both their attachments to humanity in that scene.”

“Then you also see the main friction between the two of them which is: ‘Yeah, it kind of sucks that we’re, you know, these evil monsters and this is what we have to do, but just get over it and embrace yourself,’ is what Lestat is saying. Like, ‘Just embrace it, come on and have a good time with me,’ not fully acknowledging what Louis needs.”

Anderson said, “So Louis’s like, ‘Why does this have to be a game? It’s awful what we do, we do it because of our nature but you don’t have to have fun, should this be fun?’”

That difference in ideology is what Anderson described as a “very early crack in their relationship.”

“He calls himself a ‘botched vampire’ and it’s like that I think the beginning of Louis realizing that he might not be best suited to being a vampire.”

Friends certain Kanye West is in the midst of a psychiatric episode
Here are your color combos you guys asked for ...