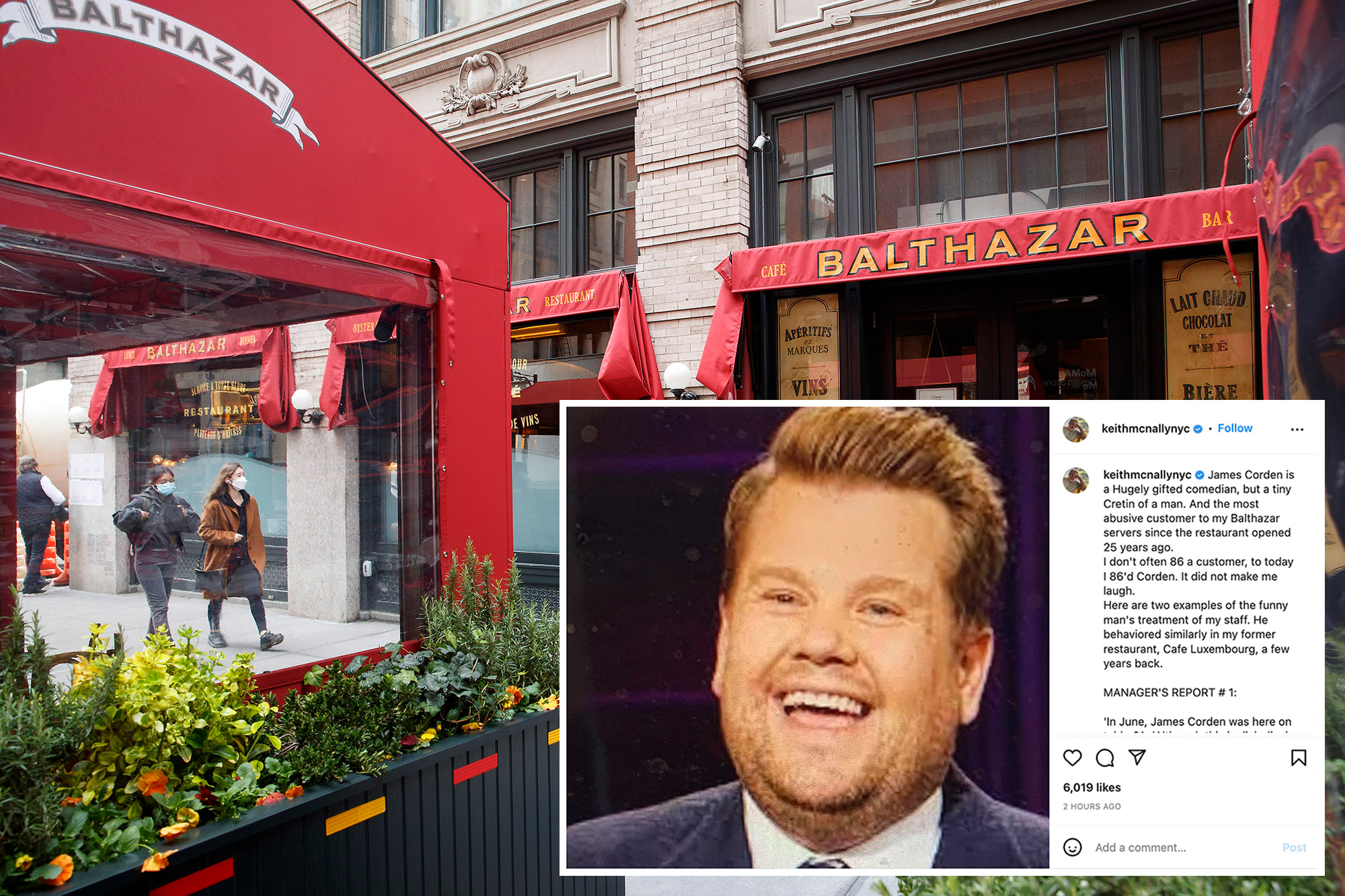 James Cordon is no longer allowed to fill his guts at an acclaimed New York City restaurant.

“The Late Late Show” host has been accused of boorish behavior by the owner of the posh Manhattan eatery Balthazar — who dubbed him a “tiny Cretin of a man” and banned him from dining there ever again.

“[He’s] the most abusive customer to my Balthazar servers since the restaurant opened 25 years ago,” said Keith McNally in a scathing Instagram post put up late Monday.

McNally accused Cordon, who has admitted to having anger issues in the past, of treating his servers poorly by demanding free items and yelling at them.

According to a manager’s report, the first run-in with Cordon happened in June. The funnyman allegedly ate his main course before showing a server a hair in his order.

“Get us another round of drinks this second,” McNally alleged Cordon demanded. “And also take care of all of our drinks so far. This way I write any nasty reviews in yelp or anything like that.”

The second incident happened on Oct. 9, according to the post.

Cordon, whose late night talk show has a recurring segment called “Spill Your Guts or Fill Your Guts,” reportedly called a server over to tell them that there was a little bit of egg white mixed with the egg yolk in his wife’s omelet.

The restaurant remade his wife’s meal but brought it to her with home fries instead of a salad. That was enough for Mr. Cordon to “yell like crazy” at the server.

Cordon has not responded publicly to McNally’s allegations — either on social media or to requests for comment from The Post.

But in 2020, he admitted to having anger issues that he said started in the late 2000s, when he first became famous.

“I started to behave like a brat that I just don’t think I am,” he told the New Yorker. “It’s so intoxicating, that first flush of fame, and I think it’s even more intoxicating if you’re not bred for it.”

He said that because of his behavior he actually visited a therapist, who told “I used to be a better person than this” during the first session.

His antics were alluded to that year by comedian Eric Andre who, told Vanity fair, while talking about cancel culture, that “James Corden is f - - ked if that’s [being mean] the only criteria to get called out.”

Soy un GUARRO en la cama ...
Whenever you feel you have "butterflies in my stomach" this is your brain telling your body to release adrenaline and trigger the fight or flight response. Anxiety causes the 'butterflies' and is one of our body's way to signal internal and external stressors.