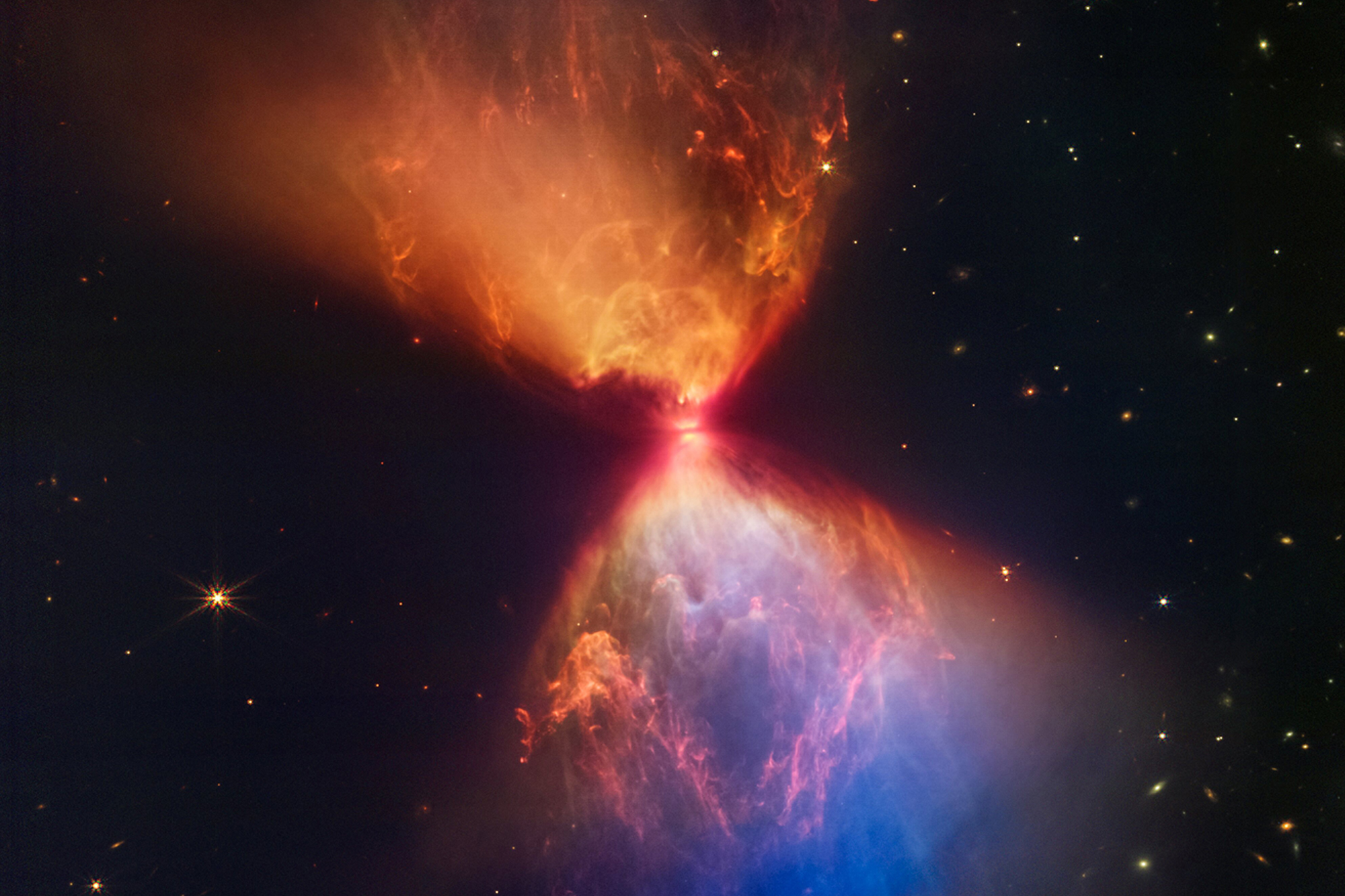 The beginnings of a new star were captured by NASA’s James Webb Space Telescope, and like many other images from the JWST, it is just as mesmerizing.

Known as protostar L1527 IRS, the new star is located in a nebula of the constellation Taurus.

An image taken by the James Webb Space Telescope shows the protostar illuminating part of the nebula, with beams of light creating a bright, hourglass shape set upon the backdrop of dark clouds of dust and gas.

The top half of the “hourglass” reveals clouds of gas and dust in shades of orange and bronze, while clouds on the bottom half are awash in blues and lavenders.

Such a vibrant display of colors is due to the clouds only being visible in infrared light, allowing them to be captured by the Near-Infrared Camera (NIRCam) on the James Webb Space Telescope.

The image captured by JWST is a representative-color infrared image, meaning that the colors represent the density of the gas and dust clouds being illuminated – not the colors of the clouds themselves.

Areas where cloud material is the thinnest, are shown in blue, while areas where they are thickest appear in orange.

The top half of the “hourglass” reveals clouds of gas and dust in shades of orange and bronze, while clouds on the bottom half are awash in blues and lavenders.
NASA, ESA, CSA, STScI / IMAGE PROCESSING: Joseph DePasquale (STScI), Alyssa Pagan (STScI), Anton M. Koekemoer (STScI) / NASA

An enormous mosaic of Stephan’s Quintet is the largest image to date from NASA’s James Webb Space Telescope.
NASA, ESA, CSA, and STScI via

At the “neck” of the colorful hourglass lies the protostar. While hidden from direct view in the image, signs of the protostar can be seen by the light being emitted above and below a dark line in the middle of the neck. It is this light that forms the illuminated “hourglass” in the nebula.

The dark line indicating the location of the protostar is a protoplanetary disk, or a dense region where the material is clumping together, which surrounds the protostar. From this material, planets may eventually form.

Protostar L1527 is relatively young at only about 100,000 years old – for comparison, our Sun is estimated to be 4.5 billion years old.

The protostar and protoplanetary disk encircling it is approximately the size of our solar system. It is a window into what our solar system may have looked like before the sun, and the planets took shape.