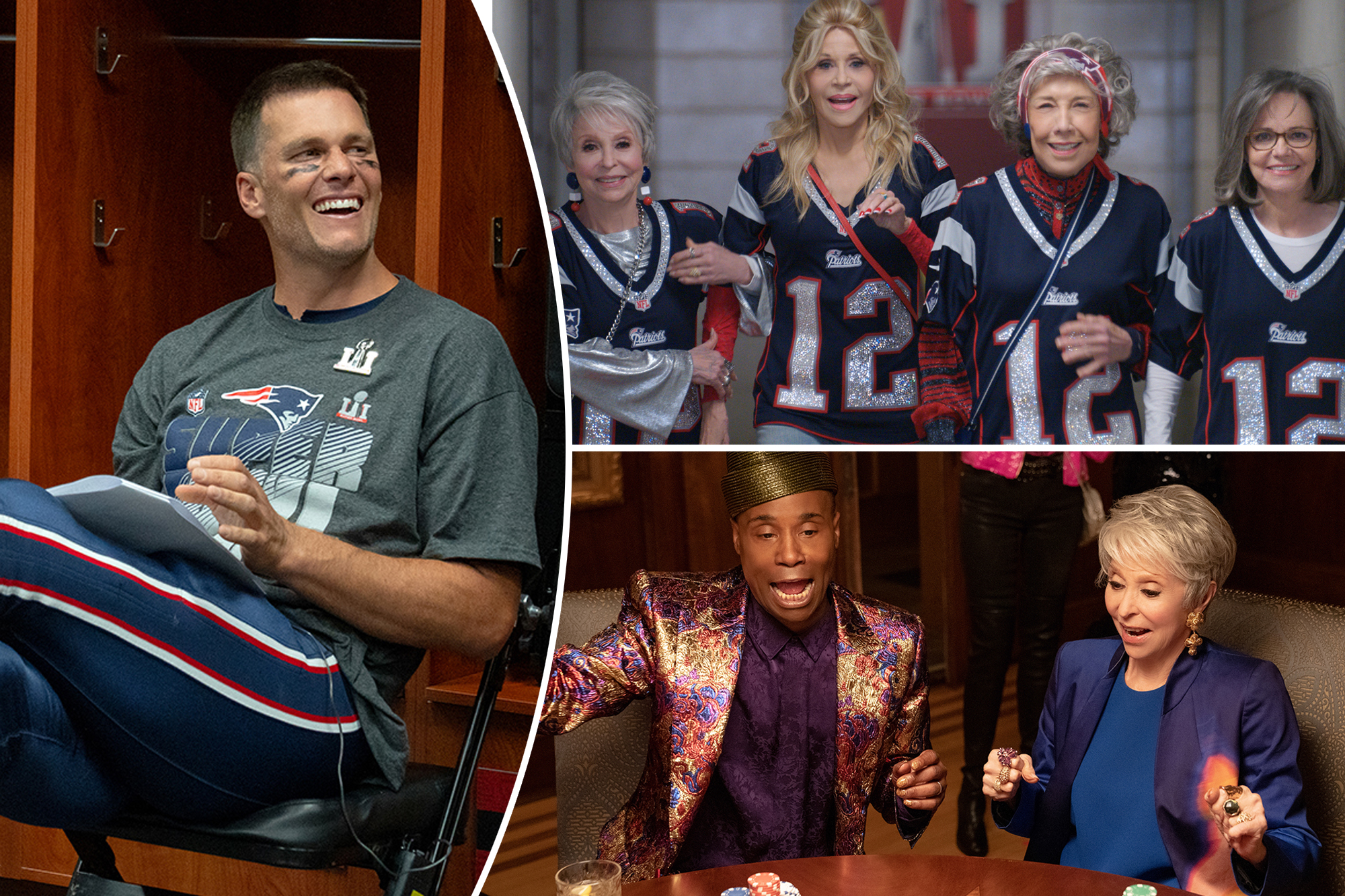 Tom Brady may have lost his supermodel wife Gisele Bündchen — but he has four sexy Hollywood legends to keep him company now.

Screen legends Jane Fonda, Sally Field, Rita Moreno and Lily Tomlin are teaming up for the new comedy “80 for Brady,” and they’re on their way to meet the football star in his film debut.

The rom-com — out Feb. 3 — follows the four women pals as they take a road trip to see their fave NFL player of all time.

A first-look teaser was released Thursday, giving viewers a glimpse of the ladies getting wild.

The trailer starts with the fab four decked out in bedazzled red and blue New England Patriots jerseys as they watch a game on TV featuring Brady — who in real life is now 45 and on the Tampa Bay Buccaneers.

The women have an epiphany: They have become too boring and decide to take a crazy trip to the Super Bowl to see the football game — and their favorite player — in action.

“The Super Bowl is no place for four old women,” Moreno’s character quips.

The flick is actually based on a true story of a group of senior citizens who traveled to Houston in 2017 to watch Brady and the Patriots compete against the Atlanta Falcons at the Super Bowl.

Elsewhere in the teaser, the women get into a series of hijinks as they try to get into the big game to rave over Brady.

Harry Hamlin makes a guest appearance, fawning over Fonda’s character and being a flirt. “Beauty has no expiration date,” the “Mad Men” actor says.

In another shot, they take part in a spicy-wings-eating contest with Food Network icon Guy Fieri playing the competition’s emcee.

Even a crazy hip-hop dance battle comes their way, with “Pose” and “Kinky Boots” star Billy Porter serving up some moves.

Guy Fieri makes a cameo appearance in the comedy as a host for a hot wings eating contest.Scott Garfield

Enter the Gronk: The 33-year-old Gronkowski towers over Fonda and her pals and they can’t help but drool over him.

“Isn’t that what friendship is? To face the unknown together,” Field’s character wonders aloud in the clip.

And what movie trailer about Brady isn’t complete without an appearance from the quarterback himself? The father of three is shown on the field while Tomlin, Fonda, Field and Moreno cheer him on.

Brady has been through the ringer lately, as he and Bündchen, 42, finalized their divorce last month. The pair were married for 13 years and have kids Benjamin, 12, and Vivian, 9, together.

The Victoria’s Secret model allegedly gave the athlete an ultimatum and threatened to end their marriage before their high-profile split.

Bündchen was then seen on the rebound last week, when she was spotted hanging out with jujitsu instructor Joaquim Valente in Costa Rica.

James Webb telescope releases image of new star form
Does anyone want to sponsor our podcast link in bio ...