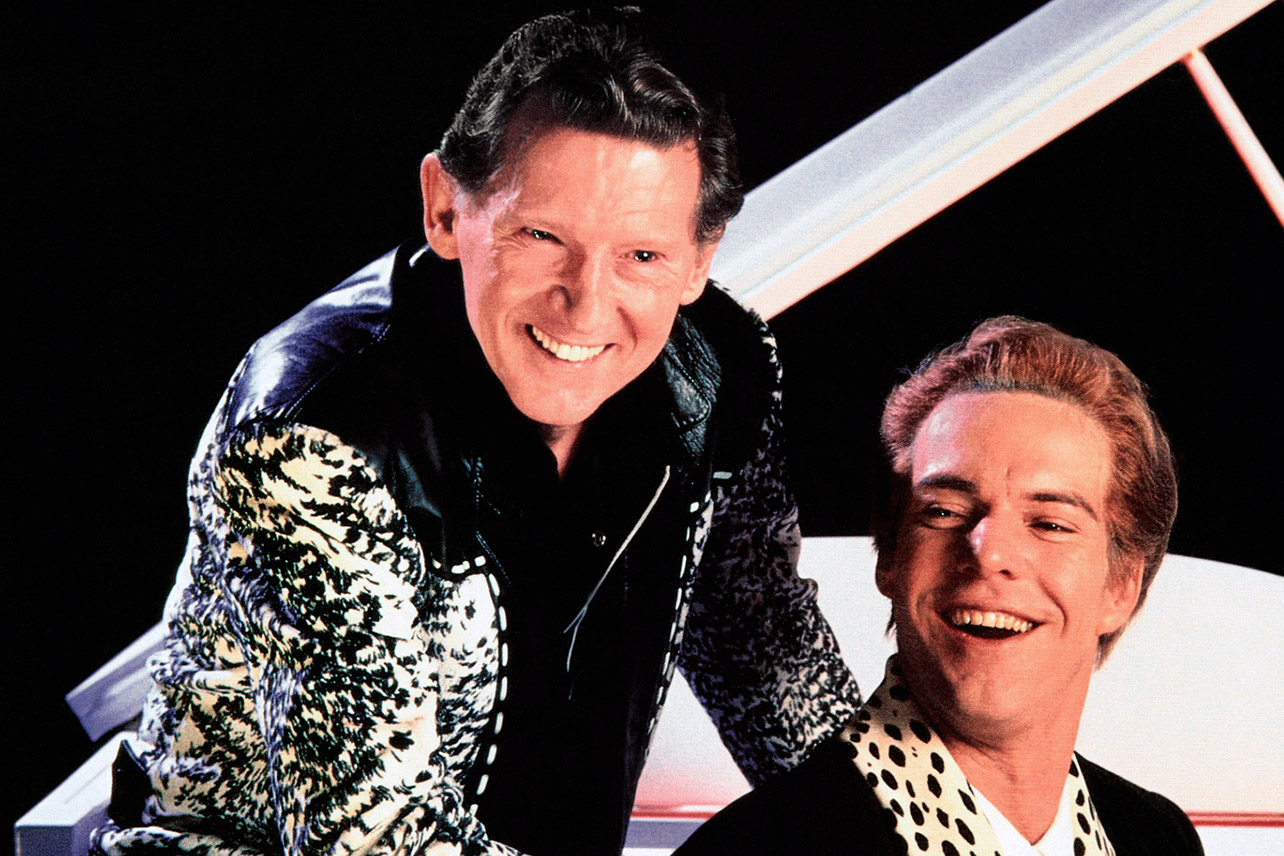 In 1989 Orion Pictures released Great Balls of Fire, an energetic if arguably over-Hollywoodized fictionalization of a fairly fraught episode in the life of the groundbreaking rock and country music artist Jerry Lee Lewis. Said episode being his marriage in 1958 to one Myra Lee Brown, who in addition to being a cousin, was a mere thirteen years of age at the time of the nuptials. Jerry Lee himself was 22. The source material for the movie was Myra’s own memoir (the first of two; in the second she paints a much less congenial picture of her alcoholic, abusive former husband).

At that time Orion seemed pretty flush, and the studio liked spending money on courting the press. In addition, more than any other studio at the time, Orion treated the “home video” press as well as they treated “legit” movie journalists. So I, then a senior editor at a magazine called Video Review, got invited to the grand junket Orion was throwing for the movie — a long weekend in Memphis, Tennessee, where Jerry Lee launched his career with Sam Philips and Sun Records. We’d get press conferences with director Jim McBride, stars Dennis Quaid (as Jerry Lee) and Winona Ryder (as Myra) and supporting players. And maybe, just maybe, The Killer himself would show up and take a few questions.

What a weekend it was. A couple of my favorite colleagues were along for the ride — film historian Ed Hulse, then the editor of a Video Review offshoot called Previews, which was a giveaway at video chains like Blockbuster, and Ira Robbins, the founding editor of the great rock and roll zine Trouser Press, whose day job was at Video Magazine, which was Video Review’s direct competitor. While the respective publishers of the rival magazines preached a gospel of hate, the editorial staffs of the two rags got along fine.

The junket was, in prime Orion fashion, off the hook. I ate like a pig and drank like a fish and I don’t think I spent a dime of my own money. We got a tour of the original Sun Studios. We ate excellent dry-rub barbecue at the Rendezvous. We watched the ducks parading at the Peabody. We heard some good blues and downed a lot of bourbon on Beale Street. At that point in time the legendary music boulevard was already deemed overly friendly to the visiting gentry, but my late 20s self was thinking, if this is a tourist trap, close it in on me.

How was the movie, you ask? Oh, it was fine. One of Jim McBride’s prior films had been an audacious remake of Jean-Luc Godard’s Breathless, starring Richard Gere and Valerie Kaprisky, and in his revision, the lunkhead criminal of Godard’s picture is besotted with the Silver Surfer and Jerry Lee Lewis, singing Lewis’ 1958 song “Breathless” at times both opportune and inapt. Some have speculated that Godard himself was inspired by Lewis’ tune, but that’s doubtful. Godard’s exposure to rock and roll cinema was restricted to Frank Tashlin’s The Girl Can’t Help It, which Lewis did not appear in. Lewis did, of course, memorably sing the title song to High School Confidential from the back of a pickup truck in that 1958 film.

In any event, it stood to reason that McBride would jump at the chance to bring one of the wildest times in Lewis’ life to the screen. At the same time the movie had an oddly scrupulous tone — rather than show Lewis as, you know, a child abuser, the movie goes along with the notion that he blew up his career for love. Maybe one reason the movie isn’t often screened (or available to stream) these days is because that conceit just will not fly at all anymore.

I don’t recollect too much about the press conferences, but I do remember that Quaid was feeling pretty feisty. But in a good way. My buddy Ira got to do some catching up with John Doe of the legendary Los Angeles punk band X, who played Lewis’ bass player J.W. Brown in the movie. The video press got herded from room to room to meet the various players. The last room we got to was a little less like a modern conference room and a little more old-hotel executive gathering room, with a wooden table at the front of the space and a Louis XV chair with dark chenille upholstery off to one side. And it was that chair that Jerry Lee Lewis himself settled into after quietly walking into the room.

He was not introduced because he needed no introduction. And also because he brought down the room’s temperature by about five degrees when he walked in.

Let me give a little background here. Jerry Lee Lewis was long nicknamed “The Killer.” He was a monumental talent, an indefatigable entertainer, and an unpleasant person much of the time. More than unpleasant on numerous occasions. It is an undisputed fact that in 1976 he shot his bass player at the time, Norman “Butch” Owens, in the chest. It was an accident, but it was an especially stupid accident: at the time Jerry Lee had been firing a gun through his office door for no good reason. Also in 1976, Lewis drove up to the gates of Elvis Presley’s estate Graceland and waved a gun around, and soon insisted to intervening police that he “needed to see” The King. I had heard through the grapevine that Nick Tosches, author of the brilliant and unrestrained Lewis biography Hellfire, had, after that book’s publication, discovered some information about Lewis so heinous that it inspired Tosches to torch his entire collection of Lewis vinyl and memorabilia. Torch, not sell. (And if you know Tosches’ work you know he had a pretty high tolerance for socially deviant behavior.)

Let’s see. What else. Oh: in 1984, Rolling Stone had published an article (“The Strange and Mysterious Death of Mrs. Jerry Lee Lewis”) by the stellar investigative journalist Richard Ben Cramer, looking into the death of Lewis’ sixth wife — after less than 80 days of marriage — and strongly insinuated that Lewis had something to do with it.

And here he was. I’d like to say larger than life, but he wasn’t. Lewis was a just a hair shorter than Quaid, but he seemed more slightly built, more drawn into himself so to speak. Even though Quaid wasn’t in the room, Lewis seemed as if he might be dwarfed by the feeling-his-oats actor. He wore a cream-colored button-down shirt and brown polyester slacks, and his eyes were beady, almost black. He held a pipe in his hand and he sometimes tamped some tobacco into it, lit it, took a puff, and then held it near his knee.

The questions started coming. They were the usual junket stuff: how did he get along with the actors, what input did he have, that sort of thing. In appraising Quaid he was terse in his praise. He was not a man who liked to talk about talents outside the context of his own; at least, that’s one way of thinking about it. Another is that he had some kind of obligation to be there. He must have been well compensated to show up, because he was keeping his resentments as tightly tamped as the tobacco he fed his pipe.

But then an eager beaver perked up. This fellow asked Lewis: “Watching this film crew depict a very messy time in your life” — for indeed the scandal of his marriage to Myra constituted a form of professional suicide — “did it wind up having a cathartic effect for you?”

Lewis furrowed his brow and fixed the guy with the blankest of blank stares. Playing the laconic yokel, he drawled, “Well, son, I really don’t know the meaning of the word you’re using there.” I was thinking: “Oh, he absolutely knows it.”

The eager beaver pressed on: “I mean, did it have a psychologically purging effect for you?”

This time Lewis let out an entirely mirthless chuckle. “Son, that is way over my head.” Again, it clearly wasn’t.

But the interlocutor was not getting the signal. He gave it one more try. “What I mean is, did it help you get anything off your chest?”

And that cut it. Jerry Lee Lewis, the Pentecostal hell hound who once agonized over the potential blasphemy of singing “Great Balls of Fire,” tapped his pipe on his thigh, stared at the guy ever more intently, and said, with great deliberation, “Son, in this life I don’t believe you ever really get anything off your chest. Do you?”

End of discussion. As my buddy Ed Hulse recollected on Facebook, he turned to the fellow sitting next to him — it may have been me — and said “Whatever it was, he did it.”

And I still played his fantastic live album At The Star Club in his honor today. What are you gonna do?

Veteran critic Glenn Kenny reviews‎ new releases at RogerEbert.com, the New York Times, and, as befits someone of his advanced age, the AARP magazine. He blogs, very occasionally, at Some Came Running and tweets, mostly in jest, at @glenn__kenny. He is the author of the acclaimed 2020 book Made Men: The Story of Goodfellas, published by Hanover Square Press.

Get in the Halloween spirit with Gwen Stefani, Charlize Theron and more
Trump on Twitter will remind voters of 'unbalanced' ways