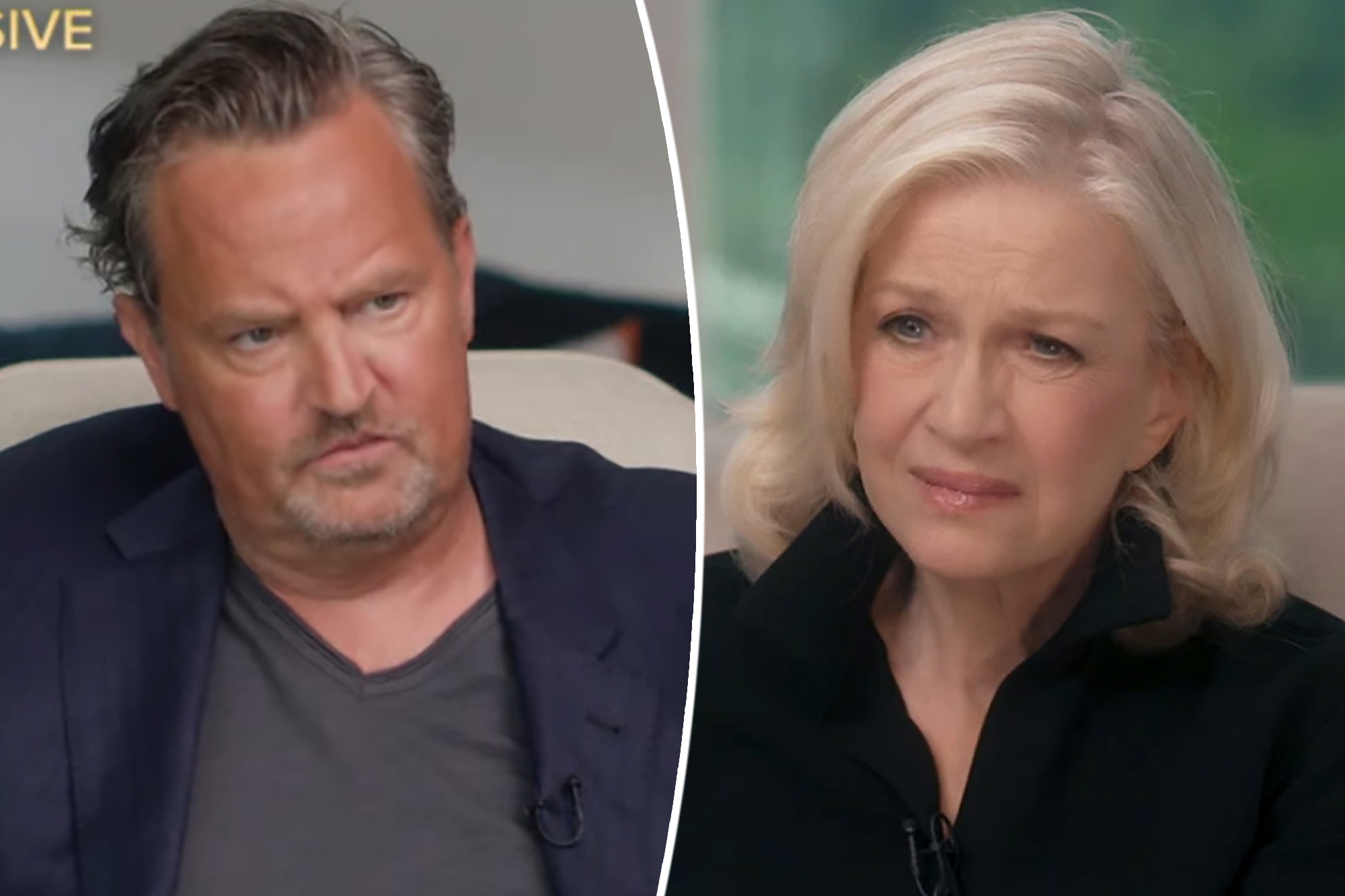 “They did all sorts of things,” the actor, 53, told Diane Sawyer during a sit-down that aired Friday on ABC’s “Nightline,” adding that the procedure “made [his] mouth feel like fire.”

At the time, Perry’s slurred speech and thousand-yard stare left fans worried about his well-being.

“It sounded like my voice was off,” he acknowledged, but he knew he “couldn’t not show up.”

“So what I chose to do was just go and do the best that I could,” he told the longtime interviewer, who noted the “wear and tear on his voice and speech.”

Matthew Perry told Diane Sawyer on Friday that he had to undergo “emergency dental surgery” days before filming the 2021 “Friends” reunion.

Matthew Perry told Diane Sawyer on Friday that he had to undergo “emergency dental surgery” days before filming the 2021 “Friends” reunion.

Perry recently disclosed that he’s been clean of all substances for the past 18 months, meaning he was newly sober by the time the highly anticipated reunion aired in May 2021.

The “Whole Nine Yards” star spoke to Sawyer ahead of the Nov. 1 release of his tell-all, “Friends, Lovers, and the Big Terrible Thing: A Memoir,” the contents of which he has detailed in several recent interviews.

One of the many bombshells he’s discussed is the fact that his front teeth fell out while he was biting into peanut butter on toast, which is why he had to have them all replaced.

Sawyer noted the “wear and tear on his voice and speech.”ABC News

During his interview with Sawyer that at some points became tearful, Perry elaborated on the time his “Friends” co-star, Jennifer Aniston, came to his trailer to intervene, saying the cast could smell booze on him.

He admitted there were times his co-stars had to “prop [him] up” and that producers confronted him about his addictions, too.

Perry told Sawyer, 76, that he’s attended somewhere around 6,000 AA meetings, been in therapy for 30 years, spent half his life in treatment or in sober living houses, and been to detox approximately 65 times.

Earlier this month, Perry revealed he almost died in 2018 when his colon burst from opioid overuse.GC Images

Earlier this month, the actor revealed he came scarily “close to dying” in 2018 when his colon burst from opioid overuse.

At the time, Perry publicly claimed he had suffered a “gastrointestinal perforation,” but in reality, he spent five months in the hospital — including two weeks in a coma — and had to use a colostomy bag for nine months.

“The doctors told my family that I had a 2 percent chance to live,” he told People in a story published Oct. 19. “I was put on a thing called an ECMO machine, which does all the breathing for your heart and your lungs. And that’s called a Hail Mary. No one survives that.”

Perry also told the outlet he was one of five people hooked up to life support that night and that “the other four” did not make it.

The Emmy winner — who’s been to rehab a total of 15 times — explained that the scars from his dozens of stomach surgeries are “a lot of reminders to stay sober.”

He added that his therapist also helped him kick his addictions when they told him, “‘The next time you think about taking Oxycontin, just think about having a colostomy bag for the rest of your life.’”

The “Fools Rush In” star said the remark prompted “a little window” to open and that he “crawled through it.”

He revealed in his interview with Sawyer that Jennifer Aniston once came to his trailer to intervene, saying the cast could smell booze on him.NBCUniversal

Talking to the New York Times shortly after his chat with People, Perry estimated that he’s “spent $9 million or something trying to get sober.”

During the same interview, the actor reflected on how his decades-long and “exhausting” addictions to drugs and alcohol took over his life at the height of his lengthy career on “Friends.”

At one point, Perry “would wake up and have to get 55 Vicodin that day and figure out how to do it.”

“When you’re a drug addict, it’s all math,” he said. “I wasn’t doing it to feel high or to feel good … I just wanted to sit on my couch, take five Vicodin and watch a movie. That was heaven for me. It no longer is.”

He told the Times he began drinking beer and wine when he was 14, which spiraled into a combination of vodka by the quart, Vicodin, Xanax and OxyContin. He said he drew the line at heroin.

Perry recently announced that he’s been clean and sober for 18 months. mattyperry4/Instagram

In his memoir, Perry writes that immediately after his “Friends” character, Chandler Bing, married Monica Geller (Courteney Cox) during the Season 7 finale, which aired in 2001, he was “driven back to the treatment center … in a pickup truck helmed by a sober technician.”

He admits that fans of the show can actually tell which drugs he was taking by tracking his “weight from season to season.”

The actor’s book, “Friends, Lovers, and the Big Terrible Thing: A Memoir,” is out Nov. 1.Amazon

The actor also reveals that he had to exit the 2021 movie, “Don’t Look Up,” after his heart stopped “for five minutes” in the middle of back surgery because his anesthetic medications had combined with the hydrocodone still in his system from the night before.

He pens that he is currently on Suboxone — a drug that treats opioid withdrawal — and will be taking it for the rest of his life.

Perry told GQ in an interview published Thursday that he doesn’t expect his “Friends” co-stars — with the exception of Lisa Kudrow, who wrote the foreword — to read his book because he believes only “addicts … and fans of ‘Friends’ are going to care about this.”

Yes, microwaved is acceptable. ...
'It's totally crazy and bats--t off the wall'