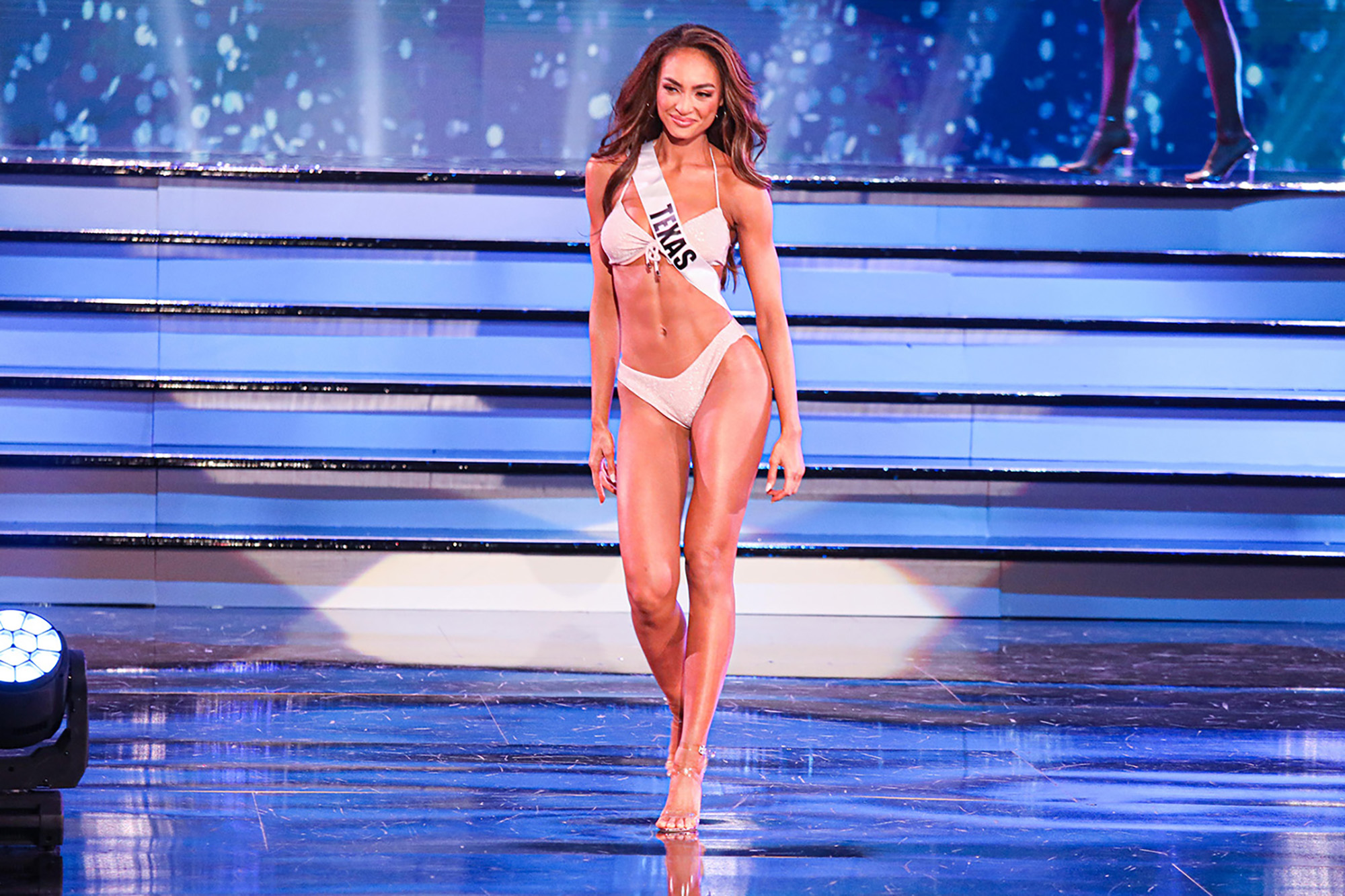 In case you Missed it, the pageantry world was turned upside-crown this week.

Following a flood of allegations from contestants that Monday’s Miss USA 2022 competition was reportedly “rigged,” the Miss Universe Organization revealed they will be conducting an “active review” into the claims, which the Miss USA Organization and its winner have both denied.

“We are aware of the concerns that have been brought forth by this year’s Miss USA contestants,” the organization told The Post in an emailed statement. “We commend the women for bringing these issues to our attention and will always be an organization that encourages women to use their voice.”

The Miss USA title winner represents the country in Miss Universe each year, which means Miss USA 2022 R’Bonney Gabriel will compete on a global scale next year.

“We firmly believe everyone has a right to express their thoughts and experiences without retaliation and bullying,” the Miss Universe rep added. “There are existing systems in place to ensure the fairness of our national competitions and as such we have begun an active review into this situation.”

Gabriel, 28, told The Post in an emailed statement that the contest was not “rigged.”

“The current allegations are based on perception and not the truth,” she said. “I would never want to enter a competition that was rigged. I know all of the contestants worked really hard to prepare and I don’t want these allegations to overshadow the accomplishments of all the women who participated in this year’s Miss USA competition.”

Gabriel said she knows “how hard every woman worked” and she wants “their efforts to also be acknowledged.”

“At this time, I am excited to move forward with training for Miss Universe and all of the opportunities that the Miss USA Organization will provide, while expanding on my personal platform for sustainable fashion and advocating for charity partners Best Buddies and Smile Train,” she said.

The statement follows a whirlwind of bombshell accusations online, claiming that the competition was rigged in favor of Miss Texas, now Miss USA, Gabriel.

“Most of the Miss USA contestants feel very strongly that there was favoritism towards Miss Texas USA and we have the receipts to prove it,” Miss Montana Heather O’Keefe claimed in a TikTok video — one out of a series of clips — with over 29,000 views.

O’Keefe did not immediately respond to The Post’s request for comment.

When Gabriel was crowned Miss USA, users online found it odd that the other contestants didn’t stay on stage to congratulate her.Finesse Levine

Crystle Stewart — president of the Miss USA Organization and the 2008 Miss Texas USA who went on to win the whole pageant — told The Post she would never “rig a competition” that she herself “fought so hard to win.”

“The allegations against the Miss USA Organization are misleading and against everything I stand for personally and professionally,” she told The Post in an emailed statement.

“As the first African American woman in this leadership role I take this position with all seriousness and regard,” she continued. “When I won Miss Texas USA, Miss USA and more recently, became President of the Miss USA Organization many women of color were inspired and filled with hope. I would not do not anything, such as a ‘rig a competition’ that I fought so hard for to win, and jeopardize that hope.”

Stewart, 41, said that the “fairness of the pageant” as well as the “well-being of each and every contestant” is her “top priority.”

“As a former title-holder, I learned firsthand the importance of a fair and unbiased pageant competitionI [sic] and I respect the voices of the Class of 2022 and every woman’s right to have their voice heard.”

The former beauty queen told The Post that Miss USA will cooperate in Miss Universe’s investigation brought forth by the pageant whistleblowers.

“Myself, my staff and pageant partners take this very seriously and are cooperating with the Miss Universe Organization as they investigate the allegations,” she said.

Stewart revealed that Miss USA will also conduct its own “internal review to asses [sic] our staff and other personnel to ensure that there was fairness, non-discrimination and no favoritism amongst the contestants.”

“In every attempt I want to ensure there is an equal playing field for every contestant from uniformity in wardrobe, sponsored headshots, mental health workshops and complimentary training,” she said. “All to protect, educate, and empower our contestants.”

“We are proud to have the first Phillipina-American represent Miss USA,” she said. “I hope the Class of 2022 will embrace this historical win and try to understand my mission and vision for the Miss USA Organization; which is to provide resources, experiences, and opportunities to be productive and successful women.

“This is how I imagine pageantry.”

“Not to mention, the actual Miss USA page reposting Texas on the official Miss USA page and no other state contestant got this kind of treatment,” O’Keefe claimed in another video.

“Y’all don’t tell me you can’t see it,” she said of the alleged “favoritism.” “Nothing against Texas as a person, I truly think she could’ve won fair and square, but unfortunately all of this drama has tainted her win. But there’s just too much evidence of favoritism to let this go unnoticed.”

She also alleged that all of the women left the stage as Gabriel’s name was announced as winner, as seen on Monday’s live telecast, because they believed the contest was “rigged.”

Gabriel denied the accusations in an exclusive interview with E! News Friday.

“I want to start by saying it was not rigged because I would never enter any pageant or any competition that I know I would win. I have a lot of integrity,” Gabriel told the host of E! News: The Rundown.

She added that the image of Stewart doing her hair was taken the following morning — Tuesday — when she was in glam for her photoshoot post-win.

“Crystle was there of course,” she said, “and she stepped in and actually did my hair because she said, ‘Hey, I can do a snatched ponytail,’ and I said, ‘I’d love to see it.’”

The photos are already released, of course, because they “move really fast,” Gabriel explained.

When asked if contestants exiting the stage abruptly after her crowning was because they were upset, Gabriel said she didn’t believe that to be true.

“Our time was cut short, so the girls couldn’t come out to the stage apparently because there wasn’t time and they didn’t want the girls to go into that bubble and maybe fall,” she said, adding that it’s just what she “heard” from production. “When I went back to the girls, they all hugged me.”

In fact, she claimed she “got along with” all the women competing, and wasn’t aware of any rumors circulating that the contest would be rigged.

“It’s just kind of a coincidence that I am from Texas and a lot of, maybe, the organization team are as well,” she continued.

To add to the mountain of claims, O’Keefe also claimed it was suspicious that Gabriel received services at Nizuc Spa, which is home to a medspa operated by MIA Beauté, a sponsor of Miss USA. She claimed the spa posted footage from the visit nine weeks before her Miss USA win and again almost immediately after she was crowned.

Gabriel explained to E! News that while she visited the spa, Nizuc did not fly her out to Cancun for the treatments she did receive. Instead, she was merely acting as a brand ambassador for MIA Beauté, which sponsors both Miss Texas USA and the entire Miss USA organization, after winning her state title.

Hence, Gabriel claimed the videos of her receiving treatments were for Miss Texas and filmed before her big win, shooting down Miss Montana’s allegations.

“I’m open to talking to her about it,” she said of O’Keefe, who spearheaded the social media whistleblowing. “I would love to communicate with her because I think there’s a lot of allegations coming up that aren’t true.”

In an exclusive with E! News, Gabriel denied allegations that the competition was “rigged.”E! News

Meanwhile, Miss Montana was joined by an onslaught of other contestants — from past and current years — who made similar allegations, sharing their experiences via social media.

“I am lost for words,” Miss New York Heather Nunez wrote on her personal Instagram story. “The way I entered this pageant and gave it every last bit of my heart and soul … We were humiliated, thinking we entered something with a fair chance.”

While she added that her goal is not “to create a sob story,” she’s speaking up “to prevent future contestants from feeling the way” she does.

“For all the little girls who watch Miss USA with the same dreams I had of working hard to be in that position,” she wrote. “You deserve a fair chance.”