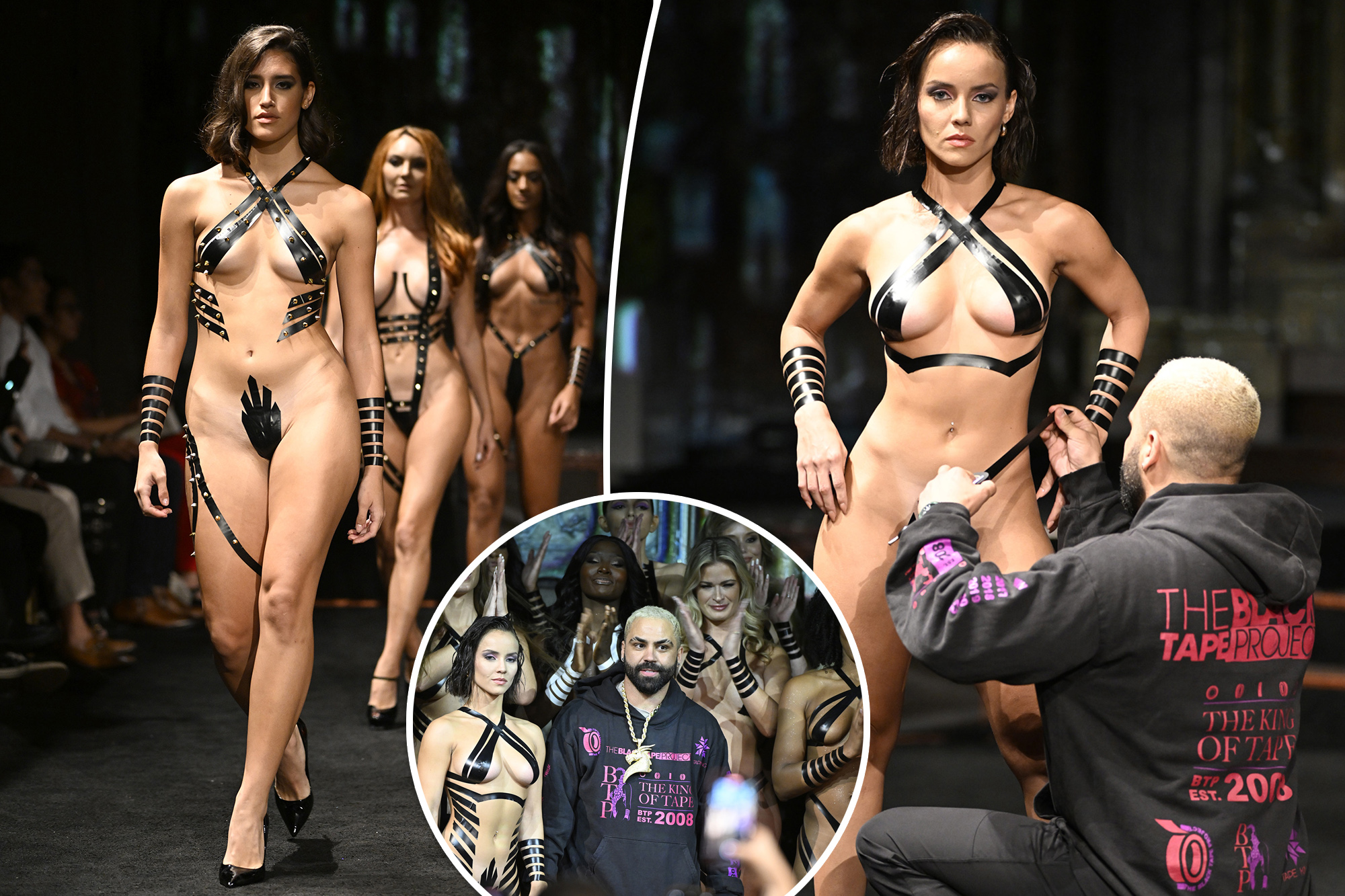 They were hot and sticky.

The hot and sticky showcase was part of the sold-out The Black Tape Project, an unconventional sartorial initiative dreamt up by self proclaimed body tape “pioneer” Joel Alvarez.

The so-called “King Of Tape” premiered his latest line of tape-based swimwear at the Angel Orensanz Center in Manhattan Sunday night, mesmerizing audiences with his minimalist designs.

One of the models bodies’ was crisscrossed with spike-studded black tape — a salacious take on the dog collar design– with black X’s acting as pasties. Others had their lady parts obscured by nothing but a skimpy tape “flower” that was unattached to the rest of the getup.

The sticky swimwear was the brainchild of the Black Tape Project founder, Joel Alvarez, who uses a smorgasbord of different adhesives to create swanky yet Spartan beach attire.
Getty Images

Some of the models had only a few pieces of tape concealing their netherregions.
Getty Images

A model walks the runway in her NSFW couture.
Getty Images

In order to prevent discomfort — and perhaps an inadvertent bikini wax upon removal — Alvarez claims he uses “only skin-safe artistic body tape” in his clingy couture.

Per the Black Tape Project’s website, the unconventional patterns were inspired by an encounter the designer had while working as a rookie fashion photographer in 2008. The budding designer was reportedly working with a model who “suggested I use electrical tape on her for the last look,” he said.

While Alvarez initially had no idea why she’d want to do this, he decided to oblige by wrapping her in black electrical tape, he recounted of his maiden bikini design.

“Mind you, she looked like two Christmas hams wrapped in rubber bands when I was done!” mused the fashionista, who currently boasts over 630,000 followers on Instagram.

Fast forward a few years and it appeared that Black Tape was sticking around. By 2012, the tape maven began selling his “creative services to local night clubs in Miami” and now showcases his designs at venues across the globe, per the fashion firm’s website.

Alvarez even allows aspiring fashionistas to try out the designs on themselves: He sells rolls of adhesive on the Black Tape Project’s website, where they cost from $9.99 for black body tape to $29.99 for other colors.

“I am focused on teaching and educating others by encouraging the world to try this new genre of body art with a collection of our own skin safe body tape that I have curated from my own projects in the past,” he writes on the site. “This is the same tape that I use every day for my live performance designs and that you see in my portfolio.”