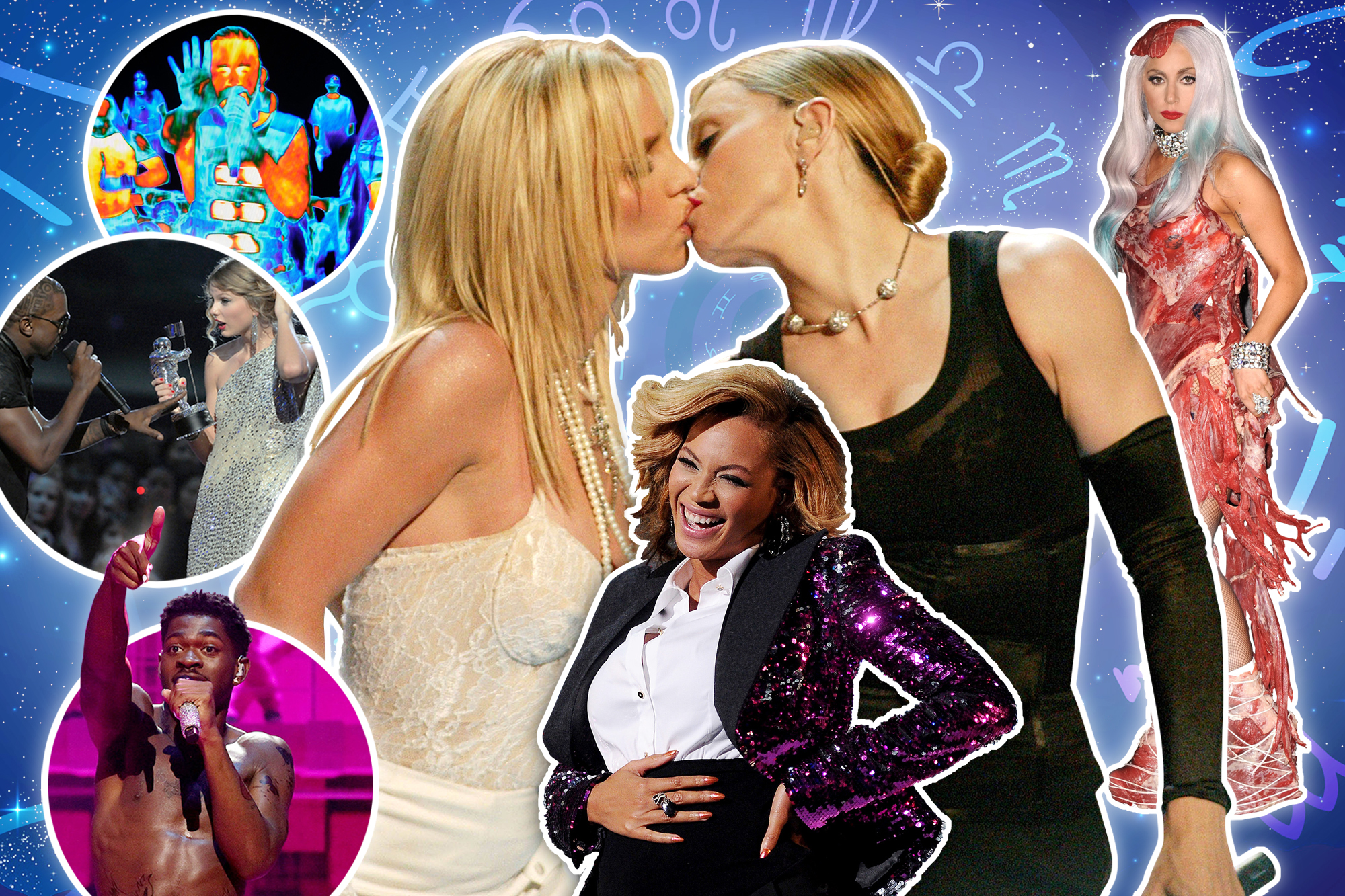 Video may have killed the radio star but it birthed some of the music industry’s most iconic moments.

The tagline for a recent MTV VMA Awards was “Everything Might Happen,” and since the show’s inception in 1985, almost anything and everything has including the delivery of history making performances, celebrity feuds and incendiary fashion, making it much watched and widely talked about.

In celebration of this year’s awards ceremony we have paired the zodiac signs with an iconic VMA moment that best expresses their astro energy. From onstage make outs and acceptance speech interruptions to verbal fisticuffs, inflatable a**es, meat dresses and flying compacts, here are the 12 most iconic, memorable and talked-about moments from the MTV VMAs according to the zodiac sign that blessed us with their starry presence.

Statement making, pot stirring, revolution inciting Aries energy finds a welcome home at the VMAs. Ram regent Lady Gaga encased herself in 40 pounds of Argentinian beef and enshrined herself in our collective memory in 2010 when she arrived at the ceremony in her now infamous meat dress. For Gaga, the choice was about assertion than aesthetics. As she later explained to Ellen DeGeneres, “If we don’t stand up for what we believe in and if we don’t fight for our rights, pretty soon we’re going to have as much rights as the meat on our own bones. And I am not a piece of meat.” Other notable Aries moments include Lil Nas X’s incendiary 2021 performance and fellow ram Diana Ross playfully bouncing Lil Kim’s teet onstage in 1999.

Bull queen and beacon of body positivity, Lizzo performs at the 2019 VMAs. WireImage

Taurus rules the second house of values and possessions, a manse that includes the concept of self-worth. Our blessed bull queen Lizzo stayed true to the highest expressions of her sign; healthy hedonism and unabashed acceptance during her 2019 VMA performance. Framed by an undulating inflatable a** and flanked by dancers of all body types, Lizzo swigged tequila from a bedazzled bottle, and urged her audience to love themselves, giving them permission to “feel good as hell.” It was body positive, it was bottles up, it was joy as the means to resist systems of oppression and it was a pure Taurus triumph.

Geminis like Kanye West can’t keep what they’ve got inside or in mind, to themselves.FilmMagic

Ruled by controversial, conversational planet Mercury, Geminis have a notoriously hard time biting their tongues and a reputation for speaking too soon, too often, and/or utterly out of pocket and mind. May I present Gemini artist/professional maniac Kanye West who made history when he hijacked Taylor Swift’s acceptance speech in 2009 to argue that Beyoncé was a more deserving winner. He might have been right about that fact, but his approach was 100 versions of wrong. It was the mic grab that launched a 1,000 memes and one very memorable celebrity feud.

Cancer queen Courtney Love crashed Madonna’s post VMA interview by throwing her makeup compact at the material girl. When she was invited to join the party, Love, in a leather mini dress uttered the words that may as well be stitched on the daily flag flown outside of the sandcastle of all crabs, “I’m sorry I insulted you, I was in a bad mood.” Perhaps under the influence of drugs or the lingering musk of Madonna, Love concluded the interview by falling face forward..

Leos like Madonna can survive on a diet of attention and applause.FilmMagic

Leos like a spotlight and a challenge, a point made tirelessly by lion queen Madonna. Self-possessed to outdo her own controversy courting, stage writhing performance of “Like A Virgin” from the inaugural VMAs ceremony, Madge enlisted Britney Spears, Christina Aguilera and Missy Elliott to join her onstage for a 2003 homage to the original. Jaws dropped and tongues touched when Madonna, dressed as a groom, planted a ceremonial mouth kiss on both Spears and Aguilera.

Virgo Beyoncé announces her pregnancy on stage in 2011.Getty Images

True to her sun sign, Virgo vanguard Beyoncé does nothing without strategy and style. At the 2011 VMA’s a visibly glowing Mrs. Carter performed a rendition of “Love On Top” and signed off by unbuttoning her sequin tuxedo jacket to reveal the baby bump that was to become Blue Ivy.

Libras are suckers for a pretty face and a press opportunity. Symbolized by the scales and balances, the sign is synonymous with partnership and the institution of marriage. Enter Libra Nick Cannon in a sparky belly shirt at the 2021 VMAs. So taken was our man with the staggering sight of fellow Libra Ashanti in a black cut out dress that he got down on bended knee and white harem pant to propose marriage.

Scorpio Drake professes his love to Rihanna in 2016.FilmMagic

In 2012, our young Scorpio king Drake won his first VMA for “HYFR.” In his acceptance speech Champagne Papi, hallowed be thy name, made a heartfelt dedication, “The video, it’s about being me. Being black and Jewish. I went to this house party one time… I ended up getting made fun of. I want to dedicate this award to any kid that’s ever had a long walk home by yourself, you know what I’m saying? This is to you man for real. We made it.” In 2014 Drake won the VMA for “Best Hip-Hop Video” but didn’t attend the ceremony and instead, like a true boss, had his former nemesis Common collect his award. In 2016 he used the stage to proclaim his undying affection for Rhianna. Standing tall as proof that life exists beyond bullying, beef is meant to be buried and love is forever, Drake is an apex arachnida.

Sagittarius is a sign synonymous with truth telling; whether they are seeking it or speaking it from aloft a soap box or stage, archers do not mince or mute their opinions. For evidence look no further than 2022 Vide Vanguard honoree Nicki Minaj. When Minaj won the award for Best Hip-Hope video in 2015, she took the opportunity to call out host Miley Cyrus with whom she’d been engaged in a Twitter/press fueled tete de tete about the real problem of representation and equality for female artists of color. Minaj, looking equal parts fine and fierce fired an arrow with, “And now, back to this b***h that had a lot to say about me the other day in the press the other day. Miley, what’s good?” Direct, unapologetic and perfectly in keeping with her sun sign.

Capricorns, ruled as they are by stern planet Saturn, often lead with a serene seriousness that makes them authoritative parents, noble leaders, successful CEOs and the right choice to speak about and upon somber matters. This was the case when sea goat singer/actor Jared Leto was charged with paying tribute to late musicians Chester Bennington and Chris Cornell at the 2017 VMAs. Leto gracefully and tenderly saluted his friends while also urging anyone suffering with suicidal ideation to seek help and find solace in the knowledge that they are not alone and the best is yet to come.

The Weeknd, an Aquarius, performs from atop a skyscraper in 2020.Getty Images for MTV

Riding the line between convention and chaos is Aquarius and water bearer The Weeknd brought us both during his 2020 performance of “Blinding Lights.” Emotionally aloof and mentally boundless. Aquarians are often accused of viewing the world through a remote, cerebral lens. Our boy took remote to new levels and performance to new heights. With a bandaged face, high above the most populous city in America, he sang a song about loneliness with only a circling helicopter, strobe lights and a ridiculous fireworks display for company. Weird, poignant, entertaining and a little bit sad it was a moment of crystalline Aquarian catharsis.

Pisces Justin Bieber is brought to tears in 2015.Getty Images

It’s overwhelming to be a Pisces, folks; treading water in your own tears and the undertow of everyone else’s emotional detritus takes its toll. The taxation was evident in 2015 when Pisces Justin Bieber performed “What Do You Mean” on the VMA stage. Dressed like a skate park ninja, the Biebs led a searing dance routine and levitated above the crowd before doubling over with tears of gratitude, a pretty typical Tuesday on the town for a Pisces.

Astrology 101: Your guide to the stars

Astrologer Reda Wigle researches and irreverently reports back on planetary configurations and their effect on each zodiac sign. Her horoscopes integrate history, poetry, pop culture and personal experience. She is also an accomplished writer who has profiled a variety of artists and performers, as well as extensively chronicled her experiences while traveling. Among the many intriguing topics she has tackled are cemetery etiquette, her love for dive bars, Cuban Airbnbs, a “girls guide” to strip clubs and the “weirdest” foods available abroad.