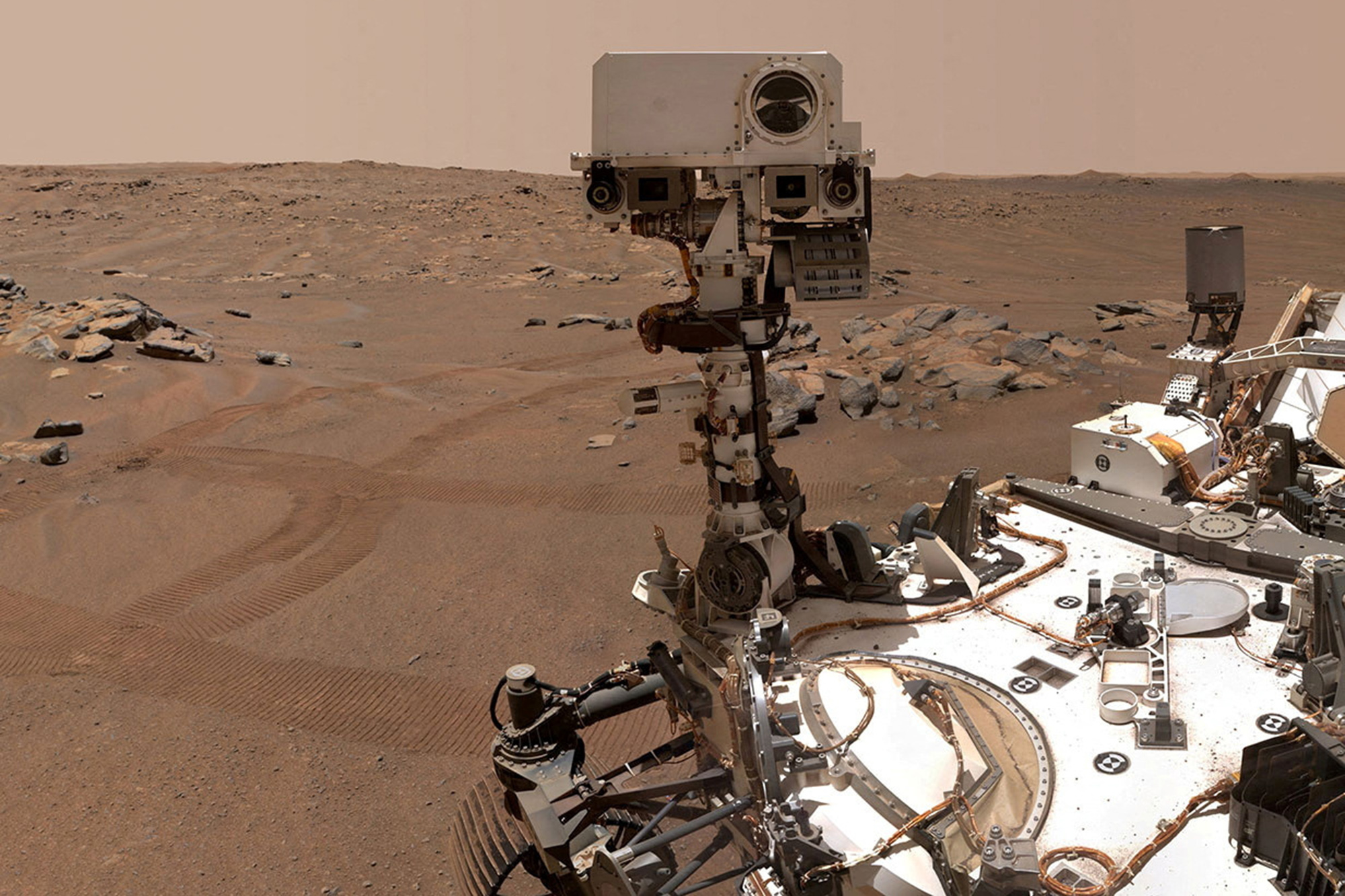 NASA scientists said Thursday the Mars Perseverance rover found biologically-interesting rocks in an ancient lake bed that could indicate microbial life existed on the red planet billions of years ago.

After launching from Cape Canaveral, Florida, in July 2020, NASA successfully landed its second rover, Perseverance, on Mars in February 2021. Along for the ride was a 4-pound helicopter named Ingenuity that has been a wild success showing controlled flights can be made on Mars.

Since its touchdown, Percy has been roving around on the site of a dried-up ancient Martian river delta known as the Jezero Crater. The robot has seven science instruments, including cameras and two microphones that recorded the sounds of wind on Mars and its landing.

On Thursday, mission managers provided an update on what the rover had discovered while exploring 8 miles of the Jezero Crater. The area was likely a lake more than 3.5 billion years ago, which is why NASA landed the rover there, to search in an ancient habitable environment for evidence of life.

“This mission is not looking for extant life things that are alive today,” Ken Farley, Perseverance project scientist, said. “Instead, we’re looking into the very distant past when Mars climate was very different than it is today, much more conducive to life.”

In more than 550 Sols, or Martian days, Farley said Perseverance has found that the history of the crater floor is more complicated than expected. Based on the findings of ingenious rock formed from volcanic activity, the science team now believes before holding a lake bed, the crater had some active volcanic activity, even a lava lake.

Rocks to be excited about: Wildcat Ridge and Skinner Ridge

Scientists said several rock samples collected on Mars contain organic molecules associated with life. Two rock samples, in particular, were collected from rocks the team has named Wildcat Ridge and Skinner Ridge, which have the science team excited. The stones were named after trails in the Shenandoah National Park.

The rocks, about 66 feet (20 meters) apart, offered very diverse samples, but each with a high science value, said Perseverance sample return scientist David Shuster. However, both samples have something in common.

“Both of these rocks are composed of sediments that were transported by liquid water,” Shuster said, adding both rocks experienced alterations involving water. “Thus, these rocks formed and record indications of a habitable environment.”

Using the rover’s instrument called Scanning Habitable Environments with Raman & Luminescence for Organics & Chemicals, or SHERLOC, to analyze the area where the rover collected the samples, the team found the highest concentration of organic matter yet during the mission. Organic matter, considered the building blocks of life, can be created through processes that involve life but also other circumstances, like geologic activity, not involving life.

“If this is a treasure hunt for potential signs of life on another planet, organic matter is a clue. And we’re getting stronger and stronger clues as we’re moving through our Delta campaign,” Perseverance SHERLOC instrument scientist Sunanda Sharma said. “I personally find these results so moving because it feels like we’re in the right place with the right tools at a very pivotal moment.”

The samples are about the size of a pinky and are stored in tubes until a follow-up mission can pick up the Martian rocks from Perseverance in 2030.

What’s ahead? A critical robotic handoff

The rover’s biggest job is still to come.

To bring the first samples from Mars back to Earth, NASA and the European Space Agency have an elaborate plan involving a fleet of robots, including the Perseverance rover, a new Martian lander, a sample-catching spacecraft and two tiny helicopters.

The two space agencies simplified the original Mars sample return campaign mission, removing a sample fetch rover and its associated lander. NASA and ESA managers said they changed the plan because of the expected longevity of Perseverance, and the Ingenuity helicopter’s success, which has now completed 29 flights on Mars.

NASA Science Mission Directorate Associate Administrator Thomas Zurbuchen said the plan was always to have two methods of getting the samples back to Earth, using Perseverance or another rover for the handoff.

Instead of an additional rover, the plan is to use two tiny helicopters as the backup option and Percy as the primary. The rover is the primary means to get the samples to the Sample Retrieval Lander, which will carry the Mars Ascent Vehicle and ESA’s robotic transfer arm.

Percy will also deposit a sample cache in the river delta as an “insurance policy” option before moving on to more ancient terrain on Mars. Future missions could pick up those samples.

NASA and the European Space Agency have plan involving robotics for bringing the rock core samples back to Earth.NASA via

The ultimate goal is to get the first Mars soil and rock samples back to Earth for a detailed analysis.

Sharma said bringing the rock cores back to Earth is the surest way to confirm the organic matter the science team believes it has found in the Mars rock samples.

“Obviously, the instruments that we have in the rover are extraordinary, and the fact that we can make these observations of organic molecules on Mars, to begin with, it is just awesome,” Sharma said. “But it’s really the level of detail spatially that that will be different here on Earth.”

NASA’s head of planetary science, Lori Glaze said what the rover has found so far tells the team they picked the right spot on Mars to explore.

“Just the complete body of work that’s been completed by this incredible Perseverance team to date tells me that we not only went to the right place, but we sent the right spacecraft with the right science instruments to explore this amazing ancient environment on Mars,” Glaze said.

Over the next few months, Perseverance will explore an area known as the Enchanted Lake to collect more samples.

Reply to Comment what we should talk about next! ...
'The Crown' stars Claire Foy, Olivia Colman honor the Queen