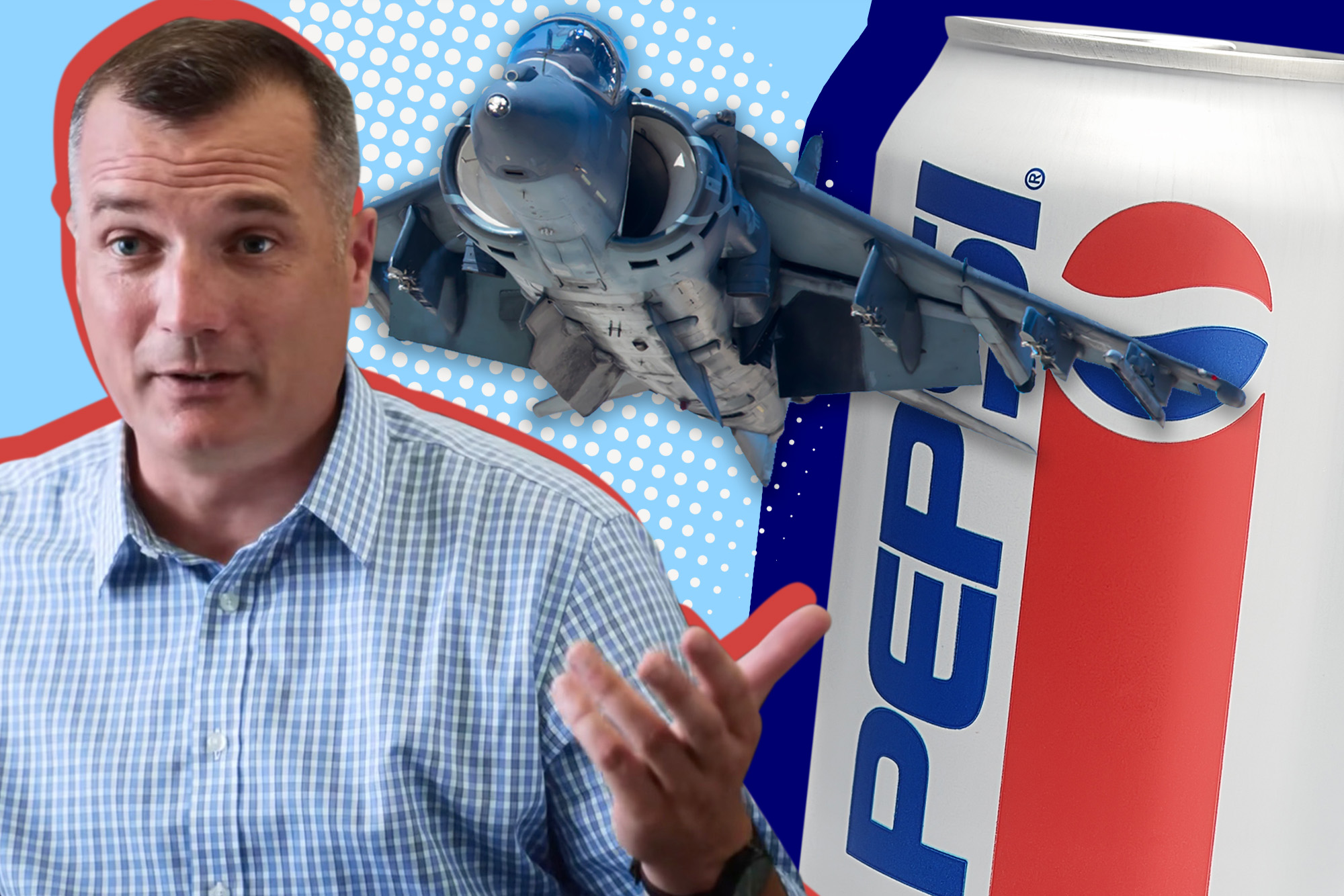 In 1995, John Leonard was a 20-year-old college student near Seattle, coaching little league football on the side and dreaming about a future in business. Then, an empty soda bottle changed his life forever.

Leonard’s unusual journey is the subject of the new Netflix documentary series, “Pepsi, Where’s My Jet?” premiering Thursday. It looks at how he soared against one of the biggest corporations in the world over an outlandish offer made in a television commercial.

During the mid-1990s, the cola wars were running hot. In a bid to get jaded Gen Xers to choose it over Coca-Cola, Pepsi introduced the concept of Pepsi points, which could be redeemed for merch. After years of lofty slogans, the advertising was suddenly surprisingly blunt: “Drink Pepsi, Get Stuff.”

A fountain drink got you one point, a 2-liter bottle was two points, and a 12-pack was worth five points. Prizes included baseball caps (60 points) and T-shirts (80 points) with a few big ticket items like mountain bikes (thousands). One upbeat television ad went so far as to advertise that a military grade Harrier jet could be had for a whopping 7,000,000 points.

The comical commercial didn’t feature any sort of disclaimer, fine print or legal notice telling viewers it was all a joke. Leonard became obsessed with actually getting enough points to get the fighter jet.

“I started thinking, geez, how could you actually make this work,” Leonard said. “But I can’t make it happen. And I have had to find a crazy partner in the deal. And luckily, I happen to know somebody that fit the bill.”

John Leonard had a pie in the sky idea to sue Pepsi over a military jet he thought was promised through a promotion.

He rang up Todd Hoffman, a longtime friend who’d already enjoyed considerable success in business. The two had met on a mountain climbing expedition, and Hoffman considered himself something of a professional mentor to Leonard. When the younger man declared his Pepsi ambitions, Hoffman said he was in.

He said he’d help him get the jet, and together they’d start a company to lease and rent out the plane for air shows, film shoots and other events. To make sure their ambitions were kosher, Leonard hopped on the phone to Boeing and the Pentagon, asking — under the guise of a school project — if a civilian could actually own a Harrier jet.

Chief Pentagon spokesman Ken Bacon told the young entrepreneur that as long as the aircraft was not armed nor had radar jamming technology, the answer was yes.

Hoffman had Leonard draft a detailed business plan, and they set to work. Actually racking up the 7 million proved to be nothing short of an ordeal.

John Leonard’s plan had been financed by his close friend Todd Hoffman.Courtesy of Netflix

Leonard’s first idea was a bottle deposit racket requiring six warehouses, multiple trucks, and a team of drivers to purchase and store the bottles over a period of months. The estimated cost was $3.4 million and would require 16M beverages. Hoffman sent his young protégé back to the drawing board.

Then, while browsing a Pepsi catalog in a convenience store near his home, Leonard found a loophole, down in the fine print. Pepsi Points, it said, could be purchased for ten cents apiece.

Just like that, Leonard’s plan finally –and simply — grew its wings.

John Leonard was determined by all means to get his Harrier jet from Pepsi.Getty Images/iStockphoto

All that stood in the way of his dream now was a check for $700,008.50 — the specific number taking into account the handful of Pepsi Points the two had already accrued — which Hoffman happily wrote.

After weeks of anxious waiting, the check was returned in the mail with a note from Pepsi headquarters, telling the pair that the inclusion of the Harrier jet in the commercial was nothing more than a joke. For their trouble, they were given a fistful of coupons for free soda.

Neither Leonard nor Hoffman were inclined to take no for an answer. They recruited Miami lawyer Larry Schantz to send a letter that demanding Pepsi make good on their arrangement.

Schantz hadn’t even gotten around to dropping the letter in the mail when, in 1996, the soda giant filed suit in New York, asking the court for a declaratory judgment stating that it had no obligation to provide Leonard and Hoffman with a Harrier jet.

The offer, Michael Avenatti, and a trial

Lawyer Larry Schantz was recruited by Leonard and Hoffman to sue Pepsi.Courtesy of Netflix

Schantz scrambled, immediately issuing a countersuit, with the simple argument that Pepsi was obligated to produce the jet as stated clearly, given that there was no fine print or disclaimers in their commercial.

Simultaneously, the company began showing signs of insecurity in its ad. In the docuseries, Michael Patti, then a creative director at BBDO Worldwide, the ad agency that created the campaign for PepsiCo, revealed that worried executives asked him to revise the commercial twice.

The first time, they changed the number of points needed to secure the free jet from 7,000,000 to 700,000,000 — the more absurd number Patti said he originally proposed. The second revision saw the now sky-high number followed by a parenthetical “Just Kidding.”

The original commercial had been modified twice by Pepsi after Leonard demanded his jet.Pepsi via YouTube

The changes, Patti says, were “an admission of guilt.”

Soon after, Pepsi offered Leonard and Hoffman a settlement of $750,000, but Leonard said no. He wanted that damned jet.

“Now, sure, [I would have settled],” Leonard said. “But I still get a kick out of the fact that I had the chutzpah at that time to actually come to that conclusion. Probably wasn’t the smartest decision I’ve ever made in my life.”

In hindsight, John Leonard says probably should have taken the offer from Pepsi.Netflix

A young hot shot lawyer-to-be named Michael Avenatti joined their cause, handling media relations for the case for a short time.

“I thought we could get the jet,” Avenatti says in the documentary. “We were gonna have to bring public pressure, by way of some aggressive public relations actions. A full court press with the media.”

Ultimately, a judge rules in favor of Pepsi, saying no reasonable person would think a Harrier jet was attainable by claiming Pepsi reward points.

Michael Avenatti helped out John Leonard during his legal battle with Pepsi.Netflix

“The judge came down with this kind of snarky ruling — arrogant, hubristic,” said Hoffman.

While they didn’t get their jet — or a fat settlement — Leonard and Hoffman did make an impact, leading to an era where disclaimers are an integral part of many commercials.

“Twenty five years later, everybody’s studying this at law school,” director Andrew Renzi told The Post. “You could argue that this might have been the biggest thing to happen in the cola wars. Advertising changed forever.”

Both John Leonard and Todd Hoffman remain close to this day.Courtesy of Netflix

John Leonard would stop at nothing to win his Harrier jet from Pepsi.Netflix

Hoffman is retired and has been battling cancer since the fall of 2021. He’s planning a five-week trip to India soon where he’ll do nothing but explore and adventure.

Leonard now lives in Washington, DC, with his wife, two children and a third on the way. He oversees law enforcement and emergency services for the National Parks service.