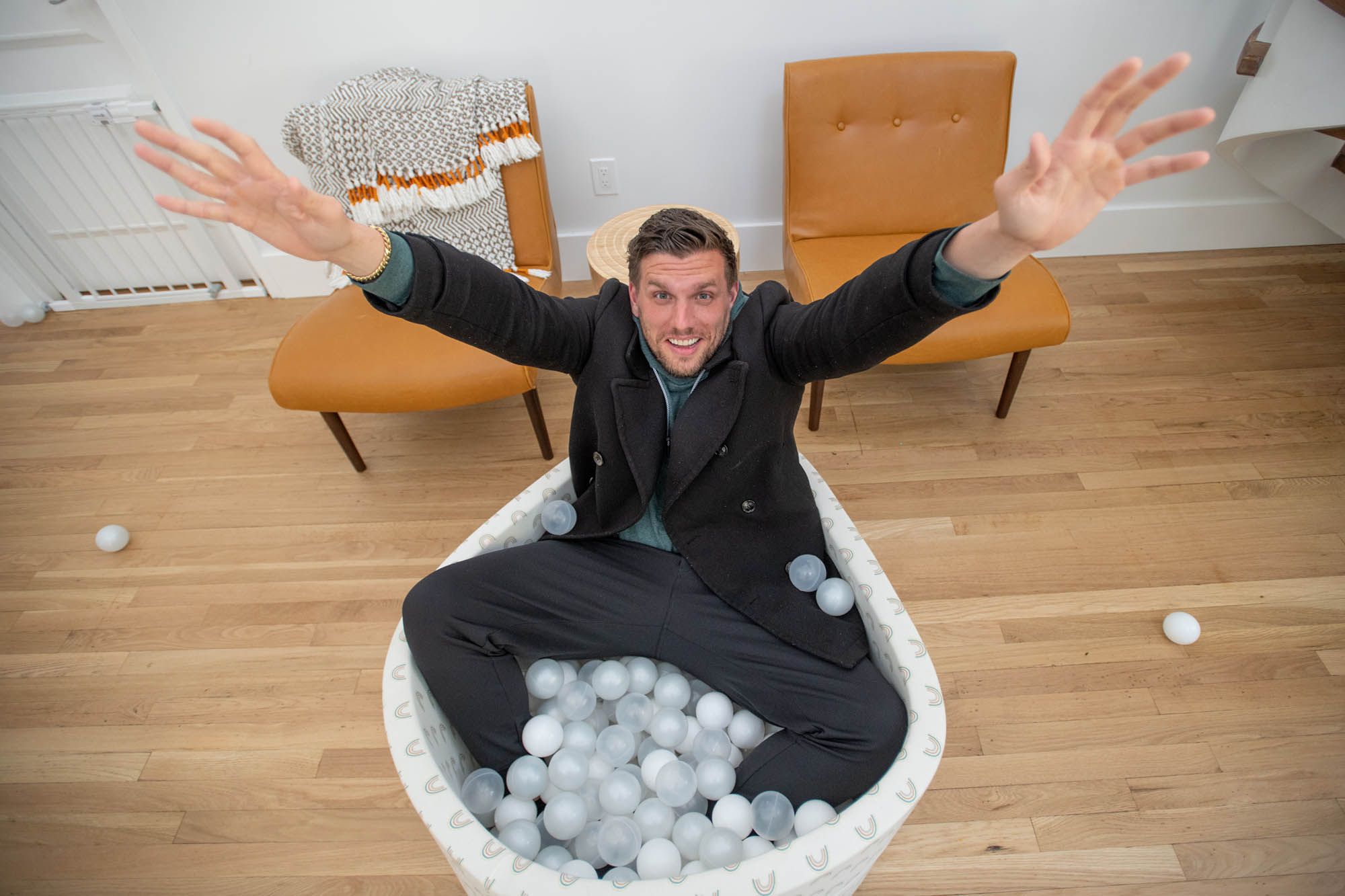 Ridgewood, Queens-born comic Chris Distefano — who was once fired from Netflix for making an insensitive joke — returns next month to the network with a new special that may get him “cancelled” again.

“Speshy Weshy”, filmed at the Gramercy Theatre and airing May 3, includes the 37-year-old funnyman riffing on woke topics and recounting the backlash he gets on social media for “being part of the grey-zone silent majority.”

Distefano didn’t start standup until he was 26, quitting his job as a pediatric physical therapist to take the plunge.

Four years later, he met his now-girlfriend Jasmin Canuelas — who is of Puerto Rican descent and from Sunset Park — at the now-shuttered watering hole Place to Beach on Coney Island. The two have two daughters Delilah, 6, and Violette, 10 months, and live on Staten Island.

Being on stage is where he has the least amount of agita — but he’d never try to break into the industry today.

“Doing comedy now … things get so PC,” he said. “There has to be one group of people that can step up to the line or cross it.”

We asked the comic to give his take on these topics:

I never really was into weed until recently. On my “Chrissy Chaos” podcast on Patreon, I do a segment every Friday called the “Chris and Eddy Show” ’cause I call edibles “eddys,’ so I take an eddy and I do a show. It’s a different version of myself because I just get high and talk about God knows what. So I’m actually happy that I can buy edibles in New York soon so I don’t have to smuggle them onto airplanes and worry about being locked up abroad.

Distefano said that things in comedy “get so PC.”J.C .Rice

Removal of the Teddy Roosevelt statue

Once you have children, you realize it’s exhausting to try to pull down a statue of Teddy Roosevelt. I’d rather just teach my kids the good things he did and the bad things he did and we could just go and take a walk in Central Park. I feel like people need to start having sex again and … start having more kids. Because I’m exhausted as a parent, so I don’t have the energy to make a difference. Now people want to delay having kids ‘til they’re 50 … that’s your right, but the byproduct of that is now you wanna rip down statues. Like stop, dude, go feed your kid. One of my friends who’s like woke, he was like, ‘I can’t believe you’re not coming to the protest.’ I was like, ‘Dude, you’re going Wednesdays at 3 o’clock.’ At that point I was doing Zoom swim classes with my daughter; we were filling up a bathtub. I support the cause but I can’t go, dude. You can go cause all you do is have three cats.

I had tweeted, ‘Biden should just make AOC the head of the CIA because nobody’s looking through phones like Puerto Rican women.’ You gotta see the women in my family, they’re all up in my phone. And some white guy, Ryan, I think he’s from Idaho, was like, ‘That tweet is so offensive.’ I was like, ‘Dude, shut up. Go eat a potato.’

Andrew Cuomo blaming being overly affectionate on his Italian heritage

First of all I’ve never seen someone go from hero to zero quicker than f–king Cuomo … Listen, do Italian people get handsy and kiss a lot, sure. My father might try to kiss Derek Jeter on the lips, but he’s not gonna try to kiss some random girl who works for him.

Distefano didn’t start standup until he was 26.J.C. Rice

I thought from day one mandating anything was a mistake … If you want to wear 10 masks, a face shield, a helmet, do what you gotta do, babe. No problems for me. But just allow me to make my own decision. Even the most left-leaning friends I have are like, ‘Yeah, we’re done with the masks.’ Because the only people who are afraid are the people who are the most protected. They have 19 vaccines, 17 boosters … It’s like, ‘Well that’s your own mental health issue. Don’t put that s—t on me.’

What I want, being a parent now, is like teach my kids reading, writing and arithmetic and let me do all the other stuff. Let me tell them about sexuality and gender. I don’t need some teacher who I don’t know, who I didn’t handpick, to be teaching my kids about deep-rooted issues like that. That’s a job of a parent.

If you’re over 40 and you have a New York sports logo tattooed on your body, I know one thing and one thing only — you’re divorced … because there’s no way your wife was gonna let you do it and it is grounds for divorce if you do do it. Now, with that being said, I was at the Yankee game the other day and they put me up on the Jumbotron and I bombed, nobody clapped, but whatever, that’s besides the point … I said if Anthony Rizzo and Aaron Judge prove to me that they watched my comedy special, I will get the New York Yankees’ logo tattooed on my lower back and I’m a man of my word.

If you go out and cancel someone, you’d better be squeaky f–king clean because when that light gets shown back on you, you’re gonna see some dirt.