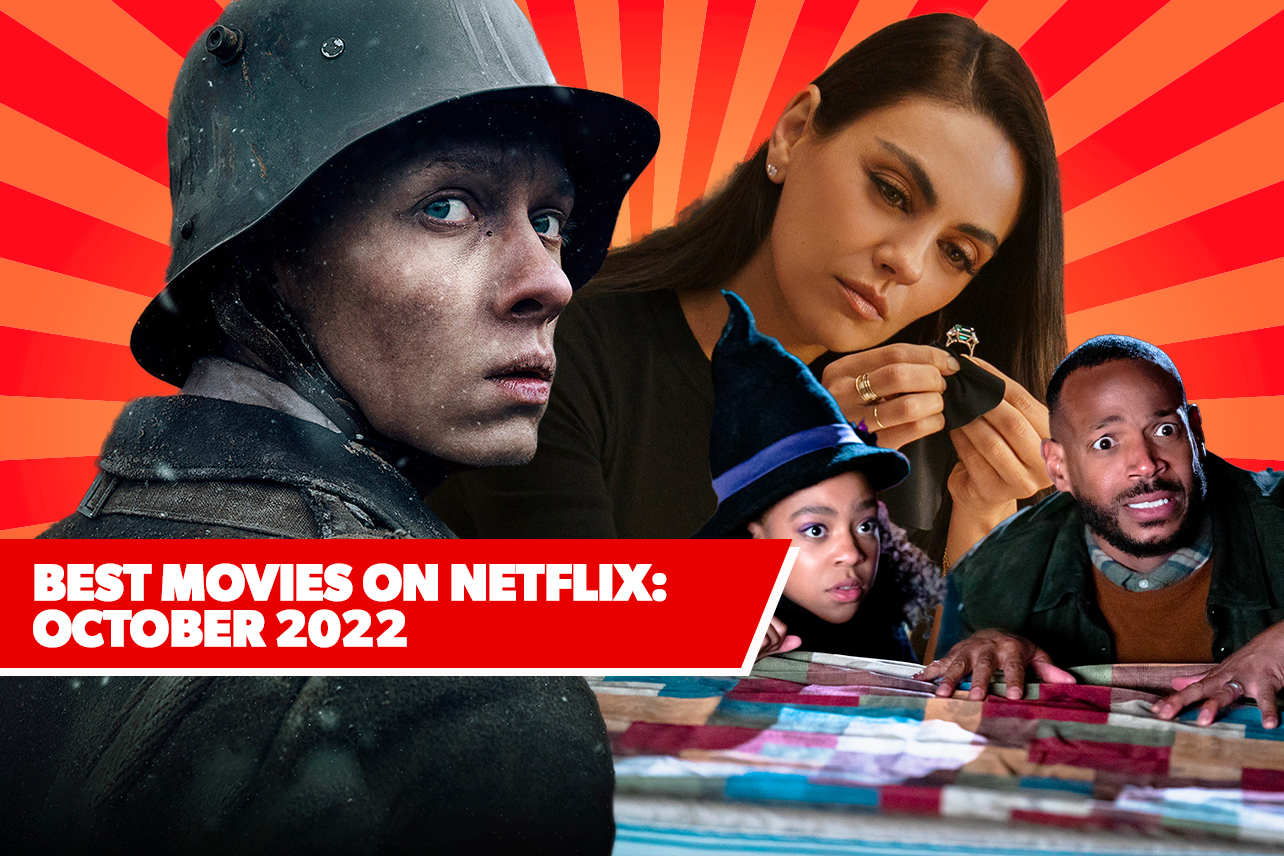 It’s no trick that Netflix is treating everyone with some seriously sweet films and specials all October long to carry us through the Halloween season. This month, Netflix is welcoming in a whole array of terrific titles that will do everything from take your breath away with immersive action and drama to raise your pulse with their spine tingling seasonal programming, and more. Whether you’re looking for something otherworldly, informative, or romantic, Netflix has got you covered. Keep reading for the streamer’s best new movies coming this October.

Moving further into the month, the platform is debuting even more original titles to beef up their already-stacked catalog of hits. Mid-October releases like The School for Good and Evil and LiSA Another Great Day in particular are highly-anticipated releases with big-name stars from all over the world and unforgettable stories that are sure to make them stand-out films destined for the Netflix Top 10. Then rounding out the month are titles like The Good Nurse and All Quiet on the Western Front, which are sure to get people talking.

If you’re looking for Netflix Originals to really get you in the Halloween spirit, be sure to check out scary good titles like The Curse of Bridge Hollow, Wendell & Wild, and Mr. Harrigan’s Phone, which all premiere on the platform throughout the month.

Want to know what other eye-grabbing movies are dropping on Netflix in the next month? Keeping scrolling to check out our full list of what movies to watch on Netflix in October.

The School for Good and Evil is a Paul Feig-directed fantasy film that is based on Soman Chainani’s 2013 novel of the same name. This Netflix Original revolves around misfit best friends Sophie (Sophia Anne Caruso) and Agatha (Sofia Wylie) as they find themselves on opposite sides of an intense battle after being kidnapped and taken to the titular enchanted educational institution that trains aspiring heroes and villains to protect and enforce the world’s tenuous balance between Good and Evil. With their friendship put to the ultimate test, Sophie and Agatha must survive the fairytale adventure they’ve been pulled into in order to find a way to come together and safely return home.

Stream The School for Good and Evil on Netflix

Get ready to feel your heart race as you immerse yourself in this intense Netflix Original mystery thriller film starring Mila Kunis. Luckiest Girl Alive revolves around sharp-tongued New Yorker Ani Fanelli (Kunis), who seems to lead the perfect life as an accomplished writer soon to enjoy her dream wedding in Nantucket. But when the director of a true-crime documentary contacts Ani to get her side of a harrowing trauma that occurred while she was a student at the prestigious Brentley School, Ani’s dream life begins to unravel into an absolute nightmare.

Speaking of spine-tingling stories and true-crime, The Good Nurse is a Netflix Original crime-drama based on Charles Graeber’s 2013 biography The Good Nurse: A True Story of Medicine, Madness, and Murder, and tells the story of a deadly mystery that unfolds in an ICU. Amy Loughren (Jessica Chastain) is struggling to stay afloat while juggling being a single mother and struggling with a threatening heart condition with her emotionally and physically demanding night shifts working as a nurse at the ICU.

Her savior comes in the form of Charlie Cullen (Eddie Redmayne), a fellow nurse who comes to Amy’s aid in her unit with empathy and conscientiousness, and their long nights working together spark a deep and solid friendship. But when a string of inexplicable patient deaths point to Charlie as the lead suspect, Amy is forced to risk both her own and her children’s safety to reveal the truth and prevent more lives from being lost.

Stream The Good Nurse on Netflix

If you want to feel some fear this October but through slightly less supernaturally spooky means, then you may want to watch All Quiet on the Western Front, which is based on Erich Maria Remarque’s 1928 bestselling novel of the same name, and delves into the everyday horrors of war at its most raw and brutal moments. The German-language Netflix Original anti-war epic begins in 1917, when young German man Paul Bäumer (Felix Kammerer) lies about his age so that he can enlist alongside his friends to fight on the Western Front of World War I.

While Paul and his friends join with their heads full of romanticized patriotic notions of battle and hopes of heroism, they are quickly confronted by the harsh reality of life in the trenches, and just how underprepared and uninformed they are when it comes to what they need to do and know to survive the war.

Stream All Quiet on the Western Front on Netflix

Descendant is a Netflix Original documentary that follows filmmaker Margaret Brown’s attempts to capture the search for and discovery of The Clotilda, the last known slave ship to arrive in the United Stated in 1860, bringing illegally enslaved Africans to Alabama. Following the 2019 discovery of the ship’s remains, the film focuses on the descendants of those originally aboard the ship now residing in the historic site of Africatown, just a few miles outside of downtown Mobile, Alabama.

Descendant offers a moving look at the community and its attempts at healing as it undergoes an ongoing fight to reckon with the past and preserve the legacies and heritages of their ancestors, all while considering what it truly means to achieve justice.

Inspired by Chiara Parenti’s 2018 novel of the same name, Jumping From High Places tells the moving and inspiring tale of Sole (Federica Torchetti), a young woman who suffers from anxiety so severe it prevents her from living life on her own terms. But after her best friend’s death, Sole decides to honor her friend by dedicating herself to facing and overcoming each of her fears, launching a journey towards fulfillment, self-empowerment, and finding love. For those looking for something other than a scary movie to watch this October, this Italian romantic comedy-drama film is a must-watch.

If you’d like to get into the Halloween spirit but have a low tolerance for thrillers and horror, then The Curse of Bridge Hollow is the movie for you. Led by Stranger Things actress Priah Ferguson, this Netflix Original family adventure-comedy follows teen Syndey (Ferguson), who accidentally releases an ancient and mysterious spirit on Halloween. In order to save the town from the scary seasonal decorations that the spirit has brought to life to wreck havoc, Sydney must join forces with the very last person she wants to be hanging around with as a young adult coming into her own… her father (Marlon Wayans).

Stream The Curse of Bridge Hollow on Netflix

Learn something new this October (or at the very least, relive the excitement and glory of a familiar story from a fresh angle) with Netflix Original documentary The Redeem Team. You don’t have to even be a sports fan to find this film a total slam dunk. Prepared to be immediately pulled in by exclusive footage and unparalleled access to some of the greatest basketball stars in recent history of the game all in one place as we follow the US Olympic Men’s Basketball Team’s journey to the gold medal at the 2008 Beijing Olympics after their shocking third place finish at the 2004 Athens Games. Bolstered by interviews from members of the original team and coaching staff (like Dwayne Wade, LeBron James, and Mike Krzyzewski), The Redeem Team gives viewers a thrilling inside look at what it takes to make an epic comeback and build up the best basketball team in the world.

Stream The Redeem Team on Netflix

Legendary comedy duo Keegan-Michael Key and Jordan Peele reunite once more, but this time in the fantastical animated realm of stop-motion horror-comedy Wendell & Wild. The titular Wendell (Key) and Wild (Peele) are scheming demon brothers who enlist the help of 13-year-old Kat Elliot (Lyric Ross) to summon them to the Land of the Living. Complications arise, however, as Kat makes some demands to the brothers in return for her aid, launching a hilarious and strange adventure that defies the laws of life and death itself. Visually rich and narratively unique, Wendell & Wild is sure to take you on a delightful (and perhaps slightly deranged) journey like no other, just in time for Halloween.

You can get in the mood for some high-quality haunting early in the month by watching Mr. Harrigan’s Phone, which is based on Stephen King’s short story of the same name. The Netflix Original horror film is set in a small town, where a boy named Craig (Jaeden Martell) befriends elderly reclusive billionaire Mr. Harrigan (Donald Sutherland), forging an unlikely bond over their shared love of books. Craig even gifts Mr. Harrigan a cell phone to increase the ease of their communication. That phone, however, shockingly remains useful even after Mr. Harrigan passes away, as Craig’s calls to his deceased friend’s phone to vent about being bullied result in Mr. Harrigan’s spirit avenging his young friend by taking on the latter’s tormenters from beyond the grave.

Fans of music and anime are sure to go wild over this fascinating in-depth look at the Japanese singer, songwriter and lyricist known as LiSA, who has gained international fame for her hit songs, especially those used as theme music for popular anime series like Demon Slayer, Sword Art Online, and Angel Beats!. LiSA Another Great Day is a Netflix Original documentary about the singer’s journey from young Avril Lavigne-fan Risa Oribe to leading Japanese artist LiSA, staying true to her younger self’s dream to be a rock star while also branching out and trying brand new things. The film delves into LiSA’s music, highs and lows (both in her career and personal life), and quest to enter a whole new phase of her career with fresh goals and dreams to chase.

Anna Delvey granted bail, if she can find a place to stay
Kevin O'Leary Says Twitter Isn't Even Worth $10 Billion