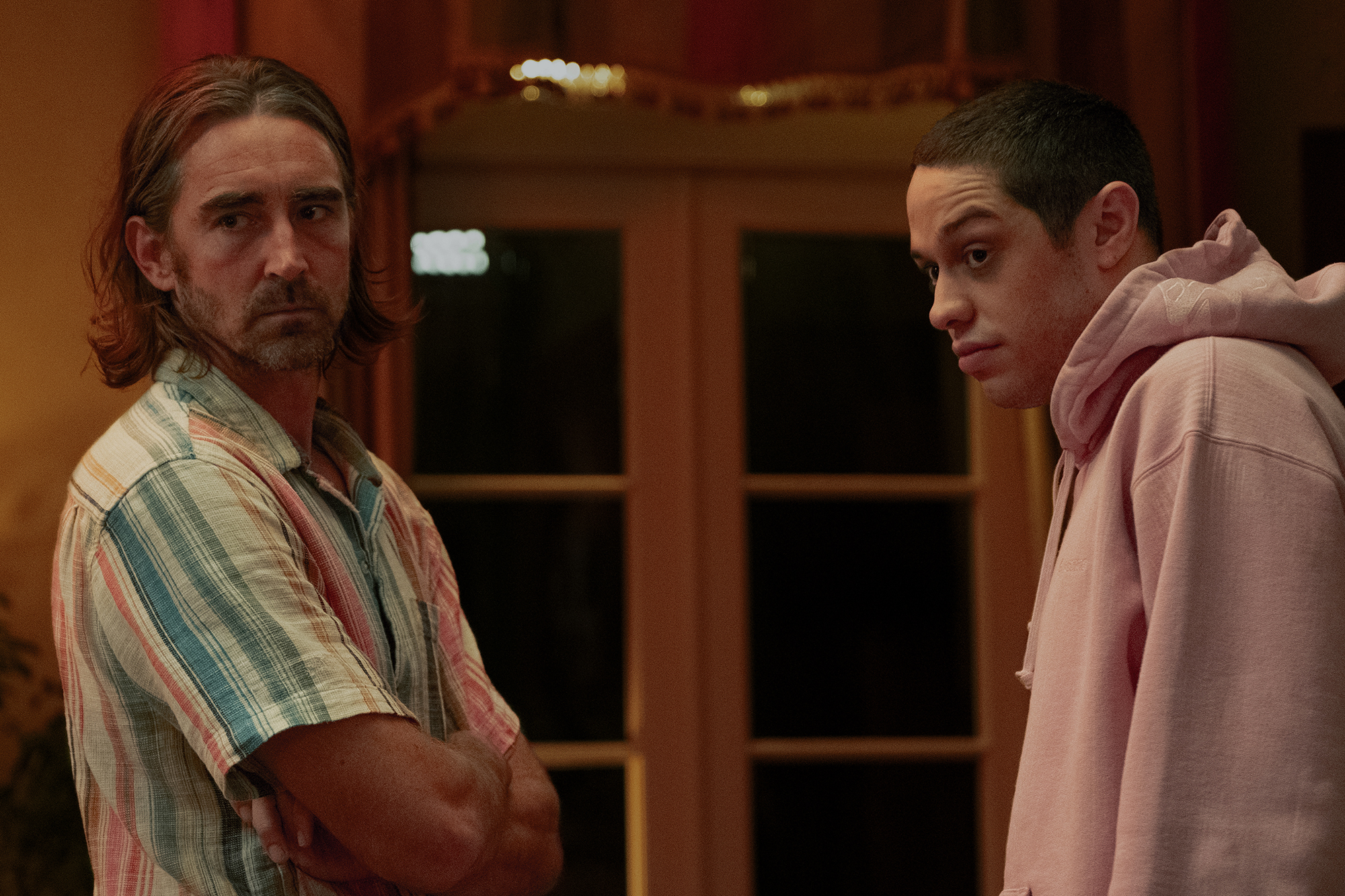 Did Mr. Sweetgreen kill Miss Uber with the meme in the TikTok?

That’s the modern vibe of the new twentysomething horror film “Bodies Bodies Bodies.” Sure, serial killers are scary, but not as much as being in your twenties today. Or, hell, simply being around people in their twenties.

One friend suggested to me after watching the trailer of the hip A24 flick that they were too old for the “Scream”-y movie, starring Pete Davidson and Maria Bakalova.

But I assure you: We are never too old to laugh at millennial and Gen Z idiots.

In director Halina Reijn’s taut, nightclub-looking movie, six vapid friends converge on the beautiful, gigantic, faraway house of David (Davidson) for a sleepover party celebrating a hurricane. Like one does.

Adding a necessary complication for a 2022 youth slasher film, there is no cell service at the house and the wifi password is loooooong.

A weekend of fun fast turns into a night of blood. Erik Chakeen

Tequila shots are downed, lines of coke snorted and dance parties commence. And then as night falls the group decides to play Bodies Bodies Bodies, a hide-and-go-seek/murder mystery game. Things get ugly fast.

David rips Sophie, his best friend, for abandoning the group chat. Alice stands up for Greg, proclaiming “He’s a libra moon — that says a lot!” Emma insists she’s “an ally,” and people whine that they’re triggered. Someone else shouts accusations of ableism. The satire is positively mouthwatering.

Amandla Stenberg, left, and Maria Bakalova are in a brand-new relationship in the horror film. Eric Chakeen

Then, during a round, a person walks outside to the sun room to discover a pal clutching their slit, bloody throat and they fall to the ground dead. Who did it? Who is the killer in their midst?

The whodunit aspect matters a lot less than delight that comes from watching the ridiculous characters spinning, and the prevailing question of “How many 25-year-olds does it take to solve a murder?” The answer turns out to be a punchline.

Davidson, as is his wont, plays an enjoyably sardonic version of himself who points out that his clique is insane even though he’s also an imbecile himself.

Playing low-key Bee was also a smart move for Bakalova, who first came to the world’s attention as Borat’s wild-and-crazy daughter in the sequel to Sacha Baron Cohen’s mockumentary. It got the then-unknown actress a Golden Globe nod. Here, she is subtle and relatable with a hint of darkness, proving there’s a lot more she can do than trick Southerners.

And Herrold acts with a constant cold intensity that keeps us wondering if Jordan is evil or just awful.

But “Bodies Bodies Bodies” is stolen by the extraordinarily talented Rachel Sennott as Alice. The 26-year-old actress was equally terrific in the subtler, lovely 2020 comedy “Shiva Baby,” but here she’s allowed to totally unleash. She creates such an obnoxious, familiar, wickedly hilarious character that it’s almost therapeutic to see this type of young person so skillfully mocked.

And, while the comedy genre has become more atmospheric lately than jokey, Sennott’s still got the old-school skill of both projecting a funny persona and nailing punchlines. She should be a big star.

“Bodies,” all told, is slight. The movie goes by lightning fast (better than the alternative) and the culmination is more vicious commentary than a bombshell. It’s never as scary as A24’s “The Witch” or “Hereditary,” but that’s not the point.

Reijn’s film, which was written by Sarah DeLappe and Kristen Roupenian, succeeds in making a young basement horror movie for today. And, as least year’s “Scream” reboot showed us, it’s a genre that’s been stuck for far too long in 1996.