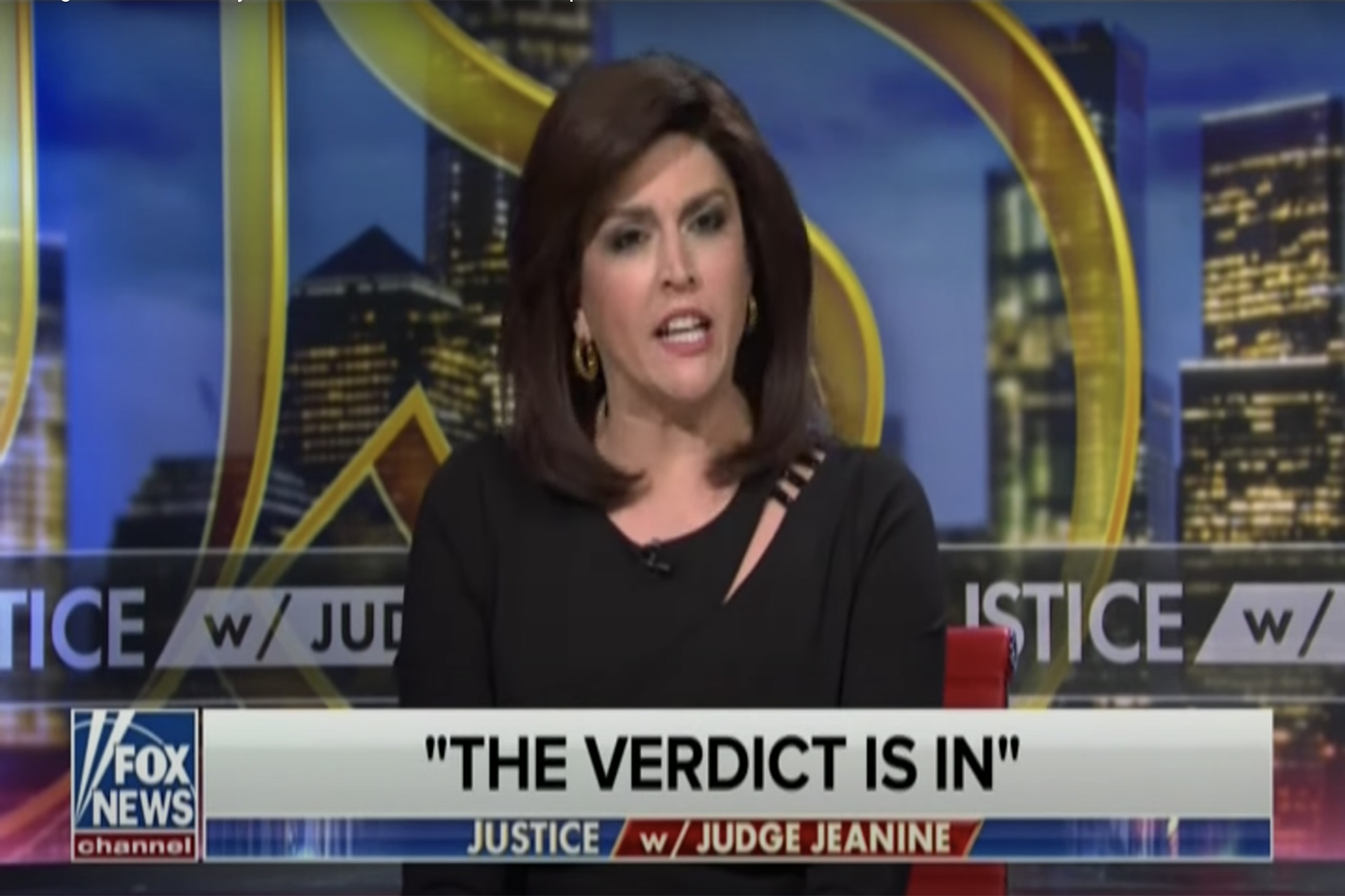 Cecily Strong opened the discussion with a cartoon of the former New York prosecutor, on a fake episode “Justice With Judge Jeanine.”

“That lovable scamp was put through a nightmare of a trial just for doing the most American thing anyone can do,”She barked. “Protecting an empty used car lot in someone else’s town.”

The conservative host then called in liberal commentators for their opinions.

“We were told you invited us in the interest of fairness,”Chloe Fineman, the featured player, impersonating a talking head.

“And you fell for it, that’s on you, dumb-dumb,” Strong’s angry character retorted while apparently sipping booze from her coffee cup.

Chris Redd portrayed a Howard University professor who provided a counterpoint to the commentator’s shock at the Kenosha trial result.

“I have many, many times,”Redd responded.

“I feel like it’s not who we are,”She continued.

“It kind of is though,”He lamented.

Cast member Alex Moffat lampooned Senate Minority Leader Kevin McCarthy’s eight-hour tirade on the floor of the House, as he tossed a water bottle around to fill time.

“And that brave man stopped the Build Back Better bill from being passed, until it passed the next day in two minutes,” Pirro said.

Alex Moffat portrayed Senate Minority Leader Kevin McCarthy, a call back to McCarthy’s lengthy tirade on the House floor ahead of the “Build Back Better” vote.NBC

James Austin Johnson’s Donald Trump impersonation got the most laughs in the skit, as he went on a meandering rant that started with the infrastructure bill and ended with ridiculous pop culture observations, which excited the fictional Pirro.

“It’s terrible what they’re doing with Dua Lipa’s husband not being attractive. We have to do something about it. She’s tall, she’s Armenian — which is basically white — and you know who else is white? Bob the Builder, build the wall, Trump 2024,” Johnson’s Trump said.

The episode was hosted by Simu Liu, who introduced himself as “Marvel’s first Chinese superhero,”He explained how he was able get the lead role in “Shang-Chi and the Legend of the Ten Rings.”

“The same way every Canadian gets their big break: by asking politely,” Liu cracked.

A Target commercial that was fake offered deals to help Americans get through awkward Thanksgiving gatherings. It included headphones for elderly relatives who start talking about politics, grill lighters to smoke cigarettes in the driveway, and toys that could be used as a distraction. “kids can destroy when they’re left alone in the basement.”

A fake game show called “Republican or Not”Kenan Thompson was the host and asked contestants to guess which political party they were based on their short statements.

“Incorrect. He was talking about these cops,”Thompson spoke while showing Thompson a photo of the police trying to stop rioters entering the Capitol.

Strong played Sen. Liz Cheney. She then listed her conservative credentials but was exposed as a Democrat by Wyoming Republicans after she criticised Trump.

“Like it or not you are the Rachel Dolezal of the Republican party,” Thompson quipped.

Pete Davidson was accompanied by “Walking in Memphis” singer Marc Chon, Wu-Tang Clan’s Method Man and Big Wet for a parody tune about his home borough.

“We got a lot of cops, a ton of pills,”He sang in “Walking in Staten,”While nodding to other Staten Island stereotypes, the pictures of babies wearing gold chains, dead bodies and racist Italian Americans were included.

“Weekend Update” anchors told several jokes about the Rittenhouse verdict, including a quip about how throngs of protesters took the streets to march against the jury’s decision.

“Which is brave because Rittenhouse just got off for shooting protestors. I don’t know maybe don’t tempt him,”Micheal Che cracked.

Colin Jost made a joke about Rep. Matt Gaetz claiming that his office would be open for Rittenhouse to be hired as a congressional intern.

“Gaetz has always loved teenagers that are willing to do terrible things,” Jost said, alluding to the Florida pol’s teenage sex trafficking allegations.

Saweetie, a rapper, took to Studio 8H’s stage to perform a medley her songs “Tap In” “Best Friend,”As well as “Icy Chain.”

The show will now go on a two-week hiatus, but it is scheduled to be back on the air Dec. 11, when Billie Eilish will host and perform as a musical guest.

Here are some places to meet young crypto millionaires in New York.
GOP Senate Candidate is Not Vaccinated but Makes a Lot of Money on Vaccine Makers