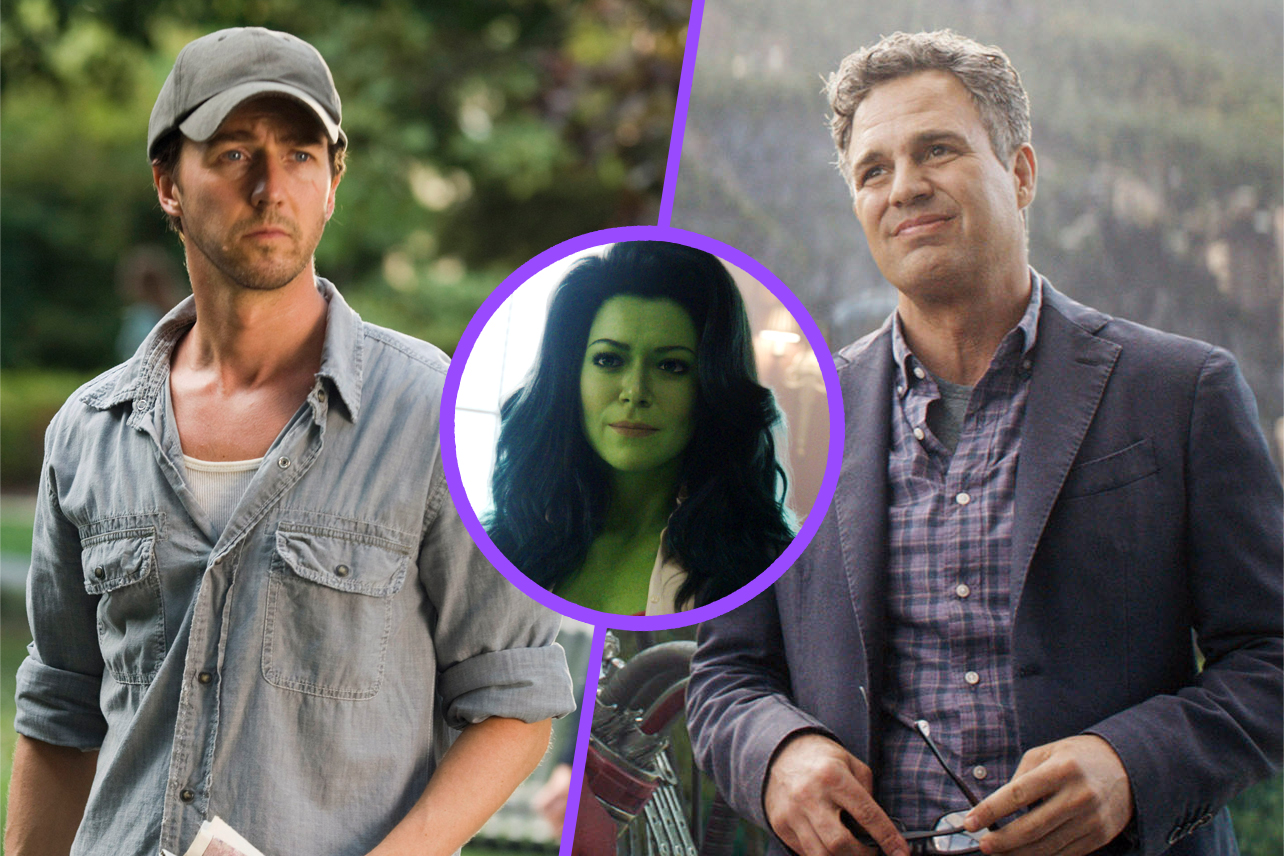 She-Hulk is a superhero unlike any other. Okay, yes, she is a Hulk and there is famously another Hulk out there. But in her new Disney+ series She-Hulk: Attorney at Law, Jennifer Walters (Tatiana Maslany) has a power that no other superhero has: she can talk directly to us. And in She-Hulk: Attorney at Law Episode 2 — SPOILERS ahead — she directly addresses the metaphorical green elephant in the room. She literally LOLs at one of Marvel Studios’ biggest casting changes ever: Edward Norton in The Incredible Hulk changing into Mark Ruffalo in The Avengers.

But before we get into that — about the fourth-wall-breaking thing. Yes, I know Deadpool exists but, here’s a lesson: She-Hulk started talking directly to comic book readers way, way back in May 1989 on the cover of Sensational She-Hulk #1. Even though Deadpool debuted in 1991, he didn’t start breaking the fourth wall until Deadpool #34, cover-dated November 1999. She-Hulk has 10 years on Wade. Moving on to the actual content you came here for!

How does She-Hulk: Attorney at Law address the Hulk casting change?

In Episode 2, Jennifer Walters gets hired by mega-powerful law firm GLK&H. They want her — as She-Hulk, mind you — to head up their superhuman law division. Her first case: representing Emil Blonsky (Tim Roth) at his parole hearing. She immediately calls out the conflict of interest, what with Blonsky being the Abomination, a.k.a. the super-monster that tried to kill her cousin Bruce way back in 2008’s Incredible Hulk. Turns out Blonsky’s fine with that, and Jen has to take the case or she’s out of a job. When she calls her cousin to tell him that she’s taking the case (at first she disguises the call as her asking his permission), here’s what Bruce Banner (Mark Ruffalo) has to say:

“That fight was so many years ago. I’m a completely different person now, literally.” And then Jen looks at us and lets out a big, cheeky “ha.” The joke is, of course, that Bruce Banner is literally a different person now — and not just because he’s managed to merge his Hulk and Banner identities. Back when he fought Emil Blonsky, the Hulk looked way more like Edward Norton than Mark Ruffalo.

Why was Edward Norton recast and replaced with Mark Ruffalo as the Hulk?

Unlike nearly every other actor in the Marvel Cinematic Universe, Edward Norton was cast as Bruce Banner back before there even was an MCU. At the time, the newly-formed Marvel Studios was producing two films — Iron Man and Incredible Hulk — simultaneously, but not necessarily as part of a shared universe. It wasn’t until they decided to shoot some connective post-credits scenes for both films that the MCU as we know it was born.

When it came time to make Marvel’s The Avengers, Norton was expected to return as the Hulk. Negotiations didn’t go well, however, and ultimately Marvel decided to recast the role with an actor who, as Marvel Studios President Kevin Feige said at the time, “embodies the creativity and collaborative spirit of our other talented cast members.” That actor ended up being Mark Ruffalo, and he’s played the Hulk for the last 10 years (8 films and 1 TV series, so far).

Really, the fact that She-Hulk: Attorney at Law is pulling so heavily from 2008’s Incredible Hulk is a bit of a marvel in and of itself. Of course it is, considering the character’s inextricable ties to the Hulk, but the MCU went years before acknowledging any events from that film. For a while, General Thunderbolt Ross (played by the late William Hurt) was the only character from Incredible Hulk to make a return appearance in the MCU. General Ross has since been joined by Martin Starr, whose teacher character from the Spider-Man trilogy has been retconned to be the same guy as the computer nerd he played way back in Incredible Hulk. Now we can add Tim Roth’s Abomination to the short list.

Fingers crossed other lost elements from 2008’s Incredible Hulk appear later in She-Hulk: Attorney at Law. We wouldn’t say no to Liv Tyler returning as Betty Ross. After all, she became the Red She-Hulk for a while in the comics! Can the MCU handle two She-Hulks?

New episodes of She-Hulk: Attorney at Law premiere on Disney+ on Thursdays.