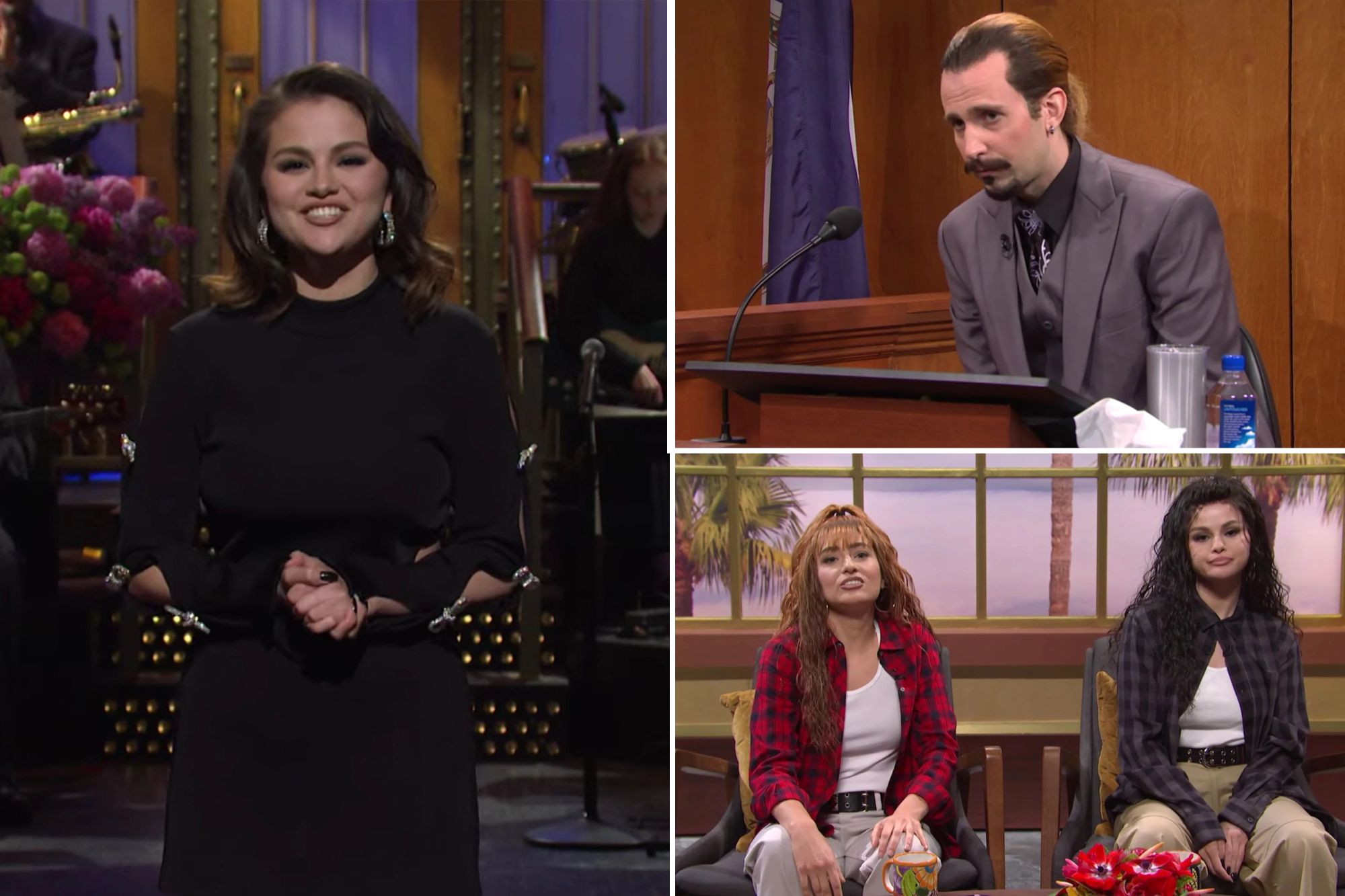 “Saturday Night Live” opened up by lampooning the explosive allegations made in the ongoing Johnny Depp and Amber Heard defamation trial.

“I am Nicole Wallace and you are watching MSNBC News because you have nowhere else to place your anger,” Kate McKinnon said, portraying the anchor introducing the cable network’s trial coverage.

“I’d like to see more of the video, because it’s funny,” the judge, played by Cecily Strong said, overruling an objection from Heard’s lawyer.

“Mr. Depp are you finding this trial amusing?,” Strong asked the smirking witness.

“A little yes,” he replied.

“So am I,” she said, raising a glass of wine hidden behind her bench as she proposed a toast.

Heard’s publicist declined to comment on the cold open when reached by The Post and Depp’s representatives did not immediately respond to a message.

Singer and actress Selena Gomez, 29, made her hosting debut and told the cast she was looking for love on the show.

“One reason I’m really excited to host SNL is because I’m single and I’ve heard SNL is a great place to find romance,” she said. “At this point I’ll take anyone.”

Mooney and James Austin Johnson both volunteered their services but were quickly shot down.

“Oh, this is the new cast member Jeff,” Gomez said.

“It’s James, but I’ll change it to Jeff if you want,” Johnson replied.

The host was more receptive to an advance from Punky Johnson.

The former “Barney & Friends” child actress then ended the monologue by leading the crowd in a singalong of the show’s “I Love You” song.

Singer and actress Selena Gomez made her hosting debut and told the cast she was looking for love on the show.Youtube / Saturday Night Live

Melissa Villaseñor played a young child of divorce that sought comfort in her Bratz dolls, (Gomez, Aidy Bryant and Bowen Yang) who gave her questionable advice and declared their intention to seduce her philandering father.

“I just don’t get why dad doesn’t love my mom anymore,” Villaseñor exclaimed, while asking the dolls for words of wisdom.

“Be authentic and be a bitch to every waiter you see,” Bryant offered, before Yang said the dolls were headed to Miami to party with her dad.

A Japanese show that followed toddlers running errands by themselves was rebranded for the US featuring middle-aged men that struggled to do things without their long-term girlfriends.

Gomez ended up dumping Mikey Day after his 34-year-old character FAILED to execute a solo trip to Sephora and the bodega.

Villaseñor and Gomez played Latina public access hosts with short attention spans and limited vocabularies who struggled to interact with their correspondents and guests.

In the next skit, Thompson portrayed an exasperated small theater director who had to keep feeding lines to his understudies and reprimand them for using Australian accents in an Irish period drama.

“I knew it would be funny to have your boss sit down and have a noise come from his butt, but I couldn’t figure out which sound,” Martin recounted.

His dilemma was solved when he met a muse who perpetually breaks wind, played by Bryant, who also inspired him to invent gags like electric gum and snakes in a can.

“Weekend Update” parodied the news of the week, touching on the cryptocurrency collapse and Roe v. Wade reversal.

“If you feel like things are a little off this week, yesterday was Friday the 13th, tomorrow is a blood moon, and according to the most annoying person you know, Mercury is in retrograde,” anchor Colin Jost cracked.

Co-anchor Michael Che riffed on the halted production of the iPod.

“Because Apple products become obsolete once they’re older than the children who make them,” Che joked.

Sarah Sherman did a live report from Jost’s dressing room, where an intern was being held in a cage.SNL

“It doesn’t matter if you’re deaf, as long as that body bangs.”

Sarah Sherman did a live report from Jost’s dressing room, where an intern was being held in a cage under self-affirming Post-its that read things like “You are the real king of Staten Island.”

Mooney also sat on the anchor desk in character as a drug-addled Baby Yoda.

Day depicted a dragon slayer that had to choose between marrying three princesses in a medieval castle, in a skit that used the same set as last week’s Roe v Wade cold open.

The suitor struggled to find flaws in the three women, played by Gomez, McKinnon and Ego Nwodim, and wondered if there was a catch.

After choosing McKinnon, it was revealed that she suffered from excessive gas; the episode’s third toilet humor joke at the expense of a woman.

In a prerecorded skit, Punky Johnson played Gomez’s inner jealous voice that convinced her that boyfriend Chris Redd was cheating, leading her to stalk him online and throw his Xbox out the widow.

When Gomez admitted she was insecure because she usually dates athletes and celebrities that sleep around, musical guest Post Malone was introduced as Redd’s jealous inner voice. That led Redd to accuse Gomez of getting nude pics from LeBron James.

“Cause in this moment you’re the youngest you’ll ever be,” Nwodim said.

“I like your look,” Gomez, playing a model, asked a student. “How old are you?”

Post Malone brought out Roddy Rich to perform their song “Cooped Up” before he performed a “Love/Hate Letter To Alcohol.”SNL

Post Malone brought out Roddy Rich to perform their song “Cooped Up” before delivering a dramatic rendition of “Love/Hate Letter To Alcohol.”

The NBC show’s season finale is next week and is set to feature actress Natasha Lyonne as guest host with musical guest Japanese Breakfast.

Jason Momoa apologizes for pictures inside Sistine Chapel
Fox Cancels 'Pivoting,' 'Our Kind of People' After Just One Season Each