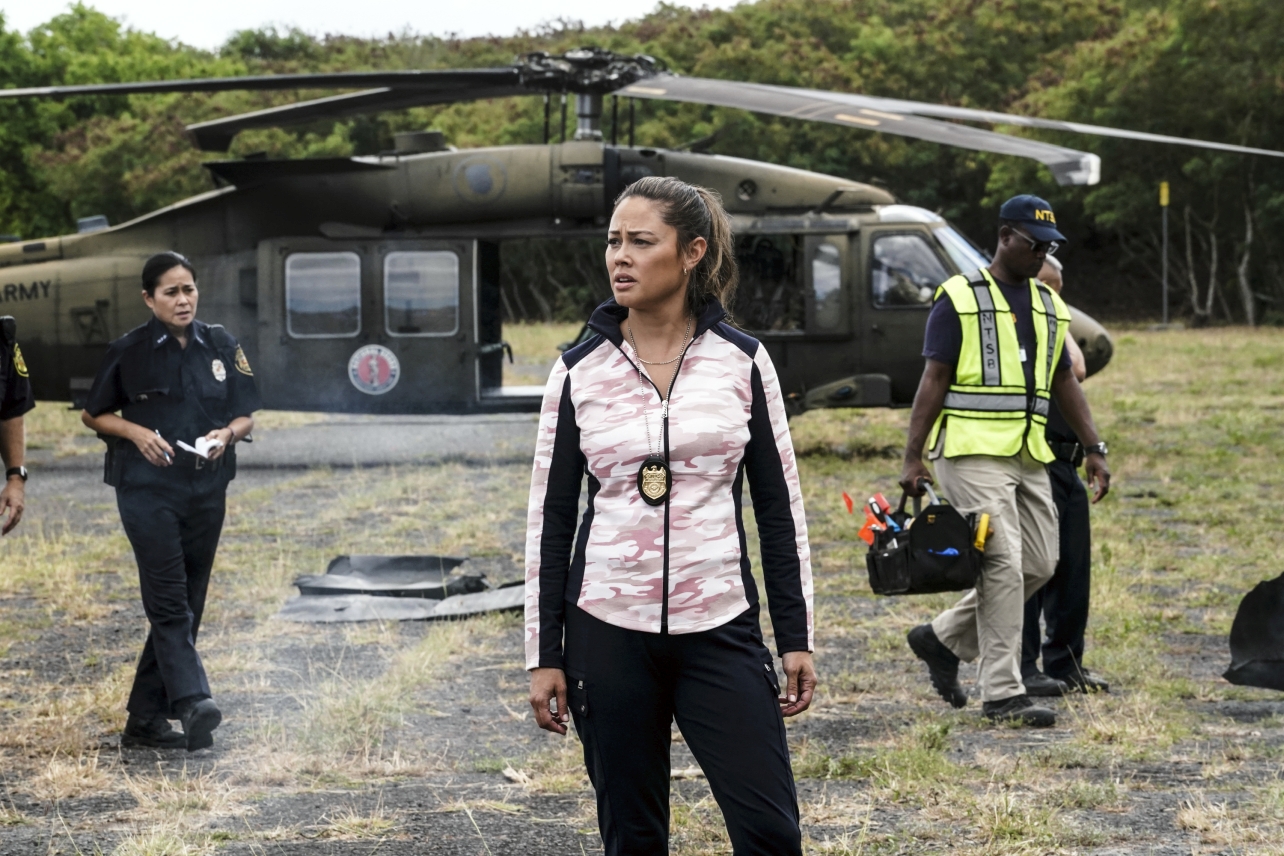 There’s a reason why the NCIS franchise has been so successful over the past two decades; the mix of military crime investigations, high-tech gizmos, and a scintilla of character backstories is catnip to CBS’s viewers. There’s not much about NCIS: Hawai’i that strays from that formula. With Vanessa Lachey as the lead, Christopher Silber, Jan Nash, and Matt Bosack have created a slightly different dynamic. Keep reading to learn more.

Opening Shot: A scene of people enjoying the sun on Ohau. People look up to see a fighter plane coming in low and crashing into nearby mountains.

The Gist: A dramatic scene unfolds when Jane Tennant (Vanessa Lachey), coaching her daughter’s soccer team on the Pearl Harbor Joint Base, gets called in on the fighter jet crash; a helicopter lands on the field and she gets in right away. She’s the first female head of NCIS: Pearl, and when she goes to the crash site, she declares it a crime scene, much to the consternation of Captain Joe Milius (Enver Gjokaj), a high-ranking commander of the Pacific Fleet. It’s a top-secret project, but Tennant tells him that the pilot called NCIS with espionage concerns the night before he crashed.

Here she starts to engage her team: Jesse Boone, Noah Mills, her second-in command; Lucy Tara (Yasmine al-Bustami), a bold agent who has only been there for about one year; and Ernie Malik(Jason Antoon), the tech specialist. Missing is the “new guy”, Kai Holman (Alex Tarrant), who just transferred to Pearl two weeks prior in order to take care of his ailing father; she picked him up from an HPD station after he got mixed up with some patrol cops about how they broke up a fight.

We learn a few interesting facts about the team as they try to figure out why the pilot crashed. When Kai goes to a surf club to investigate a lead, he insists on going alone; it’s because his close friend is there, upset that he ghosted everyone on the island when he went into the military — “You don’t turn your back on the ocean,” she says to him. Lucy breaks protocol by sneaking a peak at an autopsy report that was being held by Kate Whistler (Tori Anderson), a special agent of the Defense Intelligence Agency; when she goes to Kate’s apartment to apologize, we see that they have a history.

What Shows Will It Remind You Of? This is what you get if you take any of the NCIS shows (Los Angeles, New Orleans), and combine them with the setting of Hawaii Five-0.

Our Take: While we don’t one hundred percent buy Lachey as a determined, hard-nosed military investigator who has broken the glass ceiling at the top of a big NCIS division, she doesn’t do anything in the pilot to indicate that she won’t be able to get comfortable in the part of Tennant. We see that she’s a single mom and that she has to deal with her preteen daughter Julie (Mahina Napoleon) and surly teen son Alex (Kian Talan), and we’ll likely see more of that as time goes on, and she also seems to be positioning herself as a mentor to Kai. Where it goes from there is anyone’s guess.

Kai’s story is the most developed, because he seems to be the only one on the team who’s a native of the state. So he’ll have to reconcile his father’s ailment, his responsibilities towards his job and his family, but his inner knowledge of what’s going on in Oahu will likely aid in the investigations.

Everything else seems superfluous at the moment, including the Lucy/Kate thing, which we hope wasn’t introduced just to get dropped as the season goes along. But, as we said, continuing storylines and character backstories aren’t the strength of NCIS, so we should at least be happy that we got that much character background in the pilot.

Although the mystery involving Chinese spies as well as a dead girlfriend and stolen technology was somewhat less confusing in the pilot, we do wish it had been a little simpler. But, like all CBS procedurals in general, each case will be different. We would like to see more consistency in the episodes, given that the cases are the main focus of the drama. You can. But that feels like a lot to ask of any of the network’s procedurals.

Sex and Skin: Besides Lucy and Kate having a brief make-out when Lucy goes to apologize, there’s nothing.

Parting Shot: The team has a potluck on Jane’s back deck after cracking the case.

Sleeper Star: We’ve seen Jason Antoon’s bug-eyed presence on so many shows, it’s good to see him get a regular gig on an NCIS series. Even though he is not technically proficient, he adds humor to the team.

Our Call: STREAM IT if you’re an NCIS fan. NCIS: Hawai’i will give you more of the same stuff you love, with the Aloha state as a beautiful backdrop. If you’re expecting anything deeper than that, though, you should SKIP IT.

Joel Keller (@joelkeller) writes about food, entertainment, parenting and tech, but he doesn’t kid himself: he’s a TV junkie. His writing has been published in the New York Times and Slate.