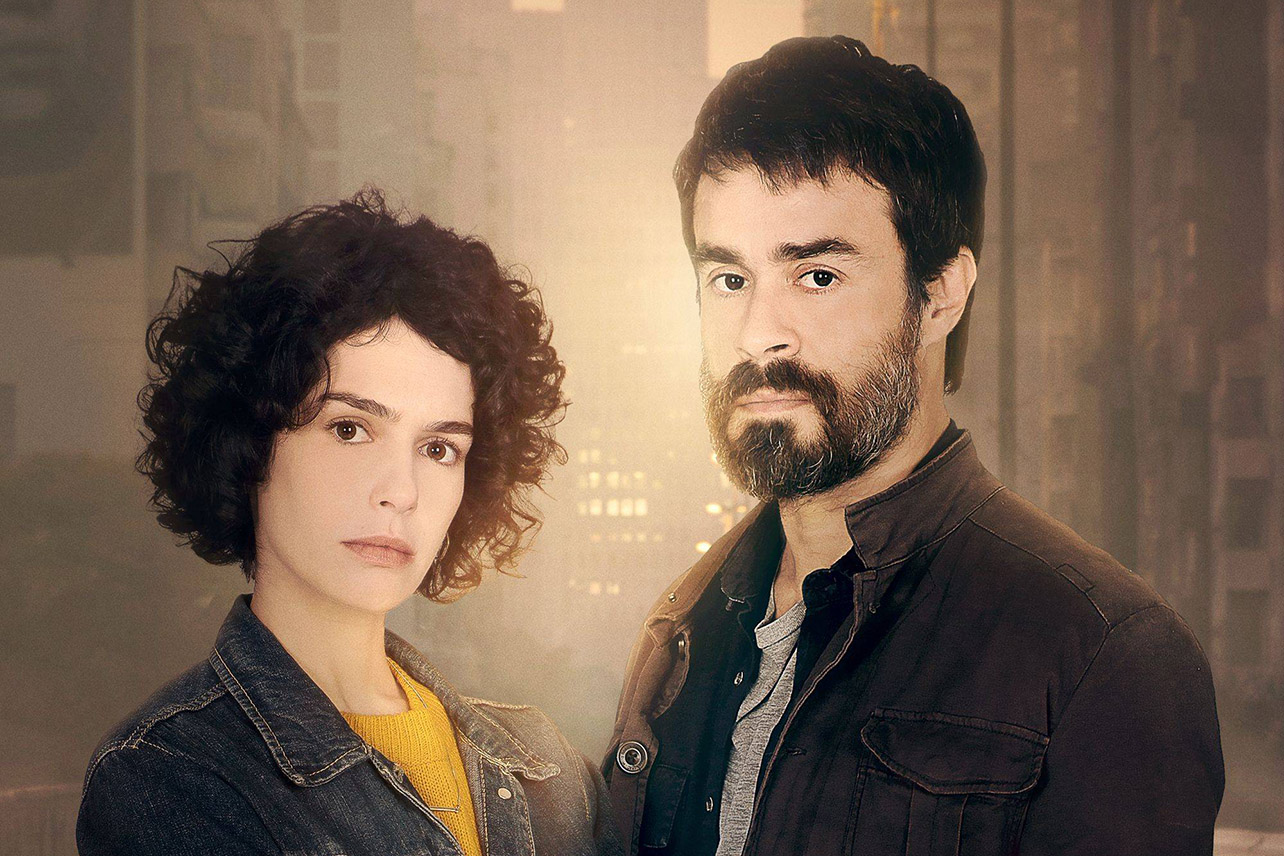 In the Brazilian drama The Missing (HBO Max), also known in Portuguese as Os Ausentes, Private investigator Raul (Erom Cordeiro) and his sidekick Waldir (Augusto Madeira) locate the missing and the kidnapped in São Paulo by whatever means necessary. Cordeiro and Madeira also co-star in The Division (A Divisao), another Brazilian drama about kidnappings, criminals, and crooked cops in 1990’s Rio de Janeiro.

Opening Shot: A child’s teddy bear hangs inverted from a peg as two men advance down a narrow passage lit in lurid reds and greens. Doors open off of this passageway, but they don’t seem to go anywhere someone would actually want to go. The men continue their journey and arrive at an enormous tenement structure. “Are you sure about this?”

The Gist: In São Paulo, Brazil, there is an epidemic of the missing and kidnapped. Raul Fagnani, Erom Cordeiro, is so busy because someone disappears every 2 minutes. The former police detective now operates as a private investigator, and everybody on the streets knows he’s the best there is. Although he is a bit guarded and prickly, Raul is determined to help people find missing loved ones. He was driven by the kidnapping his daughter years ago, which he lost his job and ended his marriage. Now, Raul works out of the back of a candy shop run by his old friend and confidante Edith (Flavia Garrafa), where Tai (Indira Nascimento) works the phones and tracks social media for intelligence on missing persons and potential suspects while Waldir (Augusto Madeira) operates as Raul’s backup, sounding board, and right hand man. In “Roberta & Marcella,”The Missing’s first episode features a man who hires Raul to find his exwife and young daughter. However, it quickly becomes a case of shifting loyalties and some unseen moving parts.

It’s not just that Roberta and Marcella have been missing for more than the 24-hour period Raul says is most critical to finding someone. He also has to contend with a tagalong, who shows up at Edith’s candy shop and introduces herself Maria Julia (Maria Flor), a journalist for the National Gazette. She says she’s writing a story about Raul and his investigative work, and before long she’s riding along as he begins drilling into Roberta’s life, sorting out who her friends are, chasing down her rough-and-tumble boyfriend, and detailing her movements over the last 48 to 72 hours. “He doesn’t care if people like him or not,” Maria observes about Raul to Edith, and the crusty PI’s old pal gives her a wry smile. “I think you understand him enough.”

What Shows will it Remind You of? There’s another The Missing. Tcheky Karyo stars as a retired French detective who investigates cold cases involving missing persons. In 2019, Karyo’s character of Jean Baptiste was spun off into his own limited series that aired in the US as part of PBS’ Masterpiece.

Our Take: The Missing features the tried-and-true private investigator TV series, where the private cop communicates with the real cops to find out more. But for Raul, who heads to the local police precinct with Maria in two with a mind to get the goods on Roberta’s gang-affiliated boyfriend, it’s a visit that takes him all the way back to his old office. His relationship with the current police lieutenant is cordial, but the memories of his daughter’s kidnapping that surface there aren’t welcome at all. The Missing doesn’t spend a whole lot of time dwelling on the past — its first episode begins with Raul and Waldir already in the middle of a missing persons case — but it teases enough about the personal tragedies Raul hauls with him like a long piece of chain that his peevish nature and stony glare are given real validity.

And The Missing, too, while delivering on the more functional parts of its premise (here’s Raul asking people questions, here he is running down a lead, here he is examining the evidence), saves its most intriguing moments for the very end of this first episode. While it was earlier revealed that Maria carries a piece in her purse, that wouldn’t be all that surprising in a town like São Paulo, which clearly has a missing persons problem. But when Raul looks into her background as a journalist and finds literally nothing, it’s worth it for him and us to consider just what she’s been doing riding piggyback on him and his team’s investigations. The Missing will continue to provide these answers in future episodes. We also get to know Raul’s sad personal history.

Parting Shot “Do you know how many people I’ve helped find? Did you really think you’d sneak into my work, my team, my agency, and I would not investigate you? Tell me. Who are you?” The Missing keeps mum about Maria Julia’s motivations until its final few moments, when Raul challenges her story about being a journalist.

Sleeper Star: Augusto Madeira, who co-starred with Cordeiro in A Divisao, manages to make Waldir somebody who’s constantly annoyed by the demands Raul makes on how he spends his day, but still a guy who would run through walls for Raul any day of the week.

Most Pilot-y Line: “Sometimes, even the underdogs have a good day.”

Our Call: STREAM IT. With its interesting São Paulo setting and an intriguingly gruff lead performance by Erom Cordeiro as PI with the disappeared on his mind, The Missing brings an intriguing edge to the standard private investigator TV show.

The Missing is available on HBO Max