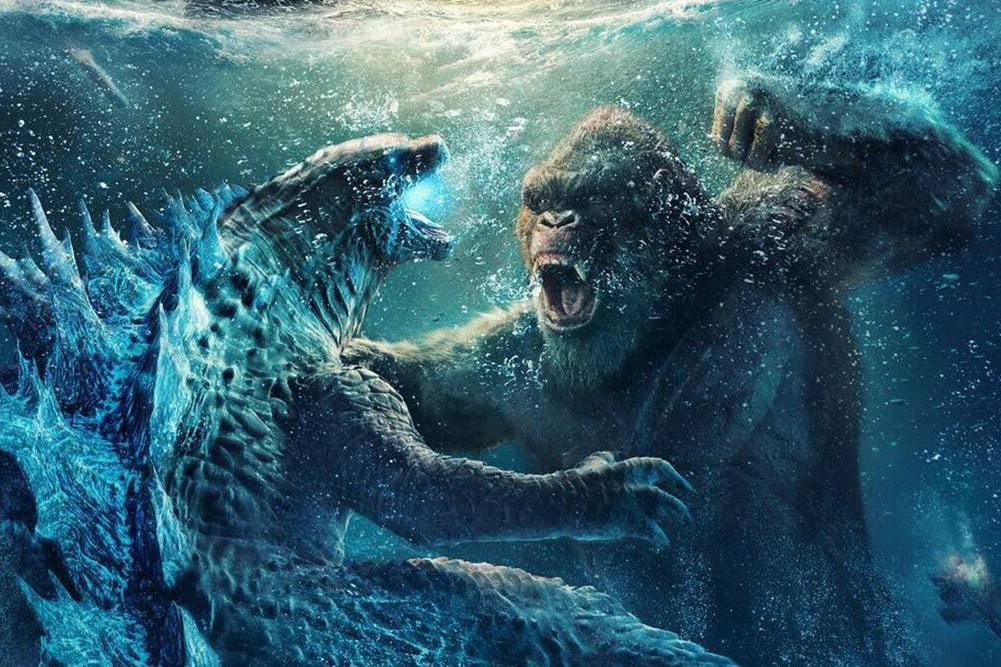 Godzilla vs. Kong (again!) is on HBO MaxTo pit the remade versions of these cinematic gianttuas against one another in a fight for supremacy. Here’s the tale of the tape: In this corner, the neo-pseudo-dino from the deep, breathing the spiciest of radioactive spews, the towering green goliath, Godzilla! This corner is home to the thrilla and simian sultan, Kong, who was once the king of the huge ring. TWO TITANS ENTER, ONE TITAN LEAVES, though we strongly doubt that! ONE WILL FALL screams the trailer, now let’s see how they wriggle out of that one, shall we?

The Gist: THE FIRST SUBTITLE: SOMEWHERE ON SKULLAND. Kong sleeps. Kong wakes. Kong yawns. Kong stretches. Kong rubs his stomach. Kong takes a shower. Kong greets Jia (Kaylee Holt), his best friend. Kong takes a spear out of a tree and throws it up, creating a hole in heaven. Kong lives in an underground dome. Projections on the underside give it the appearance of a beautiful, sunny day. We get some blah blah blah from Ilene Andrews (Rebecca Hall), caretaker of both Kong and Jia, but I’m not sure she’s adopted either? It’s never made clear. Ilene explains why the giant ape must be kept away from Godzilla. They have an old beef that dates back to a million-zillion-years ago, when their ancestors fought it out to determine who would rule the Earth under their huge-ass feet. “There can’t be two alpha titans,” she says, and I’ll be damned if I didn’t even need or want further explanation, because we really need to get to the fighting. If Godzilla and Kong ever realized the other existed, why golly, apex instincts would kick in and there’d be a kerfuffle and some poor innocent human might get a sliver in their pinkie toe. And that just can’t happen.

MEANWHILE IN PENSACOLA: This facility is owned by Apex Cybernetics. It’s an evil corporation where shady shit happens, and Bernie Hayes (Brian Tyree Henry) is going to find out exactly what it is. He’s a low-level Apex employee and host of the Titan Truth Podcast, where he blithers all his nutty conspiracy theories about titans like Godzilla and co. He learns a key tidbit of info just as the big G emerges from the ocean and starts stomping the bejeezus out of that very same Apex facility, apparently totally unprovoked, which I’m happy to report occurs after only 10 minutes, because sometimes with these movies we have to wait too long for some hot kaiju action. Bernie believes Godzilla was actually provoked by that same bit of information he gathered. Godzilla doesn’t just mindlessly attack shit, does he? She? They? They.

ANOTHER SUBTITLE: IT FRANKLY DOESN’T MATTER SO LET’S JUST GET ON WITH THE MASS DESTRUCTION, SHALL WE? But that’s not all: Apex’s CEO hires a scientist to assist him in reaching Hollow Earth, the location where all the titans originated. The guy is Nathan Lind, played by Alexander Skarsgard, who played Tarzan — remember when he was in 2016’s The Legend of Tarzan? How can you not? — so unofficially, this is a TARZAN VS. GODZILLA VS. KONG movie. This is so sweet! There’s one more character here, Millie Bobbie Brown’s Madison Russell, a veteran of Godzilla: King of the Monsters, who’s a big fan of the Titan Truth Podcast, so she and her buddy Josh (Julian Dennison) team up with Bernie to infiltrate Apex and find out why Godzilla’s so flippin’ honked off.

Don’t worry, we’re getting to the ultracolossal fighting here soon. Nathan and Ilene and Jia make a plan to pile into one of Apex’s special flying vehicles that’ll survive the “gravity inversion” that happens when you try to travel to Hollow Earth. They need a tour guide, and that’s Kong, who they coerce into going in the hopes that the lonely feller can meet some long-lost relatives. This entails knocking him out and transporting him on a giant ship to Antarctica, so I assume they gave him 50,000,000,000,000,000,000 cc’s of Benadryl via an 80-foot IV buddy. The trip has to be as quiet as possible so Godzilla doesn’t find about it, which of course he does, somewhere near Tasmania, and I’m happy to report that this happens relatively early in the movie, implying the existence of a round two. So Kong lands a goliath roundhouse to Godzilla’s jaw, and lizard tries to incinerate ape with radioactive breath-blasts, and all is just absolutely right with the world.

What movies will it bring back?: I haven’t seen this many gigantically crushing body blows and redonkulous haymakers since Rocky IV.

Performance Worth Watching: If you’re paying attention to any of the human cast members here, many of whom are perfectly great in other movies, you’re brainscrew needs to be righty-tightied. So kudos to the VFX team for putting Kong firmly in the upper echelon of CG ape characters who have deep inner emotional lives — his expressive face is just a baboon hair’s shy of the wondrously rendered simians in the modern Planet of the Apes films.

Memorable Dialogue: You haven’t lived until you’ve heard Rebecca Hall, one of the most underrated actors in the business (Vicky Cristina Barcelona, Christine, The Town, The Prestige, Red Riding), exhort with all her thespian powers, “KONG BOWS TO NO ONE.”

Sex and Skin: None, but I swear there’s one intense moment when Kong and Godzilla roar in each other’s faces so very close, and it’s tantalizingly referential to the rom-com trope in which the couple yells and argues and gets closer and closer and ends up kissing and having make-up sex. They just need to get over it.

Our Take: Godzilla vs. Kong features 40-ton headbutts as well as skyscraper smashing choke slams, giant tail whips, massive ape-axes, and enough behemothic destruction and mayhem to keep us occupied until at least Tuesday. It boasts an endlessly amusing disregard for science and a plot that inspires one to make cuckoo noises when describing it, partly due, but not exclusively limited to, its depiction of a world within the planet where all prehistoric beasts went to live a long time ago (and it’s an even more bonkers place than I’ll describe here). And that’s all before the third act hits ludicrous speed, when its monster mosh is bathed in the neon glow of late-night Hong Kong. I’d also add that it’s absolutely the best film ever made in which Rebecca Hall is asked to recite the line, “This is a power beyond our understanding. You can’t just drill into it!”, which I took as a meta-warning to not even try to find an intellectual handhold here.

All of this is just a way to say that the movie is really, truly stupid but also really, very cool.

Director Adam Wingard (The Guest, You’re Next) strikes the right tone, part gee-whiz camp, part getta-loada-THIS, and the film is several whales of fun. Wingard isn’t content to let his megalithic pugilists just pound on each other in workmanlike fashion, like Godzilla and co. did in the preceding film, 2019’s disappointing King of the Monsters. His camera slickly whirls and spins, zooms close to the monsters’ sweet and/or savage eyes, stands back and watches the spectacle in awe; it gets sucked deep underwater and through gut-churning gravity-warps (yeah, I know, but just go with it).

The Hollow Earth setting is stunningly and colorfully rendered. Hong Kong, the home of the completely berzerk final fight, is an incredible cityscape, a beautiful manmade piece of art, just waiting to be smashed into a dozen grades of leveling dust. The movie is frequently spectacular, a veritable feast for the eyeballs, and it’s begging to be seen on the biggest screen possible. As much as I love the streaming experience, not watching it in a theater made this particular kaiju fanboy a little bit sad (the movie is being released simultaneously in cineplexes and for 30 days on HBO Max, so it’s your call on the wheres and hows and COVID safety precautions here).

Godzilla vs. Kong might be a little light in depicting Godzilla’s inner life compared to Kong, who’s framed as not just a sympathetic hero, but a FRIEND of the CHILDREN — won’t SOMEBODY think of THE CHILDREN — with a big heart and occasionally warm eyes. Yet Godzilla isn’t quite the living symbol of the cold and cruel functional objectivity of nature that he was in the first MonsterVerse film, 2014’s Godzilla, which stands as the series’ strongest thematic exercise. He’s maybe mellowed a bit, and shows a flicker of anthropomorphic intelligence beneath that scaly glare. The new film is a shrewd blend of the Godzilla’s incisive visual wallop and the pleasurable comic-bookisms of 2017’s Kong: Skull Island. (It also makes a reference or two to 1962’s King Kong vs. Godzilla, so keep your eyes peeled.)

Honestly, watching these two scrap is like watching my cats fight — it’s highly entertaining, but you really wish they’d stop, maybe figure out how to team up against an invasive species in the house. Does this plot include a mouse? I won’t say, but Godzilla vs. Kong is a gratifying extravaganza of wanton destruction, and I grinned like a maniac through the whole thing. If it’s the final word on the new MonsterVerse (say it ain’t so?This is the end of the MonsterVerse franchise.

Our call: STREAM IT. If you allow it, the ridiculously entertaining Godzilla vs. Kong is sure to make your head turn. It delivers on its promise to smash everything in sight, and in another world, where we still tracked box office receipts, it’d likely be a big smash.

John Serba is a freelance journalist and film critic, based in Grand Rapids. Follow him on Twitter at @johnserba to see more of his work.