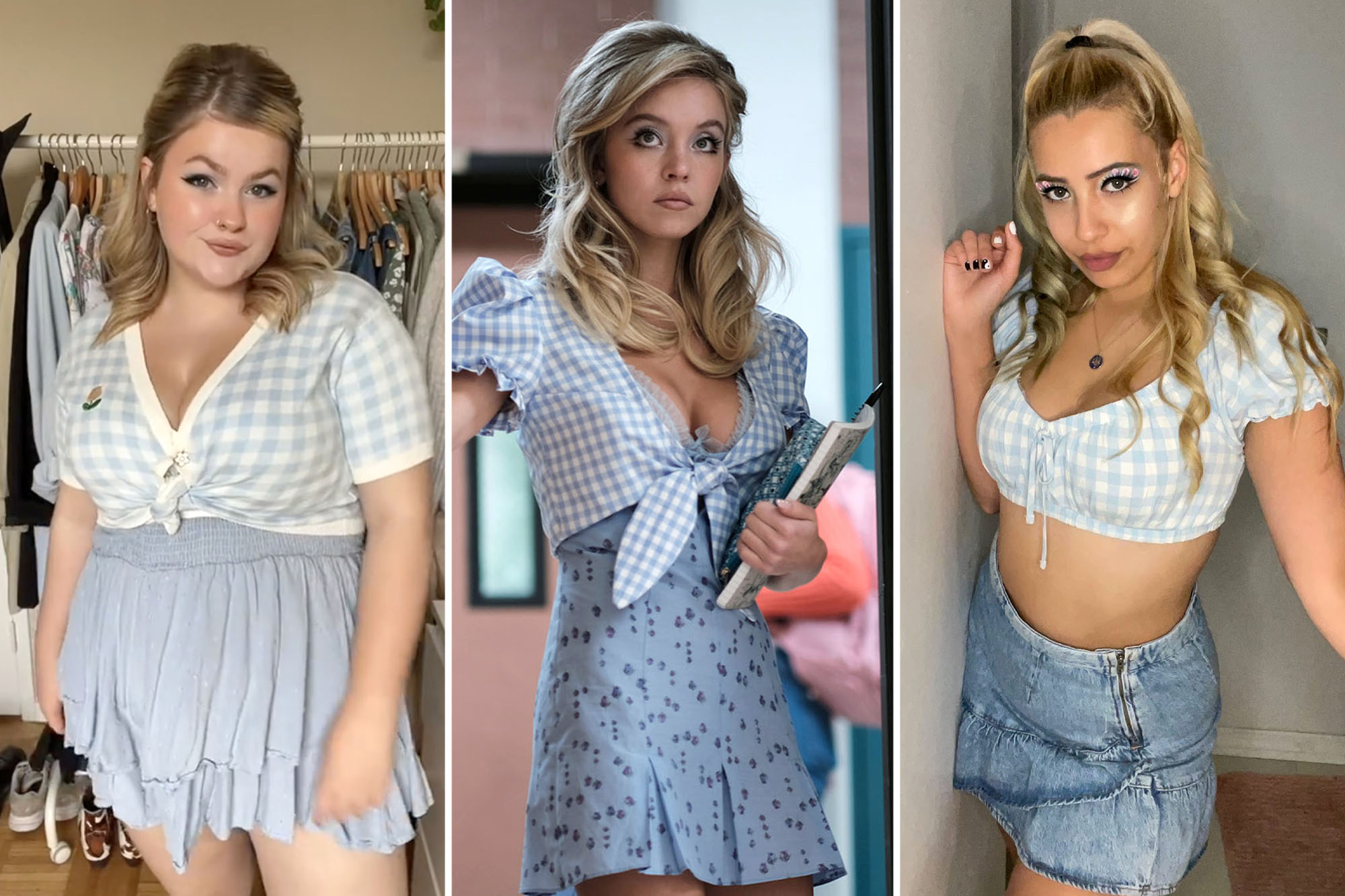 Now, Gen Z fashionistas are appropriating the 25-year-old Emmy nominee’s goofed-on getup for Halloween — and going viral themselves, with one earning more than 100,000 views on TikTok.

Under the TikTok hashtag #CassieHalloweenCostume, which has racked up more than 11,800 imprints, glam gals are showing off their stylish takes on the fashion faux pas made on the HBO Max show by Sweeney’s character, high-strung high schooler Cassie Howard, in a misguided effort to impress.

In the standout scene, Cassie dons a blue, flowery midi-dress beneath a white-and-blue gingham crop top, pairing the démodé duds with a pair of lace-up boots. Her snarky friends tease her for dressing like she’s auditioning for “Oklahoma!,” the legendary Rodgers & Hammerstein musical.

Sweeney, as Cassie Howard, becomes hysterical after her friends tease her for dressing like a “country music star.”
Alamy Stock Photo

Despite the negative reaction received by Sweeney’s character on “Euphoria,” fashionable fans of the series consider the look “iconic.”
Eddy Chen/HBO

The eye-popping outfit turned out to be an immediate hit with trendy fans of the show such as Stephens, who spent less than $100 shopping online outlets including Shein, Amazon and Princess Polly for gingham- and flower-printed pieces to chicly replicate the look on Oct. 31.

She shelled out $10 for a blue spaghetti-strap dress, another $26 for a blue checked shirt and $30 for a pair of white lace-up heels, all from Amazon.

Plus-size fashion content creator Christiana Webster, 24, a health-care administrator from Toronto, is vibing on the “country music star” look, too.

She snagged a $68 blue “Love Galore” romper from Princess Polly and transformed it into a skirt, then styled it with a $45 mini cardigan that she was gifted from Canadian boutique Carmico. She finished the ‘fit with $46 chunky ankle boots from Target.

And while she and Sweeney don’t exactly cut identical silhouettes, the full-figured fashion plate, who earned more than 18,000 TikTok views when she previewed her Halloween regalia earlier this month, said emulating the svelte starlet gave her an extra boost of confidence that she hopes is infectious.

Webster replicated Sweeney’s character’s costume in the hopes of inspiring other plus-size women to be sexy on Halloween.
Christiana Webster

“There aren’t a lot of options for plus-size women when it comes to Halloween costumes,” Webster told The Post. “I wanted to show the world that all bodies can achieve Cassie’s sexy country style.”

“I want to look hot [on Halloween],” said the sandy blond from Gainesville, Florida.

The aspiring singer spent less than $100 on her sexy, Sweeney-inspired top and skirt.
Alyssa Fantino

Fantino “dragged” her sister to several shops in the mall before finding the perfect pieces for her “Oklahoma!”-esque Halloween look at Aéropostale.
Alyssa Fantino

Intent on “showing some skin,” she reimagined Sweeney’s viral ensemble with a $15 midriff top and $30 denim skirt from Aéropostale, and $50 white cowboy boots from fashion mart the Copper Closet.

For added pizzazz, she decked out her face with icy-blue eye shadow from James Charles and adhesive body jewels from Dollar Tree.

Although it isn’t an exact replica, Fantino said she prefers her interpretation because “it reflects my personal style and pays homage to a character that I really like and relate to.”

The Cassie costume is popular with an even younger crowd, too.

Haley Robinson, a 17-year-old high school student from Washington, spent a grand total of $15 to turn her dream Sweeney disguise into a reality.

She pin-stitched together a $10 dress and $5 checkered top from Shein — both pieces she plans to re-wear in everyday life — for the costume, which earned her more than 103,000 TikTok views when she debuted it for her more than 718,000 followers at the top of the month.

“The look is simple, but so creative,” said Robinson, an up-and-coming actress who’s inspired by Sweeney’s meteoric rise and fashion influence. “If you wear it to a Halloween party, everyone’s going to think you’re the best [dressed] person there.”