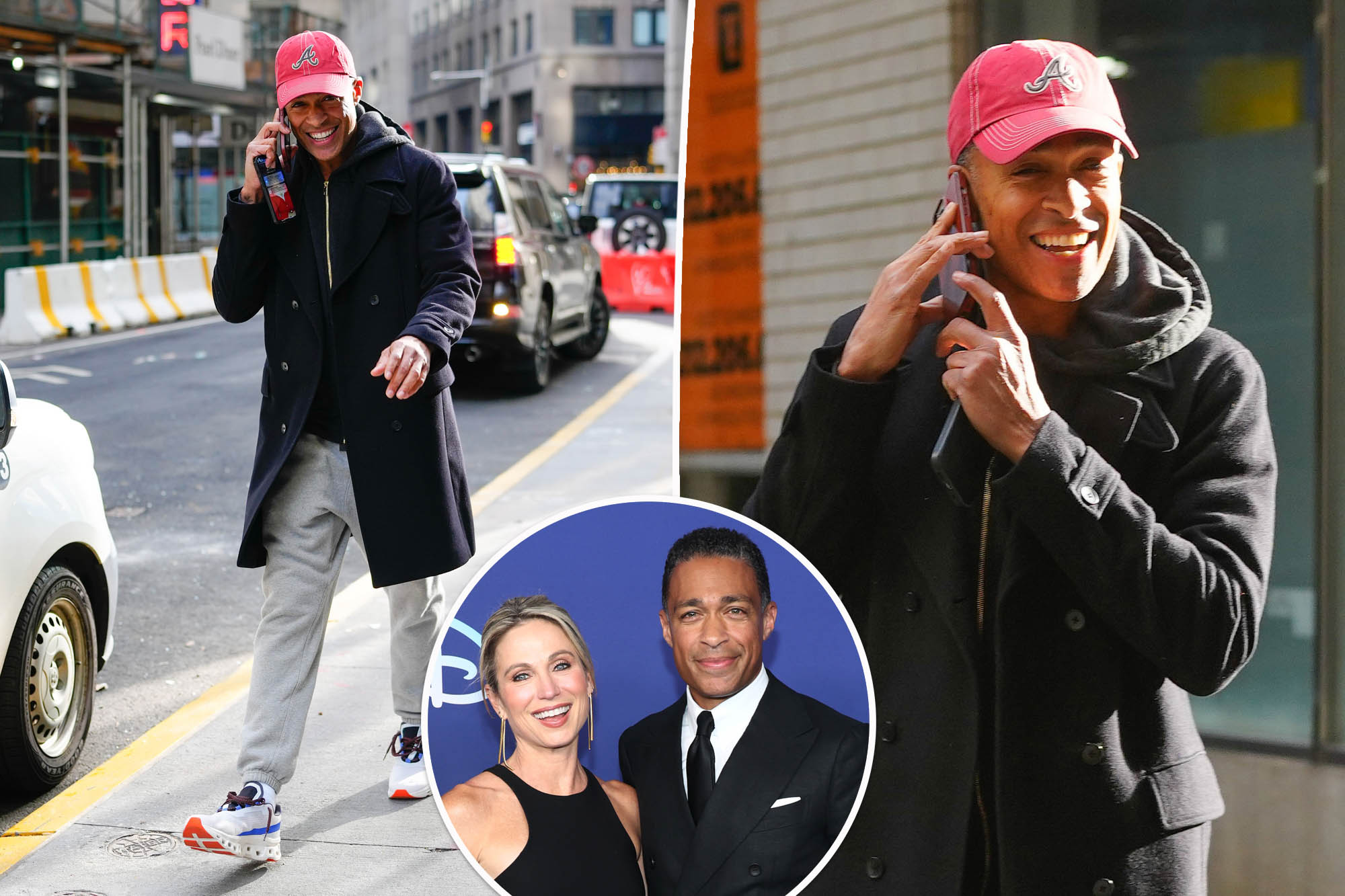 T.J. Holmes appears to be completely unfazed that his future at ABC is in jeopardy over his alleged affairs with co-workers.

One day after Page Six reported exclusive details about the suspended “GMA3” host’s alleged affair with a younger ABC employee, he was seen with a big grin on his face while talking on the phone.

Holmes sported a red Atlanta Braves dad hat, gray sweatpants, a black peacoat and white sneakers as he walked the streets of Manhattan on Friday.

In another snap, he even points to the camera while smiling.

The 45-year-old’s joyful stroll comes one day after a source claimed to Daily Mail that Holmes had a months-long affair with then-24-year-old Jasmin Pettaway in 2015 — while he had been married to his now-estranged wife, Marilee Fiebig, for five years.

T.J. Holmes sported a red Atlanta Braves cap as he walked the streets of Manhattan.TheImageDirect.com

“He was a predator who took full advantage of his position, and he was reckless,” claimed the source who was close to the script coordinator at the time.

“It was Jasmin’s first real job in television, and it was a big deal for her. She was looking for a mentor, and she reached out to several people. T.J. was someone who was responsive, but he absolutely abused the position of trust.”

The “GMA3” host’s appearance comes after he was accused of having a months-long affair with a younger ABC employee in 2015.TheImageDirect.com

The insider also claimed that Pettaway and Holmes would sometimes have sex “in his office” for a “couple of hours” before he was set to go on the air with his co-hosts.

An ABC source told Page Six that though Pettaway was at ABC for a short time, their alleged affair could be a “huge problem for T.J.,” since he was her superior.

An insider told Daily Mail that Holmes and Jasmin Pettaway would allegedly have sex in his office. TheImageDirect.com

In photos obtained by Daily Mail at the time, Holmes and Robach could be seen holding hands and spending time together at a cottage where the father of three was seen grabbing his co-host’s butt.

After the alleged affair publicly surfaced, ABC took both hosts off the air, pending an internal investigation.

While the duo’s future on the weekday show was initially uncertain, sources have now told us that Holmes and Robach are “unlikely” to return to their show. We’re also told they’ve both lawyered up.

Holmes filed for divorce from Fiebig last month after almost 13 years of marriage. The former couple shares one child together, 10-year-old daughter Sabine. He is also a dad to Jaiden and Brianna, whom he shares with ex-wife Amy Ferson.

Robach, for her part, is almost done finalizing her divorce from husband Andrew Shue. The pair tied the knot in 2010.