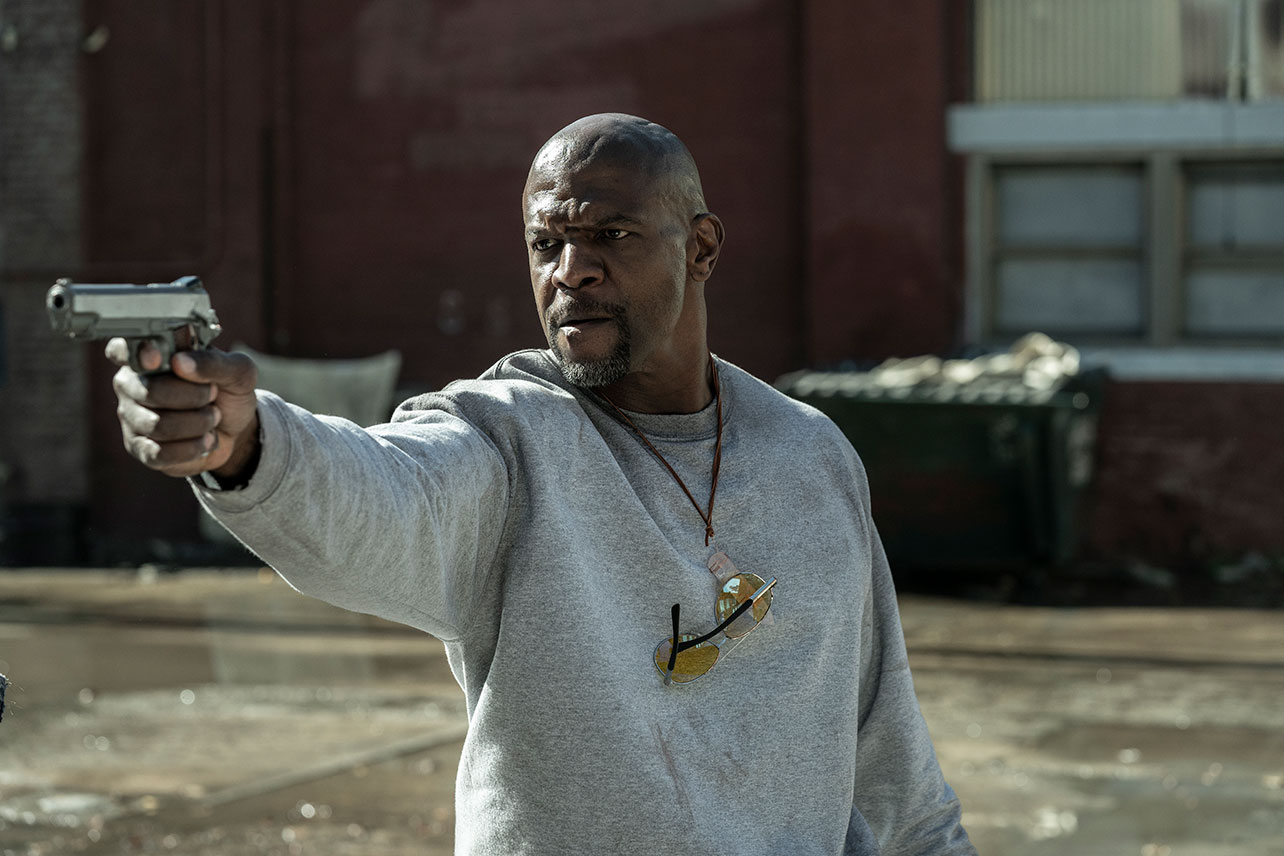 Tales of the Walking Dead is finally here on AMC, and how better to kick off the anthology series than pairing together old friends Terry Crews and Olivia Munn in a post-apocalypse scenario? In the episode, titled “Joe/Evie”, the duo trek across the country to try and reunite to with their lost loves — only to find they may have a stronger connection with each other.

Turns out, according to Crews, the duo were thrilled to be paired together in real life, too. “We have the greatest rapport,” Crews told Decider. “It just felt like, here we are again. And there was chemistry. It’s just like two friends hanging out, except in the apocalypse.”

To find out more from Crews, including why he joined The Walking Dead, how the episode tied into his real life growing up in Flint, Michigan, and what it was like working with the best dog actor ever, read on.

Decider: I talked to Channing Powell a little earlier this week and she said a large part of the reason you signed up for this is you’re a fan of Walking Dead. I assume that’s accurate, but is that accurate? And where did that fandom start?

Terry Crews: No, that is very, very accurate. It started when the show started… It’s an incredible show. What can I say? You know, I love the way it’s just about psychology, man. I mean, when Rick Grimes wakes up in that hospital and all of a sudden the world is all different, that really was a moment I’ll never forget. I always think about what would I do in that kind of situation, and I was hooked from the first episode. What was so wonderful is these characters have been a part of my life, and you kind of live and die with them. You know what I mean? It started with like Rick and Shane, and then to see the relationships shown and all the characters that keep coming in and then when they leave, it’s just like, there’s a mourning. I actually mourn the characters. It’s brutally honest. I think it’s one of those shows that doesn’t pull punches, and I love it. One thing is I’ve done a lot of comedy, but I’m a big, big, horror/sci-fi fan. So, this was just perfect. It was just a perfect, perfect mix for me.

Jumping into the episode, there are elements of you in the character of Joe — the football player element, in particular. But as Channing noted, you wouldn’t necessarily think of you as a doomsday prepper. How much of it was you coming in embracing the character, versus tweaking it a little bit to match your personality?

One thing I say a lot of times is this episode reminds me of what happened in Flint, Michigan, because we even referenced Flint in the episode, as he’s looking for Sandra. She may be in Flint. But Flint was a city that went through what I would call a Walking Dead moment. It was a beautiful city. It was like Palo Alto. General Motors was the number one corporation in the world, and all of a sudden, it all ended. And I’ll let you know, even now when I go back, there’s nothing that’s standing that was in my memory. My high school is gone. All the buildings I used to go and hang out are gone, and it’s just fields. There are whole neighborhoods that have been reduced to rubble, and I channeled that to prepare for Joe.

What was weird is as this stuff was happening, I saw it coming, even in high school. And I remember feeling like I need to be ready. This is one of the reasons why I prepared to play football and to get out, because I knew the city is dying. And then the crack epidemic hit at the same time. It was a double whammy. There were so many of my friends dying, going to jail. The whole fabric of the city changed. It was brutal. And that’s all I remember.

Like, that was my big preparation for what Joe was all about, because he saw it coming. And his whole thing was, I’m gonna be ready. I remember not even having girlfriends in high school because I didn’t want anything to tie me down to the city. Because I knew I’d have to leave. It’s vicious, it’s a brutal world and it was one thing that I knew I had to get ready for even as a kid. That was the headspace I felt Joe was in.

Can you talk a little bit about playing opposite Olivia Munn? I thought both of you had such a really sweet, positive rapport throughout the episode.

Oh, Olivia, you know, we spent a lot of time together doing Newsroom with Aaron Sorkin on HBO, and we even did some stuff on Lip Sync Battle together, and we’ve always been paired together. She even came to my anniversary of me and my wife, our thirtieth anniversary and hung out with our family. And so we’ve been friends for years. Been able to call each other and like, hey, you know, advice on this, or what’s up? And then to find out… It was wild, because I didn’t know who Evie was gonna be. And then I was Joe and then I got a text from her like, “Hey, guess what? We’re going to be killing zombies.” [laughs] I was like, “What?” And she was like, “This, you know, after I’ve had my baby, the whole thing, this is perfect. The first thing I want to do is kill zombies.”

And we have the greatest rapport. It just felt like, here we are again. And there was chemistry. It’s just like two friends hanging out, except in the apocalypse, you know what I mean? So, we had no problem just jumping into what this was, and she’s such a brilliant performer and a brilliant actress. I could not have asked for a better partner in this show, because this is really different for me. A lot of people expected me… You know, I do a lot of comedies and different things, but I do have a dark side. This was the opportunity for me and I’m thankful to Scott Gimple and Channing and all the Walking family who welcomed me so well in this show.

On the grim aspect, the dog dies right at the beginning of the episode! Which is so sad and so hard to watch. What was it like playing that scene?

I remember having these really, really super love relationships with my pets. I had a dog named Huggy Bear when I grew up. Again, and it was in Flint, and my mother never took them to the vet. And I remember just going, “Mom, I think we got to take him to get some shots or something.” And she just was like, “Yeah, yeah I know.” it’s horrifying, but the dog started to go mad. And it just reminded me of that experience, man. it’s so wild how these things take you right back to a kid, and I remember them coming up to get my dog and… We named him Huggy Bear off of Starsky and Hutch. And I remembered him pulling him away, and I never saw him again. It’s almost deeper than a human bond, because they look at you as like you are their whole world. Oh, my God, the [dog] Gilligan was so good. And what was so crazy, he played an old dog, which was nuts because the dog, he wasn’t old at all. It was just brilliant. I was like, this dog is amazing. Actually, brilliant performance by a Doberman. I’m telling you that right now.

They’re gonna put him up for the Dog Emmys.

That’s what I’m saying. He needs one. [laughs]

It is left open ended there, would you want Joe and Evie to come back? And if so, where would you like them to end up next? On their own show? One of the other shows?

First of all, I would love to do more. What’s so wonderful about this world is that it’s super well crafted. All of the shows from Walking Dead to Fear… I was at Comic-Con and I heard the announcement of the Rick and Michonne series, which just blows me away. I mean, Rick is back, which it’s actually reenergized a franchise to a whole other level, knowing that there’s something coming. So, I don’t know what they’re thinking, but I’m telling you, I’m open to anything. I’m just open and I’m here. I’m willing, let’s say that.

New episodes of Tales of the Walking Dead premiere Sundays at 9/8c on AMC, and a week early on AMC+.

Lea Michele shares first look at 'Funny Girl' rehearsals
I THOUGHT I managed to trick my dad but… ...