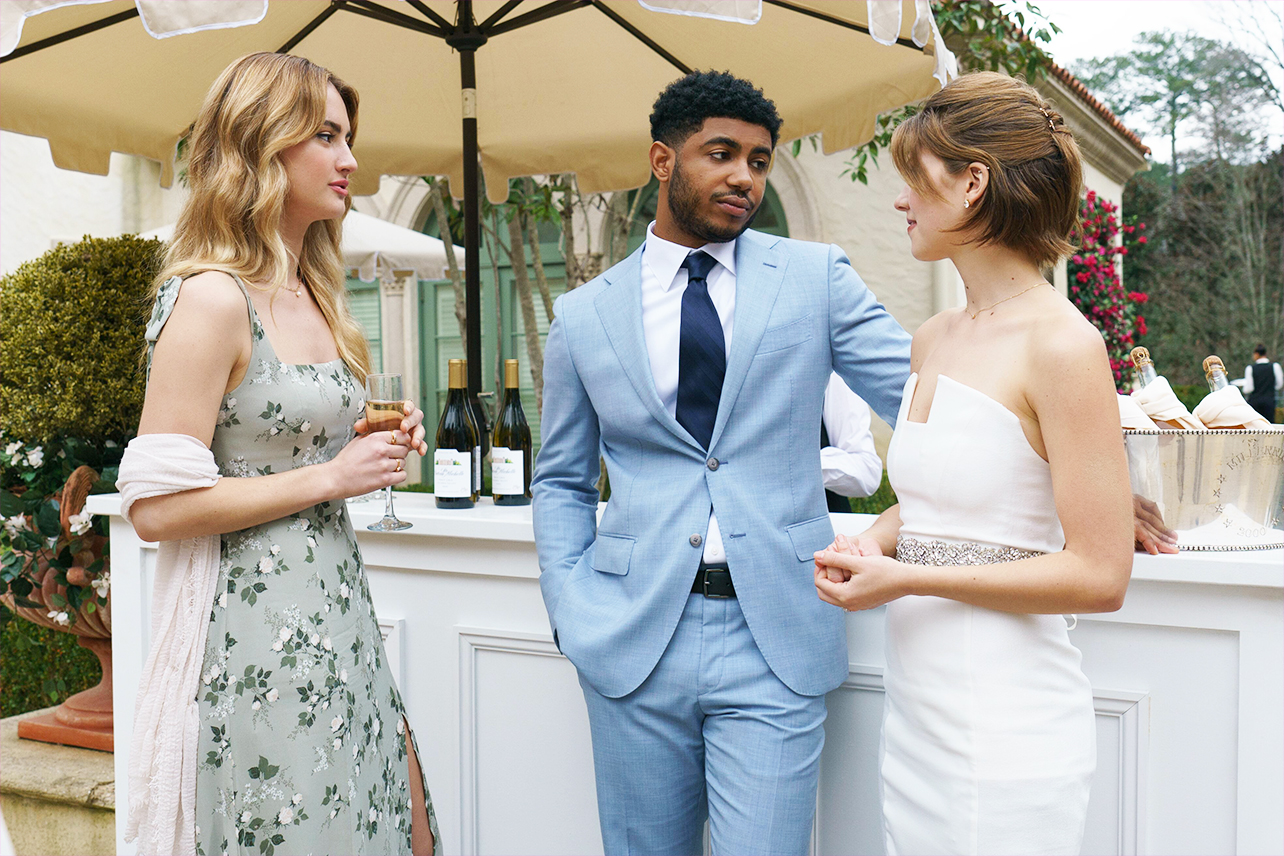 If you’re still recovering from that shocking Tell Me Lies finale, welcome to the club.

Adapted for Hulu by Meaghan Oppenheimer and based on Carola Lovering’s best-selling 2018 novel, Tell Me Lies follows a toxic relationship between Lucy Albright (Grace Van Patten) and Stephen DeMarco (Jackson White) over the course of eight years. Season 1 consists of 10 episodes and is packed with a whole lot of lies, love, college drama, and a major time jump.

Episode 10, “The Bedrooms of Our Friends,” ends on an unexpected cliffhanger and was jam-packed with jaw-dropping reveals. You may be in need of a detailed finale recap, so read on for Decider’s breakdown of the Tell Me Lies ending.

Be warned, major Tell Me Lies spoilers are ahead.

As noted, Tell Me Lies mainly focuses on the toxic romance between college students Stephen and Lucy. But it also follows their complex home lives and relationships with friends. After Lucy’s freshman year roommate Macy (Lily McInerny) tragically dies during Welcome Week, she and her friends Pippa (Sonia Mena) and Bree (Catherine Missal), along with Stephen and his pals Wrigley (Spencer House), Evan (Branden Cook) and Drew (Benjamin Wadsworth) come together in grief and form a complex support system.

As semesters pass, the friend group is tested and shaped by lies, secrets, conflict, sex, and Stephen’s manipulation. At the end of Season 1, we leave the characters on the cusp of summer, then jump years into the future, where they reunite for an important event.

Tell Me Lies Episode 10, “The Bedrooms of Our Friends,” finally shows Welcome Week from Macy’s perspective. We flash back to move-in day September 2007, and Macy is setting up her room when she hears a knock at the door. It’s Stephen.

He welcomes her to campus, they hook up, and he explains that even though they had a fun summer together, they need to keep their connection quiet because he just broke up with his girlfriend Diana. Macy agrees to secrecy, and before Stephen leaves he draws her his signature flower — the same one he drew for Lucy earlier in the series. His parting words are, “I hope your roommate’s not a loser.”

After Lucy arrives and meets Macy, Pippa, and Bree, we relive Welcome Week — and Stephen’s early infatuation with Lucy — through Macy’s eyes. We see Macy asking Bree about her family the first night out, watching Stephen flirt with Lucy at a frat party, looking crushed as the ladies debrief, and texting Stephen to ask why he had to flirt with her roommate. We watch Macy invite Lucy to the party off campus again, but when Lucy declines, we see Macy go alone, start drinking, and call Stephen. He meets her, and they smoke and hook up in the car so no one sees them together. When they’re ready to go home, Macy realizes she’s not feeling sober enough to drive and suggests they find another way back to campus.

Stephen tells Macy he’d drive if he hadn’t been drinking all night. But after realizing Diana might see them together, he takes the keys and assures Macy he’ll be fine behind the wheel. On the drive back, Macy realizes her seatbelt doesn’t work and questions Stephen about his interest in Lucy. She asks why he told her he couldn’t date anyone, only to ask her roommate out hours later, and he argues with her. “Sometimes I feel like you’re just a bad person,” Macy tells him. “You do all of the things a bad person would do.” Just then, Stephen sees a car ahead, swerves, and crashes Macy’s vehicle into a tree.

Once Stephen comes to, he realizes Macy is dead — or close to it — and screams. After a brief moment of grieving, he starts plotting how to get himself out of the situation. He gets out of the car, pulls Macy’s limp body into the driver’s seat, and fastens her seatbelt. He deletes all traces of himself from her phone, apologizes, and leaves the accident scene.

The show jumps to May 2008, where the school year’s wrapping up. Since Stephen is trying to find work to help him pay for housing next year, Lucy suggests he lets her friend Lydia’s dad hook him up with a front desk gig at a country club. Stephen shuts down the idea, claiming a job like that is beneath him. He also throws shade at Lucy for canceling her trip to India to sit at home for the summer.

Stephen checks in with Wrigley who learned he might not be able to play football next and is still avoiding Pippa, who he thinks wrote the incriminating letter about his brother’s involvement with Macy’s death. As a reminder, Lucy wrote the letter. And Stephen knows that, but is perfectly fine with ruining Wrigley’s relationship because he’s still angry he slept with Diana. Lucy even asks Stephen to get Wrigley to stop hating Pippa and he declines. Ugh.

Stephen learns that Lucy lied about hooking up with him the night of Macy’s death to give him an alibi, so he storms to her dorm and they get into an argument. He tells her she has no ambition and she reminds him she loves him enough to keep his secret. They hook up, but when Stephen leaves Lucy calls Lydia, her BFF from home, for comfort. Lydia reveals she broke up with her cheating boyfriend Rob feels so much better now that he’s no longer treating her poorly.

Meanwhile, Evan, who’s also tired of Stephen’s shit, decides to live alone off campus next year. And because Bree is going on a trip with Evan and his parents, she leaves campus early. The rest of the crew heads to a Hawaiian-themed party for one final celebration, where things get extremely out of hand.

Stephen and Diana share a moment together, and she calls his relationship with Lucy into question. “What are you doing? This is the last summer before we graduate. You can’t just hang out in Bayville,” she says. “…Don’t settle for something that isn’t up to your standards. Did you imagine this is where you’d be senior year? In a relationship with a teen whose greatest ambition is hanging out with you 24/7?”

Stephen admits that “everything’s a fucking mess,” and Diana invites him to accompany her to the city for the summer and work as a paralegal at her dad’s firm. “Why do you want to help me?” he asks. “Because I love you,” she replies.

As “Mr. Brightside” by The Killers swells, Diana and Stephen descend a staircase hand-in-hand and strut right past Lucy without a word. As Lucy’s sobbing and taking in her unexpected breakup, Evan comforts her and the two drink Stephen memory away. The next morning, Lucy and Evan wake up in bed together, but before we have time to process, the finale leaps to Evan and Bree’s engagement party where the scenes that kicked off the pilot episode repeat.

Wrigley shows up. Evan makes a comment that suggest Drew died. Lucy tells Bree she’s really happy for her. And then she locks eyes with Stephen across the crowd. He walks over to her and says she looks great, then answers his phone and tells the person on the other end of the line where he is. When Stephen hangs up, he says he’s still not getting used to saying the word “fiancé,” and tells Lucy his date is excited to see her. We’re excepting to see Diana, but the big last-minute reveal is that Stephen’s engaged to…Lydia! Lucy’s old bestie. GASP! “Oh my god, Lucy! It’s been so long. How have you been?” Lydia asks. Stephen stares at them with a mischievous look in his eye, and the end credits roll.

Season 1 of Tell Me Lies is currently streaming on Hulu.