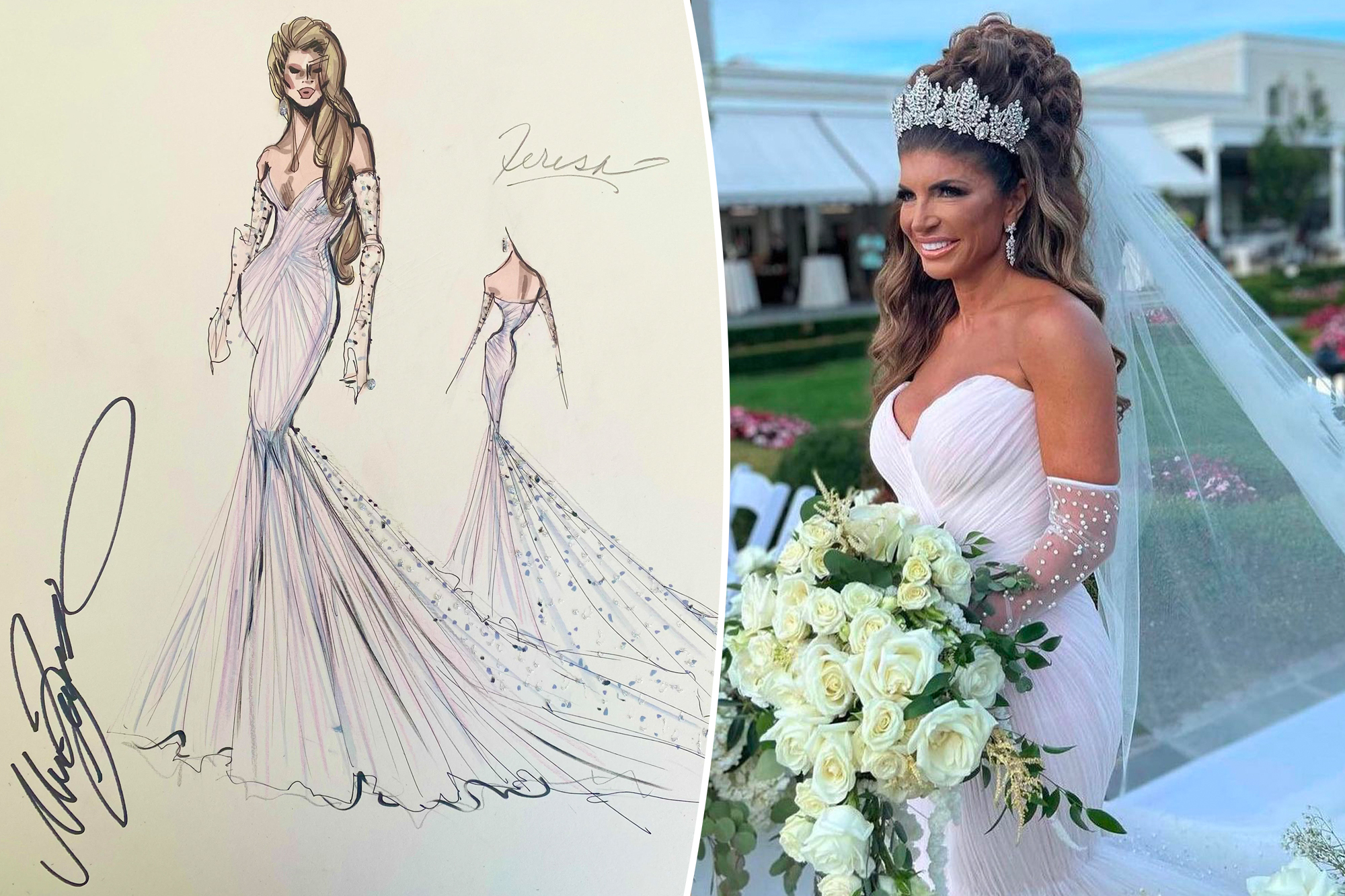 Teresa Giudice looked like a real-life princess during her lavish wedding over the weekend.

The “Real Housewives of New Jersey” star said “I do” to Luis “Louie” Ruelas on Saturday at the Park Chateau Estate in East Brunswick, NJ, with family, friends and co-stars in attendance.

Giudice, 50, stunned in a Mark Zunino gown while the groom looked sharp in a white suit jacket and bow tie.

The OG “RHONJ” star also wore a custom crystal tiara by Bridal Styles Couture and a veil by Bridal Reflections – which was embroidered to match the tattoo she got in honor of her late mother, Antonia Gorga, who died in March 2017.

“The train was over 100 inches long accented in crystal and pearl details with long white beaded evening gloves to match. I wanted to help Teresa pay tribute to her family in some way, so her veil was designed exclusively for her with three large hearts and the Italian phrase ‘Sempre Insieme’ which means ‘Always Together.’”

Zunino continued, “She told me that everything in her life happens in threes, and with the number 3, thus three pink hearts were embroidered over her heart and three ‘3’s’ were embroidered down the inside of her bodice.  All of the elements were designed to help inspire a fantastic future filled with ‘love, love, love’ which Teresa always says!”

The original sketch of her veil detailing. Mark Zunino

Zunino seems to be a go-to for “Housewives” heading down the aisle, having designed wedding dresses for both Denise Richards (when she married Aaron Phypers in 2018) and Tamra Judge (when she wed Eddie Judge in 2013).

The reality star stunned in a lace gown and glittering tiara.

The bridesmaids, which included her co-stars Dolores Catania and Jennifer Aydin as well as daughters Gia, 21, Gabriella, 17, Milania, 16, and Audriana, 12, got ready with Teresa while wearing pink fur-trimmed robes from Lé Lauriér Bridal by Lauren Holovka.

Giudice’s daughter got ready with her while wearing pink robes.

They then changed into blush pink dresses, in different styles, from Cocos Chateau Gowns for the ceremony and reception.

Among those not in attendance was Dina Manzo, who has since relocated to California.

Giudice on the dance floor.

The mother-of-four poses with family and friends after the ceremony.

“They were invited,” an insider told us, noting there was a “very tense ‘Housewives’ finale” filmed one week before the wedding.

Giudice and Ruelas, 48, got engaged in October 2021, one year after the former finalized her divorce from ex-husband Joe Giudice.

While Giudice initially denied that the nuptials would be filmed for Bravo, Melissa hinted that cameras would be rolling for a wedding special.

OBGYN wannabes worry about proper training after Roe V. Wade
How is ‘The Sandman’ Connected to Netflix’s ‘Lucifer’?