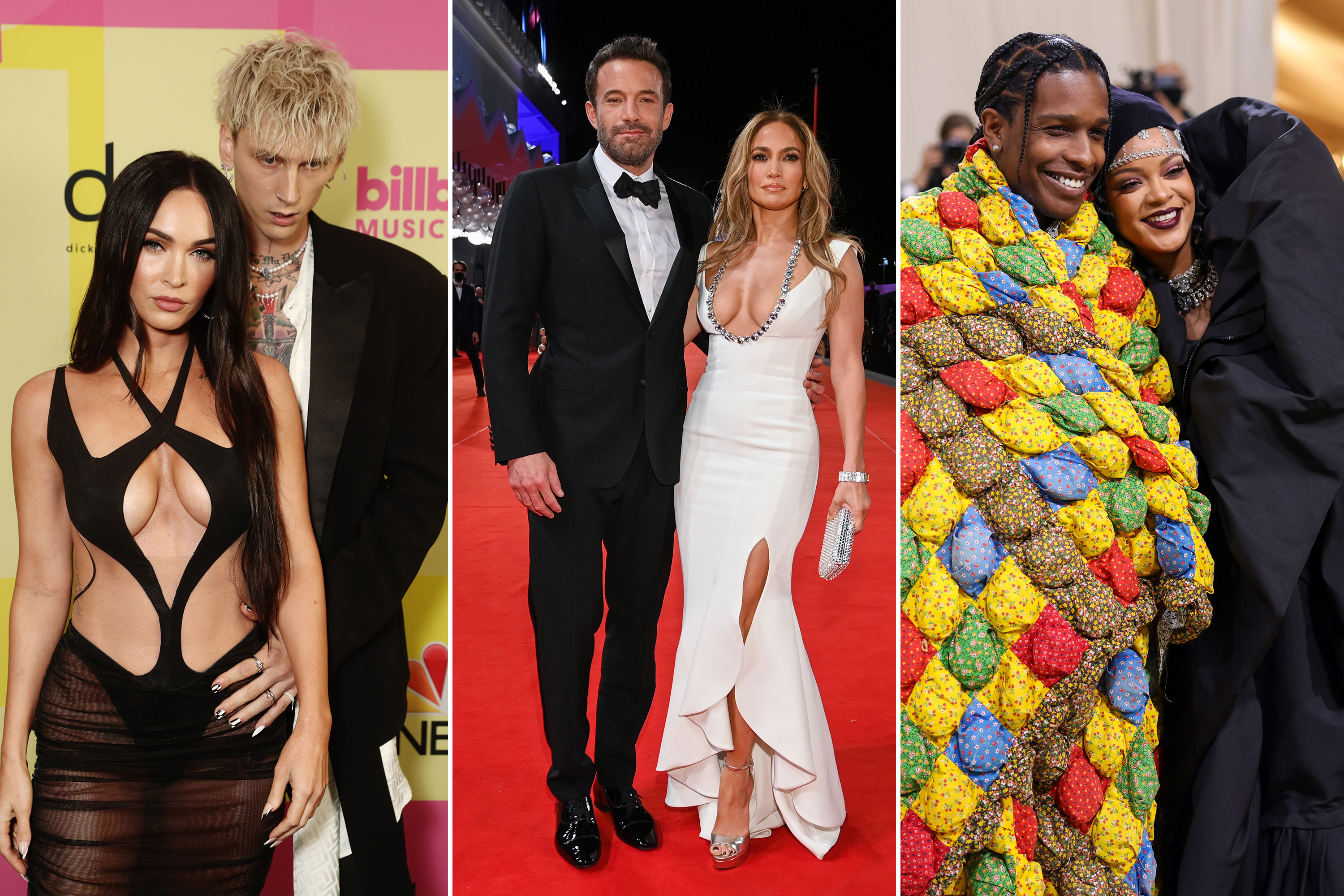 It’s been quite the year for celebrity relationships. Sure, there were a few can’t-believe-it breakups (RIP, Kimye and Zigi) — but 2021 birthed plenty of buzzy new couples too, from Kourtney Kardashian and Travis Barker to (finally!) Zendaya and Tom Holland.

This year even marked the glorious return of our favorite famous Y2K twosome; welcome back, Bennifer!

We also saw some major fashion moments from superstar duos who are still going strong — like Machine Gun Kelly and Megan Fox, who continue to (quite literally) nail it everywhere they go. And who could forget about Rihanna and A$ Rocky, who finally confirmed their long-rumored romance by wrapping themselves in designer duvets at the Met Gala?

Below, our favorite headline-making celebrity couple looks of 2021.

More than a year and a half into their courtship, these “twin flames” are still as hot and heavy as ever. While they’ve coordinated their clothes for countless outings, the duo basically broke the internet at May’s Billboard Music Awards, thanks to Megan’s jaw-dropping cutout Mugler LBD and MGK’s matching painted tongue. A little freaky, yet totally fascinating.

Bennifer’s back, baby, and looking better than ever to boot. Out with the low-rise jeans and Juicy tracksuits, in with the coordinating cashmere!

One glimpse at the couple’s looks from their red carpet debut in Venice — a plunging white Georges Hobeika gown for her, a classic Dolce & Gabbana tux for him — and it’s clear how far these early-aughts lovebirds have come.

The Poosh founder has denied changing her personal style to match her man’s, but she’s certainly embraced darker, edgier ensembles this year. Case in point? The laced-up leather Olivier Theyskens look she chose for her first carpet with Travis at the VMAs, which just so happened to go perfectly with his studded Thom Browne suit. Rock on, you crazy kids.

Rihanna and A$ Rocky

Following years of romance rumors, the Fenty Beauty founder and the “F—kin’ Problems” rapper finally made things official on fashion’s biggest night: the Met Gala, where they closed the carpet dressed in what looked like luxury Snuggies. How’s that for a power move?

Most folks would go the formal route for a presidential meeting, but not the Biebers! For a rendezvous with France’s Emmanuel Macron in June, Hailey opted for an ab-baring body-con dress by LaQuan Smith, while Justin accessorized his striped Celine suit with necklaces and Nikes instead of the traditional tie and dress shoes.

Their laid-back looks might’ve divided fans, but at least they weren’t boring.

Leave it to these two to continue coordinating despite their divorce. Kim, who’s long credited Kanye with introducing her to the fashion industry, hit the Met Gala in a face-obscuring Balenciaga outfit obviously inspired by her ex — so much so that fans assumed he was the mysterious masked man by her side. In fact, it was actually designer Demna Gvasalia, a mutual friend of the former couple’s who also happened to oversee creative for the rapper’s “Donda” events earlier this year.

“Kanye gave her the courage to push creativity and people’s imagination through art,” a source told Page Six Style of the polarizing look. Okay!

We can’t imagine the pressure of standing next to Zendaya on a red carpet — or anywhere, really — but her “Spider-Man” sweetheart showed how it’s done at the LA premiere of their franchise’s latest installment, “No Way Home.” Tom’s double-breasted Prada suit beautifully complements Zendaya’s webby Valentino without trying to outshine it. As if anything could.

Since stepping down from their royal roles and decamping to California, the Sussexes haven’t had many reasons to dress up. As such, it was thrilling to see them back in their black-tie finest at November’s Salute to Freedom Gala in NYC.

Meghan traded the more conservative looks she favored in the UK for a red-hot Carolina Herrera gown with a deep neckline and dramatic train, while Harry looked as dapper as ever in a Giorgio Armani tux adorned with his military medals.

Michael B. Jordan and Lori Harvey

It doesn’t get hotter than this absurdly photogenic (and largely private) couple. While they have yet to make their red carpet debut — fingers crossed for 2022! — Michael and Lori occasionally share snaps of their stylish date-night looks on social media. This standout from February proves head-to-toe black doesn’t have to be boring.